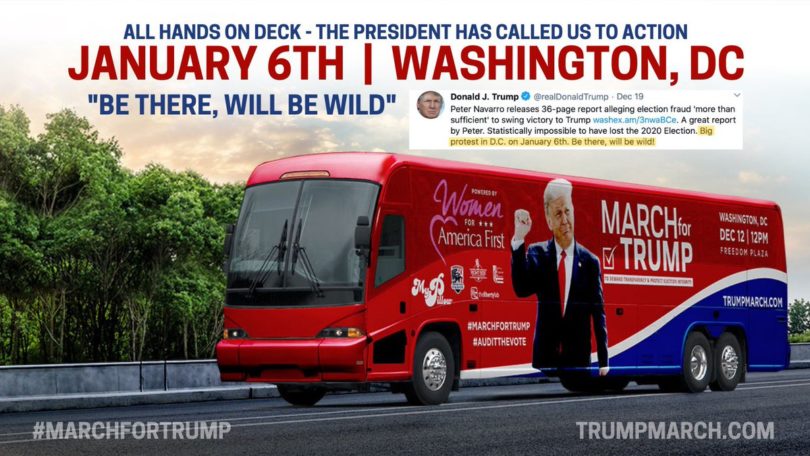 An insightful new Security Council (SC) report circulating in the today discussing events relating to Day 60 of the election war currently raging in America, says first to note is the New York Post being the best to summarize what will be one of the most consequential weeks in American history by them stating yesterday: “With apologies to Mark Twain, reports about the death of Trumpism are premature…At least for a few days more, Donald Trump has license to keep upsetting apple carts in Washington…Just when it seemed the president was roadkill and about to be abandoned by his own party, growing numbers of GOP members of Congress are signing on to a last-ditch effort to challenge the election results”.

Is a summarization describing the remarkable events occurring yesterday showing that President Donald Trump is prepared to do anything needed to save this nation from tyranny, that began by him posting a message to the American people about what is happening and calling it: “An attempt to steal a landslide win…Can’t let it happen!”—that was quickly followed by his message stating:  The BIG Protest Rally in Washington D.C., will take place at 11:00 A.M. on January 6th. Location to follow. StopTheSteal!”—then saw the “March For Trump” website suddenly appearing so the American people can reply to this event—after which President Trump posted a video message urging his tens-of-millions of supports to come and support him with the message stating: –This could be the biggest event in Washington DC history!”.

Actions taken by President Trump against this corrupted and stolen election then joined by the article “The Big Reveal—How Trump Will Change History On January 6th”, wherein it notes numerous troubling facts such as: “Dan Scavino posts “GAME ON” meme, with Pence in the doorway between darkness and light…On Jan 6th, any member of Congress who votes for the Biden slate of fraudulent electors is admitting to complicity in treason and may face arrest and prosecution…Georgia Governor and Sec. of State order the mass destruction of fake ballots, trying to destroy evidence as quickly as possible before they both get arrested and prosecuted”.

All of which are events expected by Security Council Members, who unlike the vast majority of the American people know the truth that under Article II Constitution it makes President Trump the supreme law enforcer in the United States—is a Constitutional mandate that makes every US federal law enforcement agency, intelligence organization and Department of Justice subordinate to President Trump—which means that by himself, and him alone, President Trump has the full authority to criminally have charged and prosecuted anyone found committing fraud in a US federal election.

A fact most assuredly known to the up to 140 of the 211 Republican Party members of the US House vowing to vote against the certification of this election on the grounds that results in some States are not trustworthy, and to US Senator Josh Hawley, who is also objecting to this election’s certification—all of whom know that to certify a corrupted and stolen election is a grave US federal crime—though most astonishing to notice, are socialist Democrats now calling Senator Hawley’s objection to certification a “coup attempt”—the same socialist Democrats who have themselves objected to every Republican presidential vote certification this century

Though to understand why socialist Democrats are really in terror about Senator Hawley’s objection, Security Council Members this past week noted is because it means that 6 January will become one of the most consequential days in American history, as it puts the never used, untested and maybe unconstitutional law known as the Electoral Count Act of 1887 on a direct collision course with the 12th Amendment (aka Contingent Election) to the Constitution of the United States of America, which is the supreme law of the United States—with the critical difference between them being that while the Electoral Count Act of 1887 says a majority vote in the US House of its members can rule on objections, the 12th Amendment orders this vote in the US House to made by its State delegations—and is a US House whose majority members belong to the socialist Democrat Party, but whose Republican Party members comprise the majority of State delegations 26 to 24.

US federal law vs. Constitution facts most certainly known about by US Senator Ted Cruz, who is a renowned constitutional legal scholar—and is critically important to notice because immediately after President Trump sent out his historic messages yesterday, they were followed by Senator Cruz publishing the astonishing document: “Joint Statement from Senators Cruz, Johnson, Lankford, Daines, Kennedy, Blackburn, Braun, Senators-Elect Lummis, Marshall, Hagerty, Tuberville”—an unprecedented and historic document wherein eleven current and incoming Republican Party US Senators said they would vote to reject the Electoral College votes of some States on 6 January as “not lawfully certified” unless the US Congress appoints a commission to conduct “an emergency 10-day audit of the election results”—would be a 10-day audit with “full investigatory and fact-finding authority”, and afterward “individual states would evaluate the Commission’s findings and could convene a special legislative session to certify a change in their vote, if needed”—and just minutes after this document was published, then saw Vice President Mike Pence’s chief of staff Marc Short releasing an announcement stating: “Vice President Pence shares the concerns of millions of Americans about voter fraud and irregularities in the last election…The Vice President welcomes the efforts of members of the House and Senate to use the authority they have under the law to raise objections and bring forward evidence before the Congress and the American people on January 6th”.

Stunning and obviously coordinated events that, in turn, ignited a leftist mainstream propaganda media firestorm, best exampled by the New York Times screaming: “Neither Mr. Pence nor any of the senators who said they would vote to invalidate the election has made a specific allegation of fraud”, and the Washington Post crying: “Trump has made plain his goal with the certification process: to overturn the results of an election he insists was “rigged,” though he has produced no evidence to support that claim”—leftist rage-filled screams and cries, however, having nothing whatsoever to do with facts or reality, as the specific allegations of fraud in this election are overwhelming, and the evidence to support these allegations of fraud have indeed been produced in multiple US federal and State courts, though nearly all of them have been dismissed without any of this evidence being heard—and are election crimes so numerous, dangerous to democracy and blatant, former top CIA official Robert Caron has now assembled a task force of over 400 ex-intelligence officers from the FBI, CIA, Military Intelligence, DIA, and National Security Agency to investigate how this could have happened and who was behind it.

All of which is occurring at the exact same time multitudes of Americans are beginning their travels towards Washington D.C. to be there on the historic day of 6 Janaury, and is now being said about: “From what can be ascertained from social media and inbound grassroots communication to CTH, this is shaping up to be the largest DC gathering in recent history”—and who yesterday gathered themselves into the thousands from sea…to shining sea.  [Note: Some words and/or phrases appearing in quotes in this report are English language approximations of Russian words/phrases having no exact counterpart.]