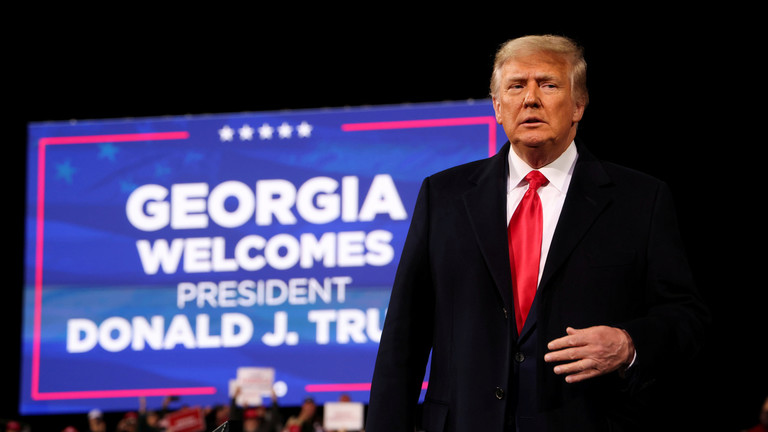 President Donald Trump has reportedly filed lawsuits against Georgia’s secretary of state after a call was leaked to the media in which he seemingly demanded that officials “find” votes in his favor to flip the state.

“President @realDonaldTrump has filed two lawsuits – federal and state – against @GaSecofState. The telephone conference call @GaSecofState secretly recorded was a ‘confidential settlement discussion’ of that litigation, which is still pending,” David Shafer, Georgia Republican Party chairman, tweeted on Sunday, shortly after the Washington Post, the New York Times, CNN and other media published a recording of Trump’s wide-ranging call with Georgia Secretary of State Brad Raffensperger and a host of other officials, as well as his campaign lawyers.

President @realDonaldTrump has filed two lawsuits – federal and state – against @GaSecofState. The telephone conference call @GaSecofState secretly recorded was a “confidential settlement discussion” of that litigation, which is still pending.

White House Chief of Staff Mark Meadows, conservative lawyer Cleta Mitchell, and Georgia-based attorney Kurt Hilbert were on Trump’s end of the receiver, while Raffensperger was joined by his office’s attorney Ryan Germany and Deputy Secretary of State Jordan Fuchs.

The recording given to the media by @GaSecofState begins immediately after Mark Meadows states that the call is for the purpose of discussing the settlement of pending litigation. https://t.co/gnZk9MH5DZ

Shafer tweeted that the purportedly complete recording of the call, released by the Washington Post, was in effect “heavily edited” and failed to include the part where Meadows allegedly stated that it was “for the purpose of discussing the settlement on pending litigation.”

ALSO ON RT.COMIn call LEAKED to media, Trump ‘pressures’ Georgia sec of state to re-examine election results, ‘FIND’ votes to overturn Biden winThe Washington Post, however, denied that they somehow tampered with the recording, insisting that they have published “the entirety of the call, from start to finish.”

“There is no mention of it being a confidential settlement meeting. None,” WaPo’s political reporter Amy Gardner tweeted.

The call lasted about one hour, and focused exclusively on the issue of election fraud, with Trump accusing Georgia electoral officials of not doing enough to uncover multiple alleged irregularities. The president has repeatedly referred to “shredded ballots” in Fulton County and elsewhere, and cited reports “of dead people” on voter rolls. He has also doubled down on his campaign claims that Dominion voting equipment was somehow involved in the plot to tip the vote in Biden’s favor, alleging in the call that the company was “moving fast to get rid of their machinery.” Germany, however, rejected the assumption, answering “No” when asked if that was the case.

Throughout the conversation, Trump insisted that he had won the state by a large margin, in contrast to the 11,779 votes by which he officially lost.

“I’m just curious, why wouldn’t, why do you keep fighting this thing? It just doesn’t make sense. We’re way over the 17,779, right?” Trump told Raffensperger, saying that he “just” wants to “find 11,780 votes” – as opposed to tens of thousands more he believes he received in Georgia.

ALSO ON RT.COMEx-House speaker Paul Ryan takes heat from both sides after blasting GOP senators’ effort to challenge Biden’s victoryCloser to the end of the discussion, Trump appeared to lay the blame on Raffensperger for a potential loss in the Senate Georgia runoffs, saying that people would not turn out at the polls because of what he “did to the president.” Trump then suggested Raffensperger takes into account his grievances and amends the “faulty election results.”

“And I think that it is really important that you meet tomorrow and work out on these numbers,” he added.

Since it was released, the call has sparked a flurry of accusations against Trump, with critics accusing him of arm-twisting Georgia’s secretary of state into overturning the vote. Some suggested that Trump, who is set to leave the Oval Office in less than 20 days, should face another impeachment procedure over his alleged abuse of power.

Yes, Trump should be impeached again. But Republicans should actually remove him this time.