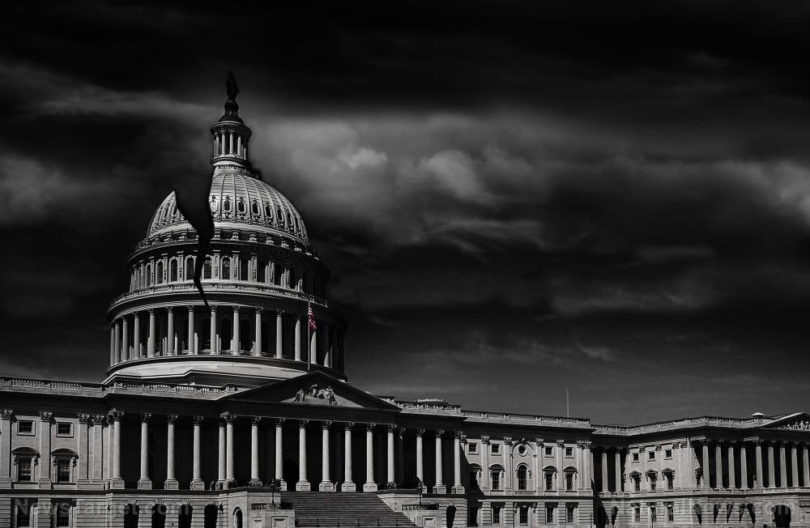 Today’s “storming” of the Capitol Building has already been confirmed as a false flag operation run by Antifa / BLM troops and pre-coordinated with Capitol Police as a way to discredit Trump supporters in the media.

We now know that the people who led the storming of the building are the very same people who have previously been photographed as active individuals at BLM rallies, matching their tattoos, facial hair and even worn equipment.

In addition, Antifa / BLM operators were transported to the event for the sole purpose of carrying out provocateur / false flag operations. “According to a former FBI agent on the ground at the US Capitol, at least one bus load of Antifa goons infiltrated the Trump rally as part of a false flag operation,” reports The Gateway Pundit.

Eyewitness reports one of the first people to break a window at the Capitol wearing a US flag shirt but took it off and tossed it in bush after. Others in dark clothing urging people to rush forward, starting anti-govt chants in crowd.

Now, we have learned that the treasonous Congress, led by traitors Nancy Pelosi and Mitch McConnell were secretly plotting all along to complete their act of betrayal against America under the cloak of night.

They have issued a press release found at this link, from the office of the Speaker of the House (Pelosi):

It begins, “Dear Colleague to All Members on Continuation of the Joint Session of Congress” and then claims the attack on the Capitol Buliding was a “shameful assault on our democracy,” blaming it fully on President Trump.

Then the letter explains how treasonous members of Congress plan to vote to accept the fraudulent Biden slate of electors later tonight, after Capitol Police had cleared out the protesters with tear gas and by shooting at least one unarmed protester in the neck. From the letter:

To that end, in consultation with Leader Hoyer and Whip Clyburn and after calls to the Pentagon, the Justice Department and the Vice President, we have decided we should proceed tonight at the Capitol once it is cleared for use. Leader Hoyer will be sending out more guidance later today.

We always knew this responsibility would take us into the night. The night may still be long but we are hopeful for a shorter agenda, but our purpose will be accomplished.

They planned this all along

First, they use BLM and Antifa operatives to “storm” the Capitol Building with the help of police, who coordinated the entire thing. Watch the following videos that show the Capitol Police openly ushering “protesters” into the build. They actually invited them in!

You can then see from this video that they were allowed to stream right in, without any police attempting to stop them:

Once the “storming” was complete, the Capitol Police deployed tear gas to remove all the protesters, while Trump was forced to tell everybody to go home.

With the Capitol Building now cleared out, they call the joint session of Congress back into existence, with no one around to observe what they are doing, and they commit their final act of treason against America by accepting the Biden slate of electors to install CCP puppet Joe Biden as president.

Note that this is exactly how they rigged the elections in the first place: By removing all GOP observers, blocking windows and acting like they had “paused” the counting when, in reality, they re-convened the rigged counting in the middle of the night and kept feeding fraudulent votes into Dominion machines until they had produced enough votes to “win.”

This is how Democrats and the deep state operate: It’s 100% staged, always carried out in the dark of night, always based on deception, false narratives and a complicit media that’s happy to lie to the American public.

Your country is being stolen from you tonight. They are doing it while they think the nation is asleep. And by the time you wake up — just like on November 4th — you will discover that you’ve lost your country to a group of pedophile criminal thugs who desire power above all else.

Pray for God to intervene, or this nation is finished at the hands of filthy, treasonous betrayers like Mike Pence and Mitch McConnell.