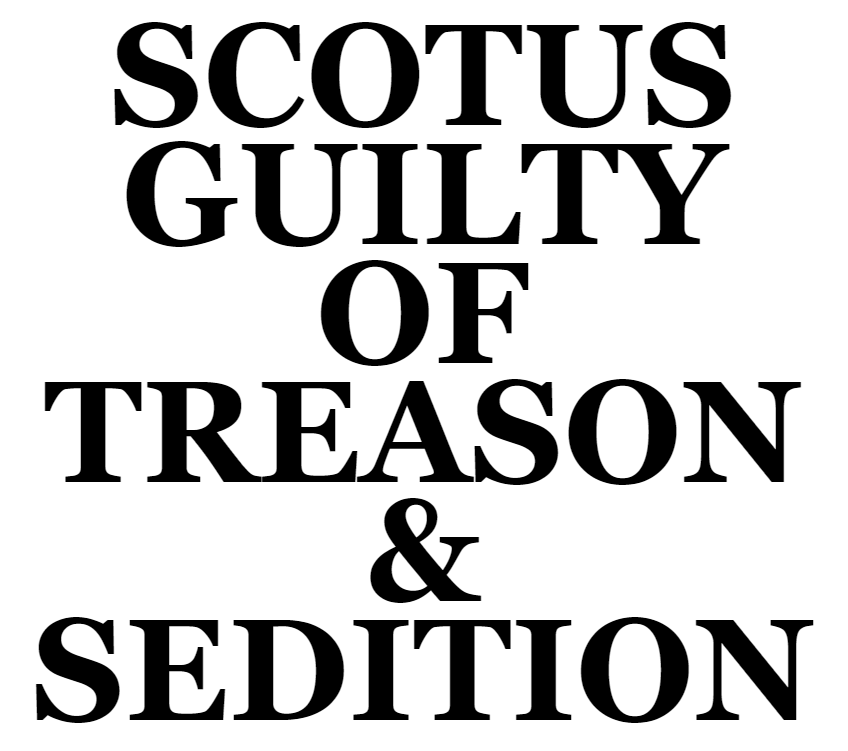 This long overdue exposé is still very much a work in progress. However, in view of the recent SCOTUS decision to Throw Out Texas Lawsuit Against Pennsylvania, Georgia, Michigan and Wisconsin, the raw truth must be revealed.

No matter how one views it, the U.S. Supreme Court is populated with treasonous communists and seditious cultural marxists.

In point of fact, this extremely grave matter concerning the current constitution of the U.S. Supreme Court has to do with Nationalism versus Globalism; and Patriotism versus Communism.

The current membership of the SCOTUS is clearly weighted toward the Globalism and Communism. With the exception of Justice Clarence Thomas and Justice Samuel Alito, it’s clear the high court is a nest of closet communists and traitors.

This stark reality poses a HUGE problem for the continuity of the American Republic as evidenced by the utterly corrupt ruling on the Texas election lawsuit. As follows:

Very few laymen are aware, but whenever a court — ANY COURT — wants to expeditiously throw out a lawsuit, they often lean on the arbitrary and frivolous justification known as “LACK OF STANDING”.

As a matter of historical fact, more legitimate cases have been brought before more courts at every level in the USA which have been swiftly rejected using this transparently dismissive and unjust ruling.

Because the Texas election lawsuit presented such a strong case, the Left-leaning SCOTUS knew they had to knock it off the docket—FAST!  Hence, the globalist justices knew just how to frame their decisions both individually and collectively: “LACK OF STANDING”.

Of course, throughout the legal arena, such a nakedly capricious ruling is always code, especially for the plaintiff: Don’t even think about resubmitting your lawsuit before the court no matter how meritorious it may be.

This form of denial of the most compelling and legitimate legal cases has been used by the New World Order globalist cabal for many decades.  In this way, the SCOTUS has been systematically used to greatly advance the NWO agenda, particularly those having to do with the rapidly expanding Cultural Marxism and Communism in America.

These two highly destructive pillars of the globalist’s NWO platform are being implemented at breakneck speed to collapse the American Republic by profoundly undermining the territorial integrity of the United States as well as by destroying national sovereignty with every SCOTUS ruling. 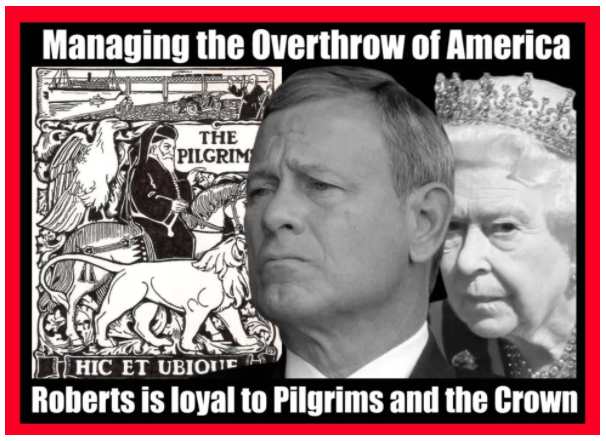 The most recent and corrupt incarnation of the Supreme Court of the United States began with the highly unusual appointment of John Roberts.

The following data point is essential to understanding the extraordinary degree of complicity Chief Justice Roberts has in the ongoing attempt to overthrow President Donald Trump:.

Then there is this weighty historical fact of American political life:

On September 5, 2005, President George W. Bush announced that he would nominate Judge John Roberts for the position of Chief Justice of the Supreme Court of the United States, to succeed William H. Rehnquist, who had died two days earlier.  Roberts had been nominated to replace retiring Associate Justice Sandra Day O’Connor; however, following Rehnquist’s death, that still-pending nomination was withdrawn (Samuel Alito would ultimately be O’Connor’s successor).[1]

So just to be clear, Chief Justice John Roberts was appointed by a former CIA Director, hardcore globalist and perfidious POTUS George H.W. Bush in a blindsiding gambit that saw a total neophyte with a long history of brain seizures and surgeries elevated to the most powerful judicial position in the world overnight…as in under cover of darkness.

What follows is a WaPo headline that was published as recently as July of 2020.

Then there is this NYT headline from July of 2007.  Why do these seizures always seem to happen in July, by the way?

Chief Justice Is Hospitalized After Seizure

In light of this very serious medical history, how and why, REALLY, did John Roberts get installed in the most powerful and influential office in the land after the POTUS. See: How did John Roberts get appointed to SCOTUS Chief Justice with a long history of epileptic seizures, brain surgeries and falls?! 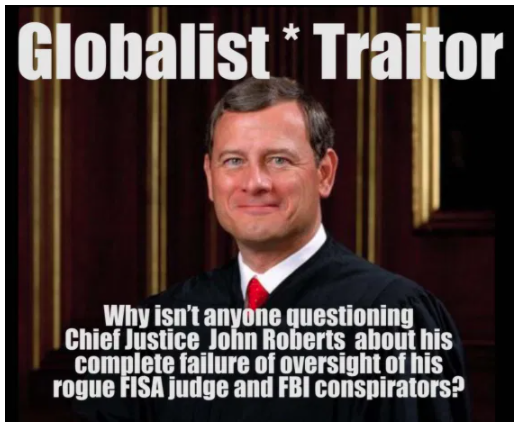 Chief Justice Roberts is not only on powerful psychoactive pharmaceutical medications, brain surgeons have had a LOT of access to his brain over the years by which to implant the most advanced mind-control and thought manipulation technology.  To control a subject like Roberts is a piece of cake as the CIA’s MK-ULTRA mind control program clearly proved.  Enough said.

Back to “SCOTUS GUILTY OF TREASON & SEDITION

Everything now points to the great likelihood that President Trump was [EXTREMELY] deceived into appointing THREE (3) SCOTUS justices who are really died-in-the-wool globalists. See: “All three Trump appointees were traitors and sided with the Communists.”

Neil Gorsuch, Brett Kavanaugh and Amy Coney Barrett all cut the political profiles of being stealth candidates who will flip just like John Roberts and Anthony Kennedy did.

As a matter of fact, all three just did flip!  And they did so regarding the most important judicial decision of their careers.  So what else needs to be said.

This mysterious part of the story requires much more in-depth treatment which will be covered in a follow-up article.  In the meantime, the following highly consequential investigative report is provided for the education of the SOTN readership.  It graphically elucidates why BAR-registered attorneys were explicitly prohibited from holding public office in the United States by the Founding Fathers.  It also cogently explains why this Supreme Court is hopelessly corrupt and treacherous.

The Missing 13th Amendment: *No Lawyers Allowed In Public Office*

Bottom Line: In truth, the American people are facing a much greater problem than just a Supreme Court that is completely controlled by the New World Order globalist cabal.  That the American legal profession and judiciary are heavily dominated by exceedingly activist judges who are variously lifelong and hardened Democrats and Socialists, Liberals and Progressives, Communists and Bolsheviks, Extreme Left-wingers and Anarchists is the real nationwide calamity.  Read this for further edification: How The Lawyers Destroyed American Society … …and Corporate Attorneys Devastated the Planet

If the highest court in the land will not address the greatest voter fraud and election theft in U.S history, then who will?

The SCOTUS has proven itself to be irrelevant and impotent.  It is also the most crooked court in the land and, therefore, certainly not deserving of the respect and deference that so many folks pay it.

The upshot of this profound betrayal of the American people is that We the People will be forced to take matters into our own hands.  For it is the governed who give their consent to the government; and the governed who can withdraw that consent in a D.C. flash.  Consider it done as a result of that catastrophic Texas suit ruling.

President Trump said it best when he tweeted the following:

“The Supreme Court had ZERO interest in the merits of the greatest voter fraud ever perpetrated on the United States of America.”

Which means that the Patriot Movement will soon be compelled to ensure that justice is done where it concerns the outcome of the 2020 POTUS election.  This nation simply cannot permit the true winner, who won a record 80 million votes, be deprived of his legitimate victory by a stone-cold election thief and the Democrat party.

Were such an injustice to stand, this nation would cease to exist and will shortly devolve into the Banana Republic that Obama, Clinton, Biden, Harris et al. are desperately pushing for.

Pray for justice like there’s no tomorrow, because if the Creator does not move some mountains quickly, there may not be a tomorrow!  And, even though the SCOTUS just ruled quite unrighteously: 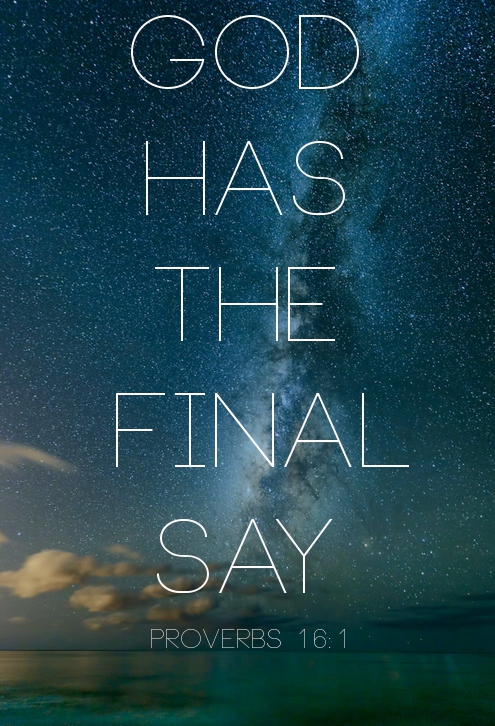 SOTN Editor’s Note: This Alt Media platform has predicted right along that the Right could only count on SCOTUS Justices Clarence Thomas and Samuel Alito to do the right thing.  This realistic state of affairs is, perhaps inscrutably to most Patriots, giving US an excellent and timely and priceless opportunity to take back our country.  More to come on this absolutely vital Patriot Movement initiative. For example: We Don’t Need SCOTUS to Win