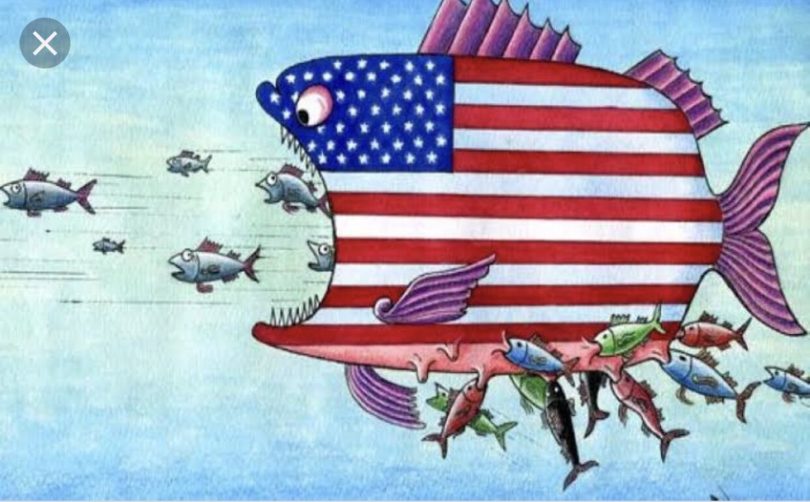 Foreign policy got short shrift in the two years that we spent choosing a President. It is hard to remember a single point of debate amidst the millions of words and dozens of candidates that struggled for our attention – the psychodrama of fictive Russian interference aside. That is entirely understandable. For the American political class is of one mind about our dealings with the rest of the world. Be it China, be it Russia, be it fealty to Israel, be it dedication to preserving the oligarchies of Latin America, be it turning the Middle East into a bastion of military power and political control across the region. The nuclear treaty with Iran (the JCPOA) is the one exception. Even on that issue, there is scant dissent from the twin propositions that Iran is a hostile state that threatens our vital interests and that the Islamic state’s disappearance would remove a serious anathema.

So pervasive is this consensus that the foreign affairs community has developed something that approximates herd immunity to critical thinking. Political elites, think tankers, and consultancy gurus all sing in chorus from the same hymnal. Such differences as exist are barely noticeable variations on the fundamentally same threat assessments or on tactics for countering those alleged threats. Strategy is nowhere to be seen. The ponderous reports and studies that issue from the government’s security agencies or the plethora of institutes that crowd each other in Washington’s confined intellectual space vary more by poundage than by contents. They nearly all confuse the inventorying of threats with a reflective appraisal of how the international system is configured and our place within it. Consequently, we lean on coercion in its various forms instead of diplomacy – with a couple of exceptions, e.g. talking with the Taliban. That is applied to allies as well as to rivals. Moreover, this crudest of power politics approaches lacks even a semblance of design or coherence in implementation. It seems to emerge unfiltered from the reptilian part of our brain. As to method, observing American foreign policy actions is akin to watching a pick-up squad of Jackson Pollacks throwing paint at a canvas.

It is mistaken to expect anything drastically different under the Biden administration. Style may change – less bombast and insult; substance will remain essentially constant, though. For all the propositions noted here are applicable to the team assembled by Biden. They demonstrated that when working under Clinton and Obama. This uninspired assemblage of retreads stands out for their intellectual uniformity and absence of independent thought.

Here is some context.

For the past 18 years, the United States has been battling to establish global hegemony. The project’s failings, some ignominious, expose its brittle foundations and flawed design. Yet, there is an odd silence as the audacious enterprise risks coming to grief on every front. Americans who, for the most part, had no idea what they were getting into remain oblivious both to what has befallen the country and the consequences. The two phenomena are intimately related.

The British Empire, it is said – albeit incorrectly – was built in a fit of absentmindedness. America’s bid for world mastery has been marked by self-delusion and willful ignorance. How this misadventure came to pass needs to be delineated before memory dissolves in the mists of history – especially since the past has become so unpredictable. A preliminary effort to do so was made in an earlier commentary on the NEO-CONS & friends. Let us continue by enumerating what is distinctive about this singular affair of historic consequence.

First, there is the sheer magnitude. American military forces are now engaging ‘the enemy’ from the jungles of interior Honduras to the barren plains of Somalia, from the sands of Mali’s Saharan borderlands to the Hindu Kush, from remote ‘black sites’ where the baddest bad guys remain incarcerated to CIA operations in Iran’s Baluchistan, from bases in Britain to bases in Patagonia (yes), from the hovels of the Congo to the dusty hamlets of Helmand province; from Kiev to Rio to Caracas to Tripoli. The scope of the battlefield equals that of World War II.

Second, ‘the enemy’ bears many names – the list grows almost weekly. It began with al-Qaeda holding pride of place in the immediate wake of 9/11. Soon, Afghanistan and other violent jihadist groups were added. With the Iraq invasion and occupation, accompanied by designation of the ‘Axis of Evil,” the genie’s lamp was lit. For the first years of the Global War on Terror, many of the threatening agents were mysterious and identification elusive. We heard of ‘international criminal organizations, Islamo-fascism, narco-states, rogue states, WMD precursor proliferation, transnational terrorism – of course; and then the more academic euphemisms: cyber-terrorism, the new world disorder, etc. As the list grew, the ‘enemy’ started to show the symptoms of multiple personality disorder. In the Middle East, where so many of these ‘enemies’ reside and whose perceived menace grows as we deploy troops in every accessible backyard, their personalities merge, separate, wax and wane. (Iraq: enemy/ dependent stooge, suspect, dependent, ally, suspect). With an enemy at once elusive and omni-present, danger is eternal and victory indefinable. Only total control of the external environment could eliminate the former and secure the latter. That means America must mobilize all its powers and deploy them globally, i. e. hegemony.

Third, over time, the sense of danger becomes generalized and systemic. Fear turns to dread – it becomes free floating. That means it is fungible, easily shifted from one reference point to another. Beginning in 2012, we tacitly allied with al-Qaeda in Syria, even arranged for arms supply. Yet, the dread holds constant as it is displaced onto Russia, China, North Korea, Iran as well as the Islamic State. In this psychological process, the objective truth of the real world is overwhelmed by the subjective virtual truths that shape our perception of reality.1

Psychological entrenchment is matched by institutional entrenchment. Whole industries have been created de novo to serve the cause: purveyors of anti-terrorist nostrums, nation building projects galore, democracy promotion consultants, private militaries for hire, escort services offering gun-toting anthropologists and psychologists, and the inescapable market makers for derivatives of the Great Threat(s). This reinforces the inertia – in intellectual and policy terms.

Fourth, the goal and the strategy for achieving total security have not been clearly enunciated by persons who animated them. That has been true under three successive presidents. There is more proclivity than there is strategy; more least common denominator convergence than coherently crafted, unitary plan. The confluence takes the shape of a self-conscious devotion to ensconcing the United States’ dominance by Americanizing the world. The currents that form it are these: Some prefer to achieve that end by merchandizing knock-off versions of the American Dream. Some blandish the lure of Freedom and liberation from whatever irks peoples. Some advocate ‘pro-active’ approaches that stress the stick rather than the carrot – applied “for their own good.” Those aim to exploit American muscle. Some promote the “good deed’ strategy of sheltering the oppressed – when they happen to be endangered by governments who coincidentally are not obedient to Washington. The current Trump bunch are enamored of insult, intimidation, and coercion by various means. They all encourage unilateralism, whether masked behind the façade of American controlled organizations or by freelancing (the Trump preference).

Unilateralism in its present form features actions that aim at once to establish dominance and to demonstrate it. Hence, the emphasis on doing unparalleled things that advertise American control and the weakness of Washington’s subordinates. The United States, in effect, declares all disobedience to American dictate as illegitimate. Insurrectionists against our occupation of Iraq are denounced as “anti-Iraq forces. Similarly, the Taliban and Haqqanis are anti-Afghanistan forces, Assad ‘s army is an anti-Syria force, the Houthi-led coalition is an anti-Yemen force, the al-Shabab are an anti-Somali force, the sovereign Maduro government an anti-Venezuelan force because it resists the pretension of the GQ pretty boy we arbitrarily promote as President. Anyone who comes to their aid is denounced as an outlaw.

An ancillary proposition is that the U.S. will undercut any cooperative organization that strengths the influence of its members since such a formation might countervail America’s power to dictate to the weaker: the European Union, the Commonwealth of Independent States, the Chinese ‘Silk Road’ project.

A number of core premises underlie this aggressive way of handling foreign relations. They are shared by many non-Trumpites- including key Biden appointees: