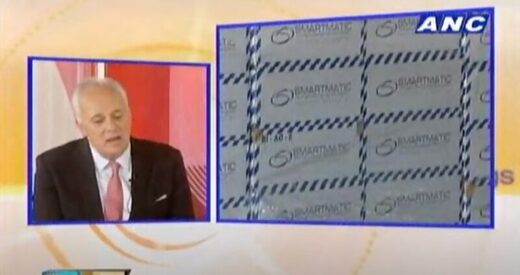 Despite voter tech firm Smartmatic’s insistence that it has “no affiliate relationships or financial ties” with the foreign-owned Dominion Voting Systems, the company Chairman has previously admitted during interviews that “part of our technology is licensed from Dominion.”

The news will raise further questions as to why both Dominion and Smartmatic have gone to recent lengths to distance themselves from one another, following allegations of corruption during the 2020 U.S. elections.

Recently, the pair claimed they were competitors in order to deflect from the idea that their technologies were both used to defraud people in the United States. The National Pulse soon after revealed that the companies actually have a non-compete agreement.

Malloch-Brown is pressed by the interviewer about difficulties experienced with Smartmatic products in the 2010 election, when he reveals that Smartmatic has a “license for the international use of that particular piece of the technology that we employ”:

Host: “It was never supposed to be allowed to bid in the 2010 elections because it did not actually own the software – Dominion Voting Systems owned the software. Plus the difficulty which Smartmatic had to put the COMELEC through just in order to access the source code.”

Malloch-Brown: “Well, look. I think that’s competitors who say that. The fact is, yes part of our technology is licensed from Dominion, but you tell me a large technology company which isn’t using in part licenses from other companies. We have a license for the international use of that particular piece of the technology that we employ.”

The interviewer follows up by inquiring if “the license issued by Dominion for you to use their proprietary software” is “live,” “active,” “and has not been revoked.” Malloch-Brown confirms all three answers are “yes.”

When moving to New York, Malloch-Brown rented his home from Soros, for what critics allege was priced below market rate.

Noting “they are good friends,” a United Nations spokesperson described the arrangement, as “since both are public figures, they decided to set up the living arrangement as a commercial transaction, rather than a gift.”

In 2007, he was appointed Vice-President of Soros’s Quantum Fund as well as vice-chairman of Soros Fund Management and the Open Society Institute in the same year.

Despite this, Smartmatic maintains it “has no ties to governments or political parties.”