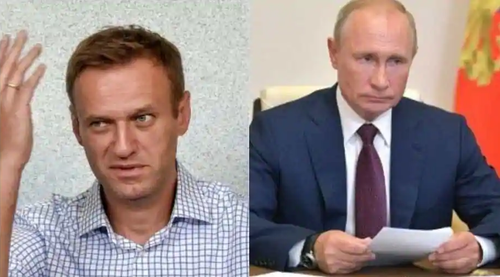 In rare new comments in response to widespread allegations from the West that Russian opposition figure Alexei Navalny was poisoned by Kremlin agents, President Vladimir Putin told reporters at a major annual news conference Thursday that he simply wasn’t important enough to be a target.

“It’s a trick to attack the leaders (of Russia),” said. “But that absolutely does not mean he needs to be poisoned,” he noted. “Who needs him?”

And in perhaps the most provocative and mocking statement, Putin added, “If someone had wanted to poison him they would have finished him off.”

Throughout the comments Putin avoided mentioning Navalny directly by name, only calling him “the patient from the Berlin clinic.” All of this comes after a new report by self-styled ‘open source’ UK-based investigator Bellingcat, which alleged the FSB ran the operation. In October the EU imposed sanctions on a half-dozen top Russian intelligence officials believed to be connected to Navalny’s near-death.

Navalny has in recent interviews described the ordeal as a political assassination attempt which came from the top – from Putin himself.  In August he was airlifted to a Berlin hospital after being poisoned, supposedly with a Soviet-produced nerve agent of the Novichok family.

Putin on Thursday brushed that aside as ludicrous. This after multiple Russian media reports underscoring that much of the domestic population had never heard of Navalny before this saga, and certainly very few outside of Russia had. Further, Russian critics of German investigators and the allegations of US officials question why Russian intelligence would use an agent so “obviously” traceable to Russian military and intelligence.

Putin says if Russia wanted to kill Navalny, it would've "finished" the job. Experts say Novichok could take up to 12 hours to affect the nervous system. Short of injecting it directly, it's almost impossible to dose so as to incapacitate rather than kill.https://t.co/Ym0beFNQqc

Another interesting exchange with a BBC reporter during the annual press event where the Russian leader fields a variety of open-forum questions came as follows:

The BBC representative asked a question about reasons for worsening relations between Russia and the West and wondered whether the Russian leader felt himself responsible for it, at least partially, or Russia is “harmless and squeaky-clean.”

He concluded with noting that the West’s foremost military alliance lied about post-Cold War promises made in the 1990’s. “We heard your assurances that NATO won’t expand to the East but you didn’t keep your promises,” Putin charged.