On Monday, Charlie Kirk interviewed former Kansas Attorney General Phil Kline of the Amistad Project, on his Got Freedom show. The interview starts at the 41:00 minute mark, but a bombshell is dropped by Kline at the 43:15 mark, where he reveals how Facebook CEO Mark Zuckerberg’s contributed $400 million to a leftist group that was used to give Democrat-stronghold areas, especially in critical swing states, an advantage in the November election.

At the 1:04 mark in the video, Kline reveals how the Democrats stole ballots from Americans. He explained how “third parties,” specifically Rock the Vote, were given “front end access” to voter rolls by Democrat Secretary of States where they actually had the ability to add names to the voter rolls.

Kline explained to Charlie Kirk that Rock The Vote signed an information-sharing contract with PA Democrat Secretary of State Kathy Boockvar and MI Democrat Secretary of State Jocelyn Benson. They gave them full access to their state’s entire voter rolls. According to Phil Kline, their contracts gave them the ability to freely enter data into the poll books. Kline explained that he isn’t saying they added voters, but they are getting access to information showing that voters who don’t exist voted in our elections.

Mr. Kline explained how the Center for Election Innovation and Research helped them to cover it up, explaining that Facebook’s Mark Zuckerberg gave them $50 million. He asked Kirk, “Do you know what they do?” Kline told Kirk the Zuckerberg funded group does “the software on the poll books.”

Kline told Kirk, “This was an orchestrated and concerted effort to dramatically and improperly influence this election for a specific result that was manifested through something we’ve never seen before, and that’s private-public partnerships that shared sensitive data on individual citizens with the private sector so that they would have front door access to manipulate the election.”

Kline continued, explaining the role of Mark Zuckerberg in their efforts, “And that was played out and funded by a billionaire, who not only is engaged now in censorship, and that he believes that we are too stupid to understand the truth, so he has to protect us from ourselves. He’s also now playing a role now in how we choose our leaders. That money was teamed up with other funds from Google and big tech to directly purchase election officials in managing the election, creating a two-tiered election system—one making it easy, almost impossible for Democrats not to vote and one making it more for Republicans areas to vote.” Kline explained that those things combined violate the Equal Protection Clause of our constitution.

Karamo posted her live video on our 100 Percent Fed Up Facebook page. Karamo told us that Dr. Linda Lee Tarver and Angelic Johnson are plaintiffs in a case that Amistad has filed on their behalf against MI Secretary of State Jocelyn Benson for giving out the private information of MI residents.

According to Karamo, the private information of Michigan residents, including social security numbers, birth dates, addresses, and even eye color have been given to Rock The Vote.

Here is a copy of the petition to the House and Senate of the MI legislature: 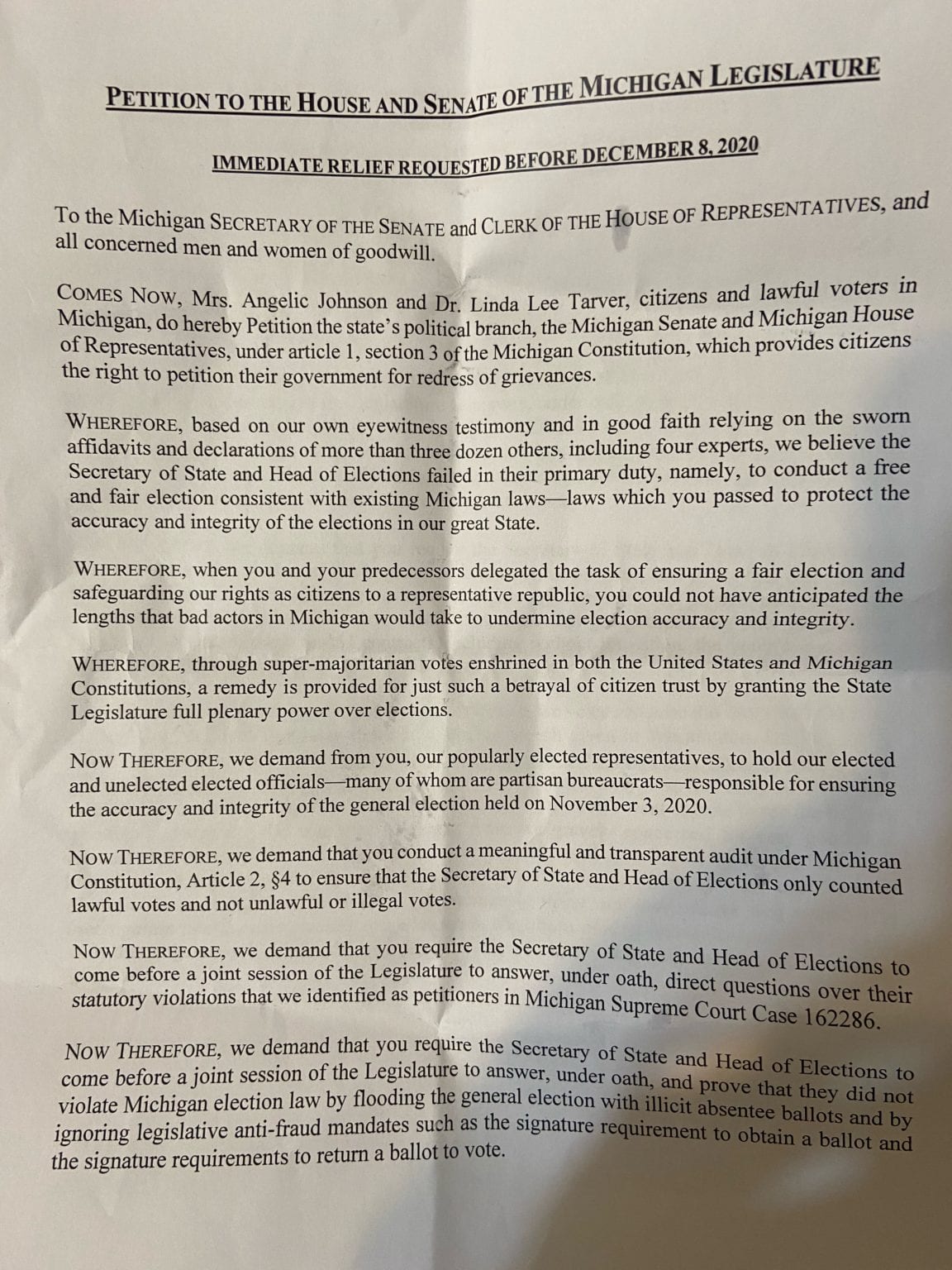 While Rock the Vote claims that it is a “trusted and effective nonpartisan” organization, it has largely supported a left-progressive agenda.

After Hillary Clinton lost the Presidential election in 2016, Rock the Vote’s President, Carolyn DeWitt, issued a statement claiming that the U.S. is “moving steadily in a progressive direction.” DeWitt went on to blame the election results on “archaic and confusing election laws,” voter suppression, and “politics overall.”  In 2019, Rock the Vote circulated a petition in support of abolishing the Electoral College in favor of a popular vote system.

In 2009, Rock the Vote launched a multimedia campaign focused on supporting the Obama administration’s efforts to enact government-run health care, including a 30-second television ad with celebrities encouraging young people to “demand health care now.” The ad intended to educate young voters about health care reform. In conjunction with this ad, the campaign encouraged people to demanding health care reform by signing a “Yes We Care.”

A closer look at the “NON-PARTISAN” organization, Rock The Vote, including their senior staff and members of their Board of Directors, makes it pretty  Who did MI Secretary of State Jocelyn Benson give the social security numbers, addresses, and other personal information of all registered Michigan voters in her efforts to affect the outcome of Michigan’s elections?

Carolyn DeWitt is the President and Executive Director of Rock the Vote. DeWitt formerly served as the chief of staff for Pivot, a political consulting firm, and as a project manager at the 2012 Democratic National Convention.

Jasmine Jones is Rock the Vote’s Organizing Director. She is a political operative and former director of alumni support for the Virginia Progressive Leadership Project.

Rasheed Varner is Rock the Vote’s Data and Research Associate. Varner formerly worked for the Office for Democratic Institutions and Human Rights, the Center for Technology and Civic Life, and the Women Donors Network (WDN)

Stephanie Shaw is the Director of Corporate Partnerships and oversees Rock the Vote’s Democracy Day Initiative. Shaw formerly worked as the corporate affairs manager at People for the Ethical Treatment of Animals (PETA) and has worked with Freedom for Immigrants, the New Leaders Council, and the ACLU.

Co-Chair Amanda Brown Lierman is the managing director of Supermajority. Lierman is the former political and organizing director of the Democratic National Committee, the former Campaign Director of For Our Future (a left-of-center advocacy group that focuses on a variety of issues), and the For Our Future Action Fund, and the former Executive Director of the National Women’s Business Council. Lierman worked as an organizer for Barack Obama’s presidential campaign in 2007, before working for the Obama transition team.

Chris Melody Fields Figueredo is the treasurer of the board. Figueredo is the executive director of the Ballot Initiative Strategy Center Foundation (the Ballot Initiative Strategy Center Foundation provides research and other support to left-of-center groups seeking to use state-level ballot referenda to change laws and constitutions), former associate director of voting rights at ReThink Media,(ReThink Media, founded in 2008, is a combination public relations firm, advocacy organization, and pass-through funding entity for left-of-center organizations), former manager of legal mobilization and strategic campaigns at the Lawyers’ Committee for Civil Rights Under Law, and a former outreach director for Common Cause(Common Cause is a 501(c)(4) progressive advocacy group focusing on campaign finance law, so-called “fair redistricting,” and general liberal policy). Figueredo was formerly a campaign organizer and worked as the Iowa deputy political director for John Edwards’s 2008 presidential campaign, after serving as a field organizer for his 2004 presidential campaign.

Frank Smith is co-chair of the board. Smith is a senior political advisor for Democracy Alliance, The group was not created to “dole out money itself,” rather it was meant to operate more as an “exclusive collective” of “partners,” billionaires and millionaires (and later, organizations) committed to providing at least $200,000 per year to left-of-center organizations. Billionaire financier George Soros and late Progressive Insurance chairman Peter Lewis are the most notable Democracy Alliance donors, but the list of Democracy Alliance partners includes many “of the biggest names in liberal politics.”

Jeff Ayeroff co-founded Rock the Vote in 1990 as a response to the Parental Advisory labels (PAL) affixed to albums that featured explicit language. Ayeroff served as the Senior VP of Marketing and Creative Services at A&M Records, after serving as the Senior VP of Warner Records.

Jesse Moore is the founder and principal consultant at Common Thread Strategies. Moore is a former Associate Director of Public Engagement and speechwriter at the White House after serving in management positions on President Obama’s 2008 and 2012 campaigns.  Moore is the former vice president for civic engagement at Rock the Vote.

Lara Bergthold serves as secretary of the board and serves as chairperson of the boards of both Campaign for America’s Future (The organization bills itself as “the strategy center for the progressive movement.” The organization signed a petition supporting the Green New Deal).  and People for the American Way (a left-of-center advocacy group formed in 1981 by liberal Hollywood television producer Norman Lear, ostensibly to oppose the conservative principles espoused by Christian conservative televangelists). She also served as National Deputy Political Director for former Secretary of State John Kerry’s 2004 presidential campaign.

Michael Skolnik is a left-wing activist and co-founder of the media campaign firm Soze Agency (The Soze Agency is a left-of-center strategy firm that specializes in social media, awareness campaigns, and strategic communications that cater to left-of-center clients). Skolnik is a board member for a number of left-wing Black Lives Matter organizations, including the Trayvon Martin Foundation, PolicyLink, the Gathering for Justice (affiliated with the Women’s March), and Drug Policy Alliance.