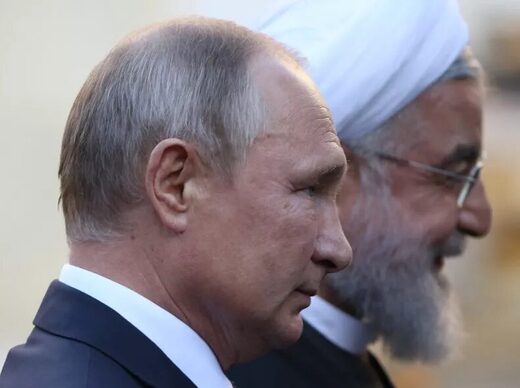 In a noteworthy interview with an Israeli newspaper on Tuesday, Russia has accused Israel of being responsible for the unrest in the Middle East, while relieving Iran and its allies of blame.

“The problem in the region is not Iranian activities,” Russian ambassador to Israel Anatoly Viktorov told the Jerusalem Post in comments later shared by Moscow’s embassy in Tel Aviv. “It’s a lack of understanding between countries and noncompliance with U.N. resolutions in the Israel-Arab and Israel-Palestinian conflict.”

Israelis have steadily annexed and settled across territories deemed Palestinian by the United Nations. Violence between the two sides has stymied peace efforts for decades, though frictions between Israel and Iran, along with fellow pro-Palestinian partners such as Lebanese Shiite Muslim movement Hezbollah, have taken precedence.

But Viktorov dismissed Israeli concerns of Hezbollah plots such as infiltrations and rocket attacks, pointing instead to regular Israeli operations against the group and other suspected Iranian assets in countries like neighboring Syria.

“Israel is attacking Hezbollah, Hezbollah is not attacking Israel,” Viktorov said, arguing there is “no proof Hezbollah created the tunnels” Israel has uncovered along its contested northern border with Lebanon.

Newsweek recently spoke to both Israeli and Hezbollah officials who said they were ready for another possible conflict between them as tensions ran high. In response to Israeli strikes on Syria, Damascus’ mission to the U.N. expressed toNewsweeklast month that countries, especially permanent members of the U.N. Security Council, should stand against such aggressions.

He said Israel must “not attack the territories of sovereign U.N. members.” He acknowledged that Israel gave Russia prior notice before such strikes because “coordination is about the safety of the Russian military in Syria,” but emphasized that “there is no way that we are approving any Israeli strikes on Syria, never in the past and never in the future.”

The dynamics between Russia, Iran and Israel have proven complex in Syria. Moscow and Tehran coordinate closely in their joint efforts to back Damascus in a near-decade-long war against an insurgency and militant groups like the Islamic State (ISIS), but their interests do not always align.

Still, Russia has largely blamed foreign powers acting in Syria without the government’s position for disrupting work to achieve peace in the war-torn nation. On Friday, Russian Foreign Minister Sergey Lavrov touted Moscow’s efforts to “break the back” of terrorism in Syria since the 2015 military intervention there, and criticized the ongoing U.S. presence in the country.

“The tasks of providing decent life conditions for millions of Syrians, who have survived that devastating war, are coming to the fore. It requires the participation of the entire world community,” Lavrov told the Rome 2020 Mediterranean Dialogues. “We have to state with regret that in response to constructive shifts in political settlement, Damascus receives illegal presence of U.S. forces on its territory, which is overtly used for encouraging separatism and for hindering the restoration of the country’s unity.”

The Russian top diplomat spoke out specifically against intensive U.S. sanctions levied against the Syrian government during the COVID-19 pandemic, which has wreaked further havoc on a collapsing Syrian economy.

“The West demonstrates double standards denying help to Syria, even when humanitarian issues are raised,” Lavrov said. “Amid the pandemic, the West sticks to its policy of economic strangling of Syria.”

While Washington does not oppose Moscow’s presence in Syria, it does seek the withdrawal of forces associated with Tehran, as the State Department has communicated to Newsweek. 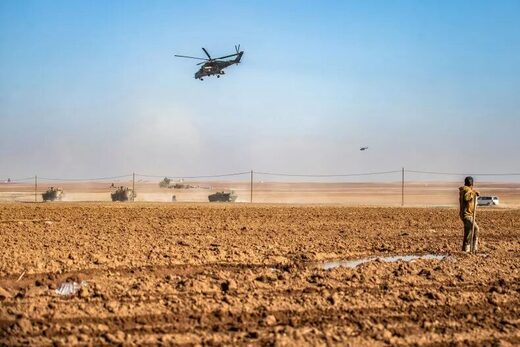 © DELIL SOULEIMAN/AFP/Getty Images
A farmer looks on while a Russian military Mil Mi-24 “Hind” helicopter gunship flies above and military vehicles pass along a nearby road, during a joint Russian-Turkish patrol in the eastern countryside of the town of Al-Darbasiyah near the border with Turkey in Syria’s northeastern Al-Hasakah province on December 7. Russia backs the Syrian government, while Turkey backs the opposition but both countries have sought to work together in an effort to resolve the nearly decade-long conflict.

Opposition from President Donald Trump‘s administration toward Iran’s footprint in the Middle East was among the cited reasons for the White House’s unilateral departure two and a half years ago from a 2015 nuclear deal signed by the two countries, along with China, France, Germany, Russia and the United Kingdom.

The deal granted Iran international sanctions relief in exchange for agreeing to substantially curb a nuclear program officials have always denied was intended to produce a bomb. But skepticism, especially from the U.S., Israel and Sunni Muslim monarchies like Saudi Arabia, has continued to surround the intentions of the rival revolutionary Shiite Islamic Republic.

With only weeks left for the Trump administration, fear of a potential conflict erupting remain real across the region. Such anxieties have been especially pronounced since the assassination late last month of Iranian nuclear scientist Mohsen Fakhrizadeh.

No country or group has claimed the slaying, but Iranian authorities have blamed Israel, along with an outlawed dissident group operating overseas.

The U.S. has remained quiet on the attack, but Russia has strongly condemned it as “a terrorist act clearly aimed to destabilize the situation and escalate conflict potential in the region.”

In the wake of the killing, which comes a decade after a series of similar assassinations of individuals associated with Iran’s nuclear program, both Iranian and Israeli officials have vowed to Newsweek they would remain vigilant in the face of threats and were capable of defending their countries.