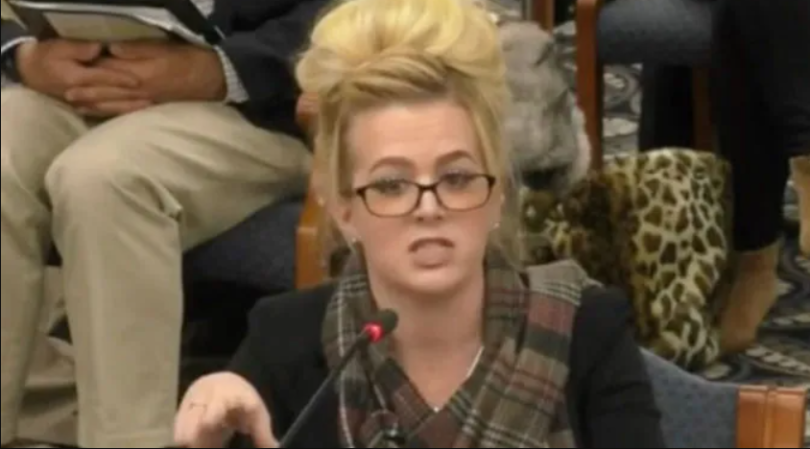 A Dominion contract worker left Democrats stunned during explosive testimony at a hearing before the Michigan Senate Oversight Committee this week.

Melissa Carone, a cybersecurity and IT specialist who was hired by Dominion Voting Systems, testified as a witness during the Committee’s hearing on election integrity on Tuesday.

While working at the tabulating center in Detroit on November 3, the Dominion whistleblower claims to have witnessed workers scanning Biden ballots up to ten times each, and says that the fraudulent activity was widespread during the count.

“What I witnessed at the TCF Center was complete fraud; the whole 27 hours I was there,” she declared.

“There were batches of ballots being run through the tabulating machines numerous times, being counted eight to 10 times,” Carone continued.

“I watched this with my own eyes,” she added.

Wnd.com reports: She said that the election official in charge of counting the mail-in ballots, Daniel Baxter, and at least 90% of the workers were “in on the whole thing.”

She also testified she was aware that ballots were being tabulated at the Department of Elections, where she originally had been scheduled to work.

“There was something going on at that Department of Elections,” she said, “and it’s clearly something that’s very illegal that occurred there. And I’m grateful to God that I did not go there.”

According to election law, ballots must be dropped into a sealed box after being scanned. But Carone said they were accessible to election workers after they ran them through the machine.

Boxes set aside to receive the scanned ballots were moved to another part of the room and used to block poll observers, she said.

She testified a Dominion worker disappeared to a “warehouse” – which she said he called the “Chicago warehouse” – for about three hours before a massive dump of ballots was tabulated for Joe Biden.

Carone said the workers at the Detroit center were “very secretive” and “pushy.”

“Never did I ever admit I was a Republican to these people,” she said.

“Everything that happened at that TCF Center was fraud,” she said. “Every single thing. Every avenue was taken to commit it.”

The chairman of the committee, Republican state Sen Ed McBroom, noted Carone said she observed a massive dump of ballots for Biden arriving late and asked her if she knew where they came from.”

“I do not know 100 percent” where they came from, she said. “Do I assume (I know) where the came from? Absolutely.”

Republican state Sen. Michael MacDonald asked Carone if the Justice Department was looking into the matter.

She said she called the FBI on Nov. 5 and spoke with a woman for at least 40 minutes but did not receive a call back. Carone called back herself but said she hasn’t been contacted since by the bureau.

The senator asked if she contacted anyone from the Trump campaign, noting they have a “pipeline” to the Justice Department.

“I’ve been talking to attorneys,” she said. “What I said just now regarding the Department of Elections and how I was scheduled to work there, that is coming out … next week.

“I wasn’t even supposed to talk about that (at the hearing) but a lot of people mentioned it. So I’m going to tell you guys about it, because this is fraud.”

Not everyone agrees with Carone’s testimony. On Nov. 13, Chief Judge Timothy Kenny of Michigan’s Third Judicial Circuit Court previously ruled her claims were unsubstantiated, as he wrote:

Affiant Melissa Carone was contracted by Dominion Voting Services to do IT work at the TCF Center for the November 3, 2020 election. Miss Carone, a Republican, indicated that she “witnessed nothing but fraudulent actions take place” during her time at the TCF center. Offering generalized statement, Ms. Carone described illegal activity that included, untrained counter tabulating machines that would get jammed four to five times per hour, as well as alleged cover up of loss of vast amounts of data. Ms. Carone indicated she reported her observations to the FBI.

Ms. Carone’s description of the events at the TCF Center does not square with any of the other affidavits. There are no other reports of lost data, or tabulating machines that jammed repeatedly every hour during the count. Neither Republican nor Democratic challengers nor city officials substantiate her version of events. The allegations simply are not credible.”

Meanwhile, another witness at the hearing, a poll watcher, told the committee he witnessed the alleged 4:30 a.m. dump of more than 130,000 votes for Biden after Election Day.

He said the ballots were wheeled in on dollies and everyone was “perplexed” that they were coming in so late.

Saying elections in Michigan have been a “hot mess” for decades, she testified that she saw ballot harvesters deliver stacks of 75 ballots at a time to the elections office.

This fine Michigan GOP lady has been involved with elections 25 yrs, last 8 of which with voting integrity. Gutless Democrat weasel State Sen @JeffMIrwin tries to blame everything on @realDonaldTrump & Michigan GOP.
Will bless your heart to watch the back and forth! 1/4 pic.twitter.com/MlJv8dIpS6

A Republican elections observer testified that 100% of the military ballots she saw at the TCF Center looked like copies of each other, and all of them were votes for Joe Biden.

“Not one of the military ballots was a registered voter, and the ballots looked like they were all exactly the same Xerox copies of the ballot – they were all for Biden across the board, there wasn’t a single Trump vote and none of the voters were registered,” she said.

“They had to manually enter the names, addresses, enter birthdate of 1/1/2020 which would override the system and allow them to enter non-registered voters of which I saw several that day, throughout the day, that’s how they would override voters that were neither in the electronic poll book or in the supplemental updated poll book.”

Witness at #MichiganHearing says all military ballots she saw looked like "xerox copies" of each other, none were registered Michigan voters and all were for Biden pic.twitter.com/nU6OMG7M88