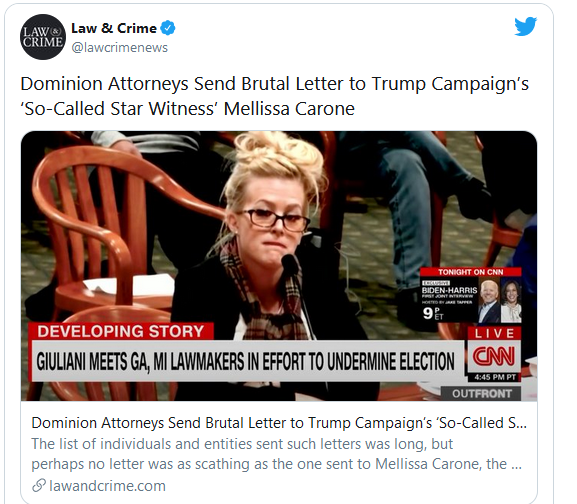 Mellissa Carone is the courageous Dominion whistleblower who came forward to allege major systemic voting fraud at the TCF Center in Detroit on election night 2020. Last week, the CEO of Dominion Voting Services, John Poulos, testified before the Michigan Senate.

Mellissa Carone told The Gateway Pundit that the Dominion CEO lied several times during his testimony.

Because she had the gall to stand up to the elites Mellissa Carone is now under constant attack. The elites do not like it when the workers step out of line.

Now Dominion Voting Systems is threatening Mellissa Carone saying she was only hired to “clean glass” and for “other menial tasks.”

Dominion also claimed Mellissa was a star witness when Rudy Giuliani brought in DOZENS of witnesses to testify.

This is what these awful people think of working Americans!

Dominion Voting Systems attorneys wrote to a number of President Donald Trump’s allies including Sidney Powell and former Dominion contractor Mellissa Carone asking they stop claiming the company had “rigged” the 2020 election, according to Law and Crime.

Dominion attorneys Thomas Clare and Megan Meier sent letters ordering those concerned to stop making “defamatory” statements, including those that claim the company “rigged or improperly influenced” the 2020 presidential election, Law & Crime reported of the letter sent Dec. 22 to Carone. Dominion’s letter to Carone also warned that “litigation regarding these issues is imminent,” according to Law & Crime.

“You gained international infamy earlier this month as Rudy Giuliani’s so-called ‘star witness’ who could supposedly corroborate outlandish accusations that Dominion has somehow rigged or otherwise improperly influenced the outcome of the Nov. 2020 U.S. presidential election,” Clare and Meier reportedly wrote in the letter to Carone. “Without a shred of corroborating evidence, you have claimed that you witnessed several different versions of voter fraud—ranging from one story involving a van, to other accusations that votes were counted multiple times. You published these statements even though you knew all along that your attacks on Dominion have no basis in reality.”