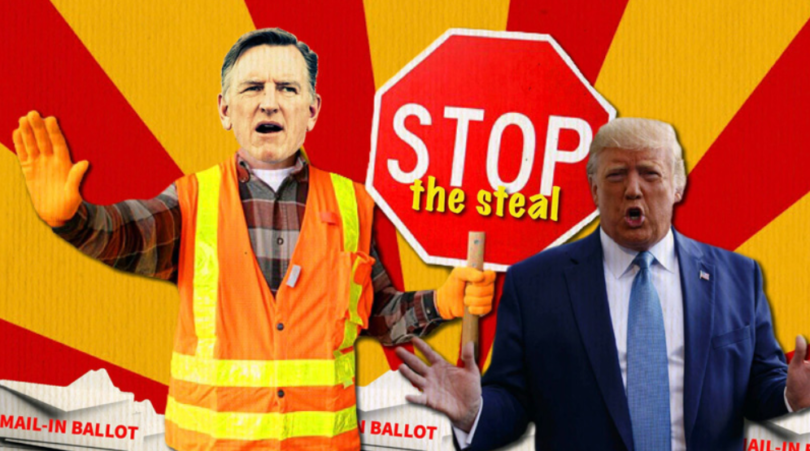 With the election being stolen right before our eyes, the US is witnessing a “Third World coup d’etat,” says Congressman Paul Gosar.

On Monday, Rep. Gosar (R-Ariz.) laid out why he believes Democrats orchestrated voter fraud in Arizona, a state which President Trump by all accounts was poised to win.

“In 2016, then candidate Donald Trump fell victim to a heinous crime that had never before been committed in the history of our country,” writes Gosar, referring to the phony FBI collusion hoax.

“At the conclusion of the Russia investigation, they cherry picked a phone call the President had with Ukraine to pursue a farcical impeachment,” Gosar recalled, adding, “They failed.”

Now Democrats, in the throes of desperation, are pulling out all the stops to simply take the election by force, the Arizona 1st District rep says.

“Having failed everywhere else, they brazenly engaged in systemic voter fraud and are trying to steal this election. They did it right in front of us with no shame.”

The congressman went on to lay out the election night debacle and suspicious leftist predictions of a “red mirage,” which they claimed would show Trump winning on Election Night – before mail-in ballots were counted.

“On election night as votes poured in overwhelmingly for President Trump, Joe Biden told supporters to ‘Keep the Faith’ and ‘We believe we are on track to win this.’ The next morning, we all awoke to see massive, statistically impossible spikes in votes for Joe Biden and almost zero for President Trump.”

“Are we witnessing a coup d’etat?” Gosar asks.

The congressman from Arizona goes on to point out the testimony of Dr. Shiva Ayyadurai, who demonstrated how a “glitch” switched votes from Trump to Biden, and recent reports that found 3% of ballots in Maricopa County were fraudulent.

“We can never accept the results of fraud,” declares Gosar, adding President Trump “will not concede to a Third World coup d’etat.”

“Our right to vote includes the right to a fair vote count. I will fight to restore the rightful victor, President Trump. Our Constitution, our Republic and our nation demand election integrity. We are not giving up. The President has not conceded and will not concede to a Third World coup d’etat. We have a constitutional republic, not a banana republic.”

On Sunday, Rep. Gosar joined by US Rep. Andy Biggs called on the court to embark on a fact-finding investigation “to prove that the vote was indeed fair and accurate.”

Attached is a letter @RepAndyBiggsAZ and I submitted on behalf of @conservatyler @AZGOP lawsuit to get a court ordered audit. #StopTheSteaI2020 pic.twitter.com/hRYYyON4MU

Rep. Gosar is also continuing to request documents regarding Dominion and Smartmatic business dealings in Arizona.

I am requesting documents pertaining to Dominion, Smartmatic, all bids, contracts and information related to them from the Arizona Secretary of State per public records laws. pic.twitter.com/U7BS4iBHYi