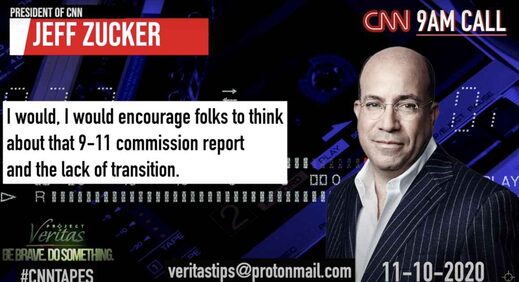 Project Veritas has released the first of its recordings from inside CNN’s editorial calls, beginning with what appears to be network President alongside reporters discussing how another 9/11 attack could happen if Trump didn’t pre-emptively concede to Joe Biden.

The call begins with reporter Jamie Gangel, who describes what left-wing politicians are demanding she report about the matter of Trump leaving office. She appears to be all too happy to take her line from Democrats and anti-Trump Republicans.

But the most shocking part of the call sees field producer Stephanie Becker demanding the network discuss how another 9/11 terror attack could occur if Trump doesn’t aid the Biden transition.

Becker claims: “On the issue of why it’s important to get the transition going right, the 9/11 [Commission] Report talks about one of the problems was that the trouble that was brewing that lost during the transition.

“So if you want a good concrete example of what happens when you don’t have a good transition, well, look at the Twin Towers.”

Presidential transitions are actually a relatively recent thing in American political history. Transitions of the type the country has witnessed in recent years are a product of the last decade, with more basic versions occurring only as far back as the 1960s.

The company’s President, Jeff Zucker, says back to Becker on the call: “I would encourage folks to think about that 9/11 Commission Report and the lack of a transition.”

Read more about James O’Keefe’s morning revelation about CNN, as well as the subsequent legal threats from the network.