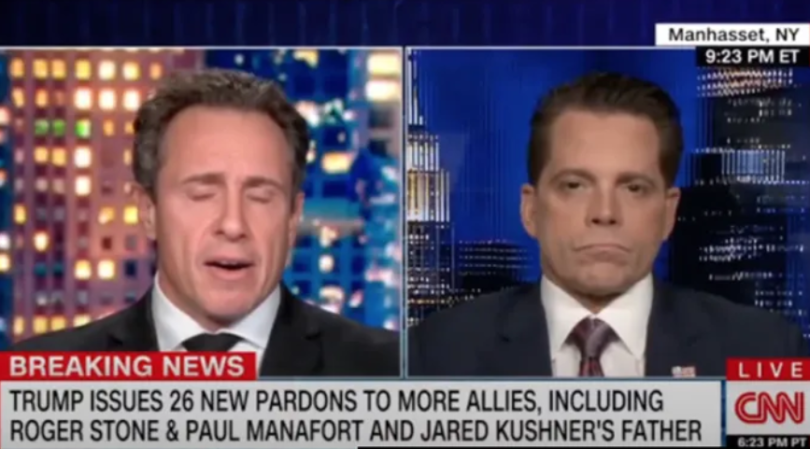 CNN’s chief Democratic propagandist, Chris Cuomo, told viewers on Wednesday that the US Constitution must be amended to ensure Donald Trump (and anybody else like him) can never become President ever again.

During a segment with guest Anthony Scaramucci, the pair shit-chatted their way through a Trump-bashing interview.

“We’re gonna need something to check his power or to check a president like him, god forbid we get another disaster like this,” Scaramucci declared.

“Sometimes you need people like you and me to get in there and tell the truth and rough people up like this,” Scaramucci boasted, labelling Trump a “disaster” for America.

Cuomo then suggested that Joe Biden should point at Trump and publicly humiliate him throughout the inauguration In January.

“If he goes to the inauguration, Biden should point at him and speak to Republicans and say, ‘You deserved better than this,’” Cuomo fantasized.

“He has left your party in shambles,” he continued, adding “I know the GOP. I know Republicans. I know what they’re about at their best, and I will be there for you restoring those virtues. I would point at his ass the whole time.”

“I don’t think Biden will do that because he’s better than I am,” Cuomo went on, claiming “He’s going to try to move past that and the best way to do that is to ignore Trump.”

Summit.news reports: Scaramucci claimed that Trump is “making a decision to go to the inaugural or not,” claiming he still has sources close to the President.

“I predict he goes, Chris. I don’t see how he misses that. He’s an attention hog. He will try to make it about himself. And so my guess is he’ll end up at the inaugural and he’ll leave a lot of wreckage,” Scaramucci claimed.

Referring to Trump’s decision to issue pardons to Roger Stone, Charles Kushner, and Paul Manafort, Cuomo declared that “He has proven himself in just the last 24 hours to be the worst.”

Cuomo ranted for over ten minutes elsewhere during the broadcast about Trump being the worst President ever.