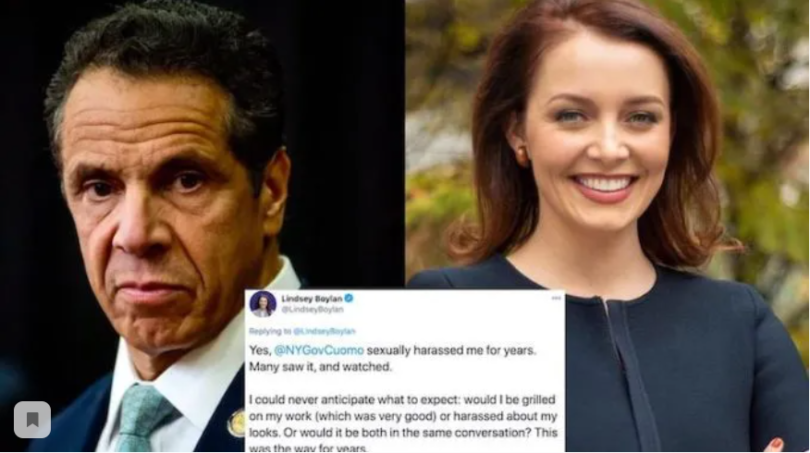 Former adviser to Gov. Andrew Cuomo, Lindsey Boylan, revealed on Sunday that she was repeatedly sexually harassed by Cuomo for years as Democratic colleagues watched and did nothing to stop the abuse.

Boylan, who worked for the Cuomo administration from March 2015 to October 2018, issued a series of bombshell tweets on Sunday morning, revealing how Gov. Andrew Cuomo abused his position to sexually harass, bully and intimidate her on a regular basis.

“My first experience of workplace sexual harassment was when my mom got her first real office job after graduating from college when I was in high school. She was so excited to be taken “seriously.” Her bossed isolated her and kissed her. She never had that type of job again,” Boylan began.

“It was then how I learned how hard it is for women. How hard this world can be for us when we are trying to be taken seriously and help our community. How easily jerks can destroy the lives of women.”

“And I promised myself I would never let those kind of guys win. I would work hard my whole life to put myself in positions of power to change things. To end the violence & corruption. Give voice to the voiceless. I am not stopping. I refuse. I will never give up,” she continued.

She then added the following bombshell statement:

“Yes, @NYGovCuomo sexually harassed me for years. Many saw it, and watched. I could never anticipate what to expect: would I be grilled on my work (which was very good) or harassed about my looks. Or would it be both in the same conversation? This was the way for years.”

Yes, @NYGovCuomo sexually harassed me for years. Many saw it, and watched.

I could never anticipate what to expect: would I be grilled on my work (which was very good) or harassed about my looks. Or would it be both in the same conversation? This was the way for years.

Boylan claims that despite the ongoing sexual harassment from Cuomo, nobody who worked for his administration did anything to stop it.

Not knowing what to expect what’s the most upsetting part aside from knowing that no one would do a damn thing even when they saw it.

And I *know* I am not the only woman.

Boylan’s revelations come just one week after she revealed that the governor’s office was the “most toxic team environment” she’d ever experienced.

Boylan charged that she wasn’t the only one who had allegedly been afflicted by the governor.

“Seriously, the messages and texts I receive when I speak the truth about this…it’s a whole book of people who have been harmed,” she tweeted.

“Don’t be surprised that it’s the same small group of white people sitting alongside him at every presser. The same group that he has had by him the whole time, doing his dirty work. If you’re not one of those handful, your life working for him is endlessly dispiriting,” Boylan wrote.

Boylan suggested that she’s still in therapy for her experiences working for Cuomo’s office.

“I tried to quit three times before it stuck. I’ve worked hard my whole life. Hustled – fake it till you make it style,” she said. “That environment is beyond toxic. I’m still unwrapping it years later in therapy!”

Boylan continued, “And I’m a privileged person. I could opt out and eventually did. I shudder to think what happens to others. It pisses me off so much.”

“Yes I did not sign whatever they told me to sign when I left. Nope!” she said.

Boylan doubled down on her claims Monday.

“I stand by what I said, and what I said speaks to not only my story, but countless others, predominately women I’ve interacted with or heard from over the years,” she told The Post.

Boylan is among Democrats running for Manhattan borough president in the upcoming 2021 election.

This year, she tried to unseat Rep. Jerrold Nadler, chairman of the House Judiciary Committee, in the Democratic primary but was defeated.

Cuomo’s office did not immediately respond to a request for comment by The Post on Monday regarding Boylan’s remarks.