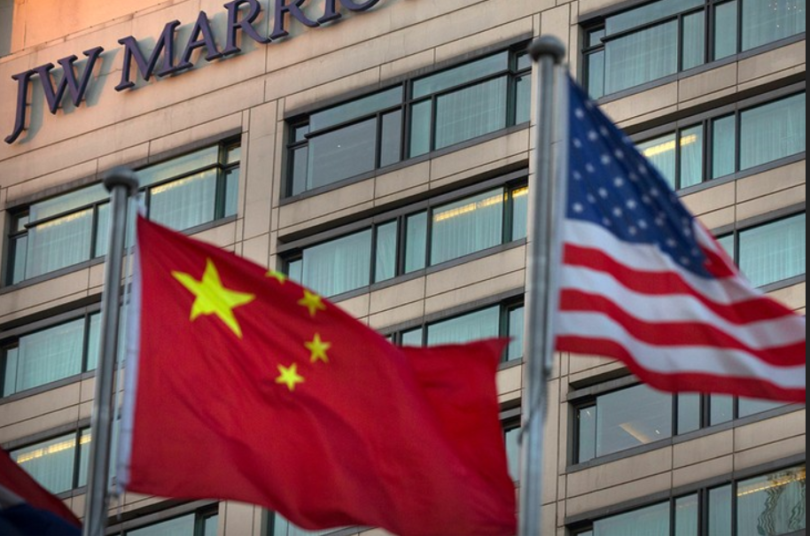 The disclosures regarding US politicians, including a member of the House Permanent Select Committee on Intelligence — Eric Swalwell — as chronicled here by my colleague Bonchie, having been compromised by a Chinese “Honey Trap” only REINFORCE the FACT that the Chinese Communist Party and the People’s Liberation Army are a malevolent force in the world, and Western cultural and moral norms are irrelevant to the tactics they are willing to employ to advance the interests of the Party and the Military.

“Red Sparrow” has historically been a reference to Russian/Soviet intelligence agencies’ use of female intelligence operatives to lure western officials and diplomats into compromising sexual relationships in order to have leverage over them for blackmail purposes. Western intelligence services in the past had identified a “school” where such operatives underwent training before being deployed into foreign countries under a variety of “cover” identities.

The Chinese operate in a different manner. The “Honey Trap” device is used to place Chinese Intelligence assets in positions where they might be able to gather important information over a long period of time. Generally, it is not used for leverage or to extort the targeted individual. It is used to develop a trusting relationship that can be exploited on a continuing and ongoing basis for as long as it can be maintained. Having an “intern” in a Congressman’s office means access to computer systems and all physical spaces inside the office, both in Washington DC and back in the Congressman’s district. That is the “payoff” from the trusting relationship when it develops.

Every Chinese national citizen residing in the United States on some kind of visa is a Chinese government intelligence asset — EVERY SINGLE ONE.

Back in May, former National Security Advisor H.R. McMaster penned a very provocative article in The Atlantic entitled “How China Sees the World — and How We Should See China“. It is a fascinating article I highly recommend to all, and the totality of McMasters’ views reflected in the article are beyond my ability to document here. But relative to this particular issue — the status of Chinese citizens residing in the United States — he wrote:

In 2014 and then again in 2017, the [Chinese Communist] party declared that all Chinese companies must collaborate in gathering intelligence. “Any organization or citizen,” reads Article 7 of China’s National Intelligence Law, “shall support, assist with, and collaborate with the state intelligence work in accordance with the law, and keep the secrets of the national intelligence work known to the public.” Chinese companies work alongside universities and research arms of the People’s Liberation Army…. In addition to espionage and cybertheft by the Ministry of State Security, the party tasks some Chinese students and scholars in the U.S. and at other foreign universities and research labs with extracting technology.

This is Chinese law — “Any … citizen shall support, assist with, and collaborate with the state intelligence work in accordance with the law.”

Chinese “students,” “academics,” and others living in the United States must regularly visit Chinese consulates to be interviewed by consulate officials as part of being given permission to remain in the United States. They are expected to gather intelligence and report what they have learned during the interviews. The leverage over them is that they all have family still in China.

Last week, Secretary Pompeo made an announcement that was largely overlooked with all the election “happenings” — canceling five Chinese “cultural exchange” programs under Section 108A of the Mutual Educational and Cultural Exchange Act (MECEA) that allow U.S. government employees to travel using foreign government funds. All five programs were funded by money from the Chinese Communist Party. The programs were canceled because the State Department determined that the US government employees traveling to China as part of the program were exposed only to Chinese Communist Party and Government officials, not the Chinese people, and the only purpose of the exchanges was to promote CCP propaganda to US officials.

“Confuscious Institutes” are Chinese funded organizations on the campuses of US universities also set up as part of a “cultural exchange” for the purpose of giving US college instructors and students greater awareness of China by teaching Chinese languages, history, and culture. Chinese scholars visit the Institutes and the Institutes fund travel by US academics and students to China. But as this Politico article showed two years ago, the Institutes are really nothing more than “Trojan Horses” through which Chinese spies gained entry into the country and a role at United States research universities in order to conduct espionage.

A 2011 speech by a standing member of the Politburo in Beijing laid out the case: “The Confucius Institute is an appealing brand for expanding our culture abroad,” Li Changchun said. “It has made an important contribution toward improving our soft power. The ‘Confucius’ brand has a natural attractiveness. Using the excuse of teaching Chinese language, everything looks reasonable and logical.”

“Soft power” and “excuse of teaching” don’t seem to suggest an interest on the part of the Chinese government in helping US academics and students distinguish between Mandarin and Cantonese languages, or to distinguish artifacts of the Ming Dynasty from those of the Yuan Dynasty, or to understand what to expect when they order Szechuan Chicken rather than Hunan Chicken at Panda Express.

But let’s return to the travails of Eric Swalwell and other Democrat politicians in Northern California.

A basic primer for US government officials and businessmen — take a look in the mirror.  If what stares back at you is not a version of Brad Pitt that would set afire the heart of a 22-year-old recently graduated college female who just happens to be a Chinese national in the US on a student visa, when you find yourself rolling around a hotel room naked with that same young woman, you should not chalk it up to the fact that you are a “smooth operator” with your come-on lines.

Many years ago, I had the occasion to discuss this very subject with an attractive US intelligence agency representative who happened to be a close acquaintance of an AUSA I knew. At the time, I did not work in a location that had a significant military installation or city with high-level banking or business headquarters of companies like defense contractors, so I never had much exposure to “intelligence” matters. This intelligence agency representative was in the process of transferring away from such an area and told the story of a federal agent who had been “befriended” on a flight to Hong Kong by an Asian female flight attendant. They got together while he was in Hong Kong on business, and a relationship developed. He was not doing “intelligence” work at the time — he was doing counter-terrorism work. He was in his early 50s, divorced, with adult children. Basically, his life was his own. He ends up helping her — not in an illegal way — get a job offer from a US-based airline, and they settle into a relationship with each flying to spend time with the other. He was continually cautioned by supervisors because she was a foreign national, and certain disclosures were required of him. Sure enough, after their relationship ended she quit her US job and returned to living in Hong Kong, It turned out she was tentatively identified later as a Chinese national who had positioned herself to be close to him to see if there was anything she might learn.

The female intelligence agency representative said the US was the only intelligence community in the world that she was aware of where “sex” as a tactic was against “policy.” She shrugged when I asked how well the “policy” is adhered to in her experience — not her specifically but with regard to her knowledge. But she said, “If I was of a mindset to use sex as a tactic, and it was accepted policy, I would never run out of productive work, and I could feed valuable information almost non-stop into intelligence databases.”

That’s why a “hot” Chinese national female wanted to be Eric Swalwell’s squeeze on the side.

The Chinese use sex as a tactic to gain intelligence.  It is not frowned upon.  The paramount consideration is assistance to the Party and the State — by whatever means necessary.

The United States and other western nations superimpose “Judeo Christian” values and morality on foreign cultures — the Chinese in this case — which are neither Judeo nor Christian.  Morality reflected in ethics or monogamy is irrelevant to the concepts of statecraft and espionage to the CCP and Chinese military.

MI5 made this clear to UK businessmen and government officials back in 2010!!!

In a 14-page document distributed last year to hundreds of British banks, businesses, and financial institutions, titled “The Threat from Chinese Espionage,” the famed British security service described a wide-ranging Chinese effort to blackmail Western businesspeople over sexual relationships. The document, as the London Times reported in January, explicitly warns that Chinese intelligence services are trying to cultivate “long-term relationships” and have been known to “exploit vulnerabilities such as sexual relationships … to pressurise individuals to co-operate with them.”

The US has put out the poison bait for itself by being so indiscriminate in how it allows Chinese national citizens to come into the country and then remain. Our “openness” to cultural exchanges, and the vehemence with which any hint of “racism” is denounced when any government policy is premised on where a foreign national comes from, are sowing the seeds for our own destruction.

The party’s leaders believe they have a narrow window of strategic opportunity to strengthen their rule and revise the international order in their favor—before China’s economy sours, before the population grows old, before other countries realize that the party is pursuing national rejuvenation at their expense, and before unanticipated events such as the coronavirus pandemic expose the vulnerabilities the party created in the race to surpass the United States and realize the China dream. The party has no intention of playing by the rules associated with international law, trade, or commerce. China’s overall strategy relies on co-option and coercion at home and abroad, as well as on concealing the nature of China’s true intentions. What makes this strategy potent and dangerous is the integrated nature of the party’s efforts across government, industry, academia, and the military.

They are coming for our place in the world. We need to take the “WELCOME” mat off the porch and store it in the closet for a while.

PS — I didn’t know Swalwell’s backstory, about having been a 1 term City Councilman in Dublin, California, when he decided to run against Pete Stark, a Democrat incumbent who had been in the House for 40 years. Pete Stark was a smart guy who was a force in the Democrat caucus and got things done. The fact that the people of that congressional district voted for Swalwell over Stark in that primary is nothing but a testament to the moronic level of intelligence of those Democrat primary voters.