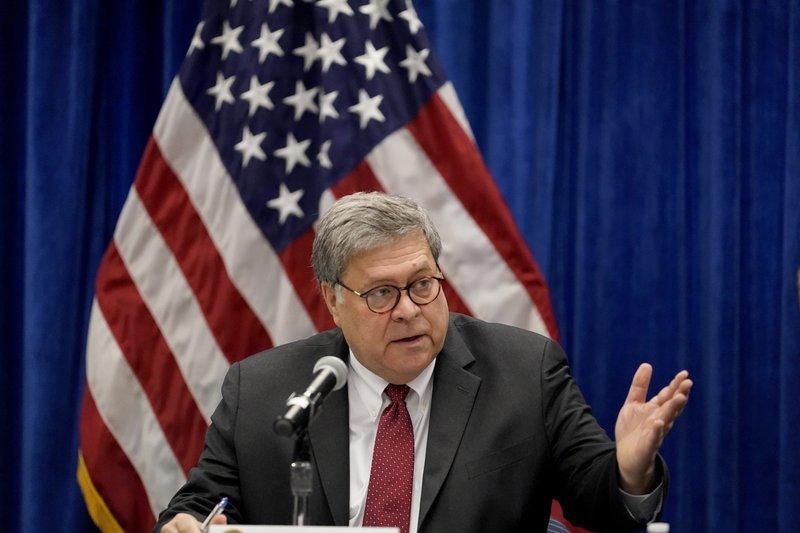 White House Slams AG Barr’s Claims Of No Election Fraud: “There’s Been No Semblance Of A DoJ Investigation”

Update (1500ET): That did not take long. The President’s lawyer Rudy Giuliani has issued a stateent:

“With all due respect to the Attorney General, there hasn’t been any semblance of a Department of Justice investigation. We have gathered ample evidence of illegal voting in at least six states, which they have not examined. We have many witnesses swearing under oath they saw crimes being committed in connection with voter fraud. As far as we know, not a single one has been interviewed by the DOJ. The Justice Department also hasn’t audited any voting machines or used their subpoena powers to determine the truth.

“Nonetheless, we will continue our pursuit of the truth through the judicial system and state legislatures, and continue toward the Constitution’s mandate and ensuring that every legal vote is counted and every illegal vote is not. Again, with the greatest respect to the Attorney General, his opinion appears to be without any knowledge or investigation of the substantial irregularities and evidence of systemic fraud.” 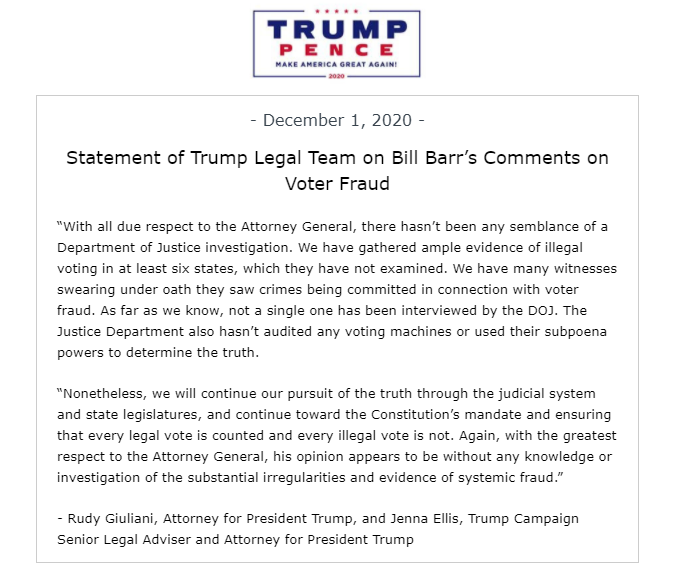 After telling the Associated Press there is no evidence of fraud that would change the outcome of the election, Attorney General Bill Barr just arrived at the White House.

Attorney General William Barr said Tuesday the Justice Department has not uncovered evidence of widespread voter fraud that would change the outcome of the 2020 presidential election.

Last month, Barr issued a directive to U.S. attorneys across the country allowing them to pursue any “substantial allegations” of voting irregularities, if they existed, before the 2020 presidential election was certified.

And today, in an interview with The Associated Press, Barr said U.S. attorneys and FBI agents have been working to follow up specific complaints and information they’ve received…

“Most claims of fraud are very particularized to a particular set of circumstances or actors or conduct. They are not systemic allegations… And those have been run down; they are being run down,” Barr said.

“Some have been broad and potentially cover a few thousand votes. They have been followed up on.”

But, as AP reports, they’ve uncovered no evidence that would change the outcome of the election.

“To date, we have not seen fraud on a scale that could have affected a different outcome in the election,” Barr told the AP.

“There’s been one assertion that would be systemic fraud and that would be the claim that machines were programmed essentially to skew the election results….

And the DHS and DOJ have looked into that, and so far, we haven’t seen anything to substantiate that.“

Though we note from the above sentence that Barr did not deny the evidence, just that he and the DoJ had not found any, making one wonder just how hard they looked?

However, as AP admits (deep in its story), if people still believe there is evidence, they need to seek remedies through a civil case (comfortably distancing himself and the DoJ from any involvement)

“There’s a growing tendency to use the criminal justice system as sort of a default fix-all, and people don’t like something they want the Department of Justice to come in and ‘investigate,’” Barr said.

In the meantime, here are 20 ‘facts’ that don’t pass the smell test that perhaps AG Barr and his crack DoJ election team could probe a little harder…

We will not be holding our breath for President Trump’s response to AG Barr’s ‘findings’, as we suspect it’s coming given what he is watching…

Hope everybody is watching @OANN right now. Other media afraid to show. People are coming forward like never before. Large truck carrying hundreds of thousands of fraudulent (FAKE) ballots to a voting center? TERRIBLE – SAVE AMERICA!