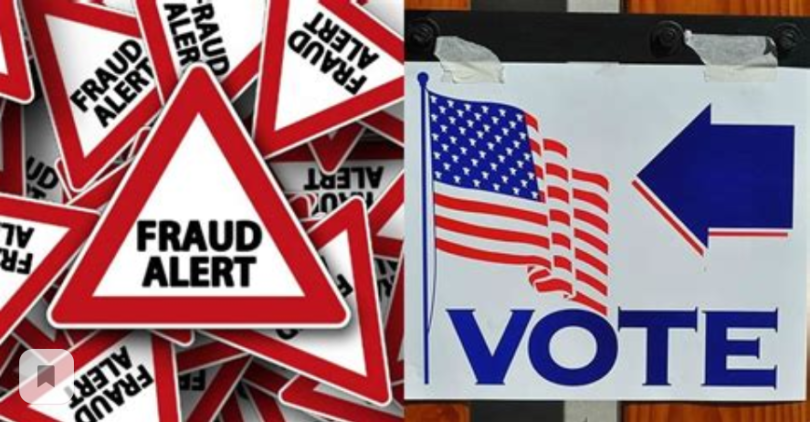 A deep dive into the results in one Michigan County shows a similar pattern as was identified by Dr. Shiva in his Michigan analysis. Dr. Shiva’s numbers can be replicated. Votes were transferred from President Trump to Joe Biden based on consistent rate of transfer.

This is VERY IMPORTANT that this analysis can be replicated by data analysts!

This is not a conspiracy.

This really did happen in the 2020 election.

Votes were stolen from President Trump and given to Joe Biden.

We’ve previously reported on a number of instances where fraud presumably occurred in the 2020 election. We reported on shifts in votes and lost votes across the country that went from President Trump to Joe Biden. This post was retweeted by President Trump:

We knew something big was going on but we couldn’t put our fingers on it until we reported on a pattern in Pennsylvania where President Trump’s votes in mail-in ballots had a consistent pattern by county across the state which was improbable, if not impossible to suggest was random. This and other evidence led us to believe something was causing this relationship to be consistent across the state.

Then we located and reported on a pattern identified in Michigan’s results by Dr. Shiva from Massachusetts, where Trump votes were systematically switched from President Trump to Joe Biden in a consistent manner. This pattern is too consistent to be found in a natural set of numbers and therefore indicates ‘monkey business’ or fraud as well.

According to Dr. Shiva and others, the voting machines used in the US in the current election and in prior elections have the ability to store votes not as integers but as fractions. This allows these machines to weigh votes for candidates and change elections based on this weighting.

There is NO REASON why this feature should be included on a voting machine.

There is only ONE REASON to include this feature on voting machines — to STEAL elections.

Dr. Shiva was on with conservative talk show host Larry Elder and he explained this process in a short interview held during the past week:

After reporting on Dr. Shiva’s analysis, we reported the results of a similar analysis we performed in Milwaukee that was based on Dr. Shiva’s analysis. We analyzed precincts in Milwaukee and found again that votes were transferred from President Trump to Joe Biden in a consistent pattern indicating fraud. Ultimately we found more than 30,000 votes transferred which would be enough to move Wisconsin into the Trump column.

Now we can report our fourth analysis where we re-performed Dr. Shiva’s analysis in Kent County, where roughly 20,000 votes were systematically transferred from President Trump to Joe Biden. 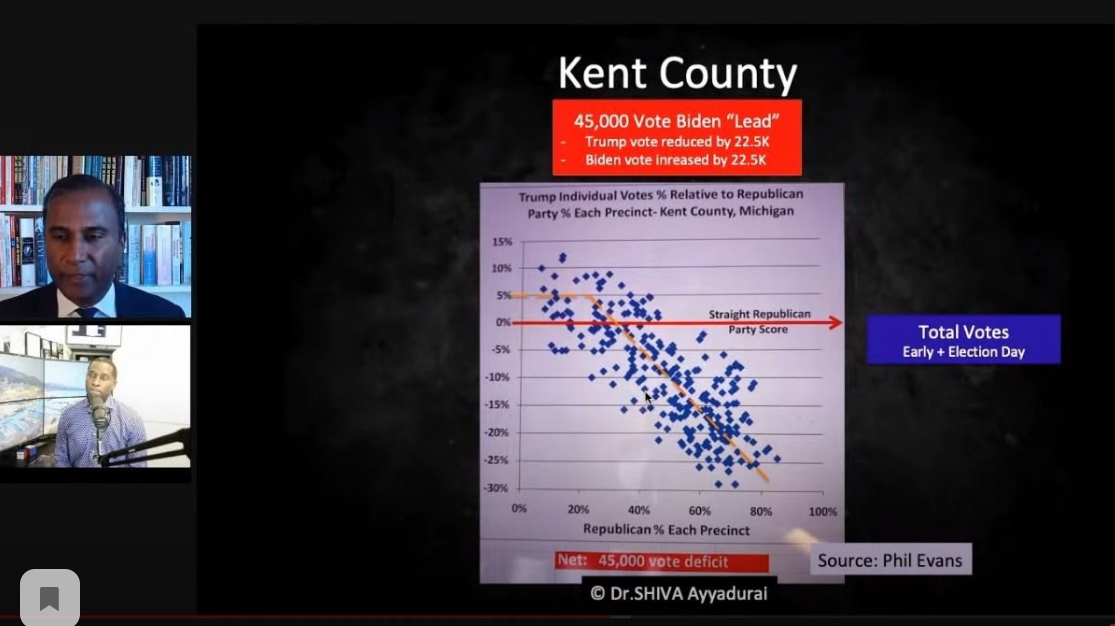 A data scientist who remains anonymous performed a review of the data in precincts in Kent County Michigan. His conclusion is very similar to Dr. Shiva’s in Michigan. The more Republican the makeup of a precinct, the more votes that were taken away from President Trump and ‘switched’ to Joe Biden. Also, ironically these votes move in a fashion which is very disturbing and highly, highly unlikely. The pattern indicates that these precincts were manipulated and votes were removed from President Trump and allocated to Joe Biden.

As Dr. Shiva would say, ‘this is too perfect’. Our analysis of Kent County precincts show a pattern, which is highly, highly unlikely, and similar to what Dr. Shiva observed in Michigan and we observed in Wisconsin: 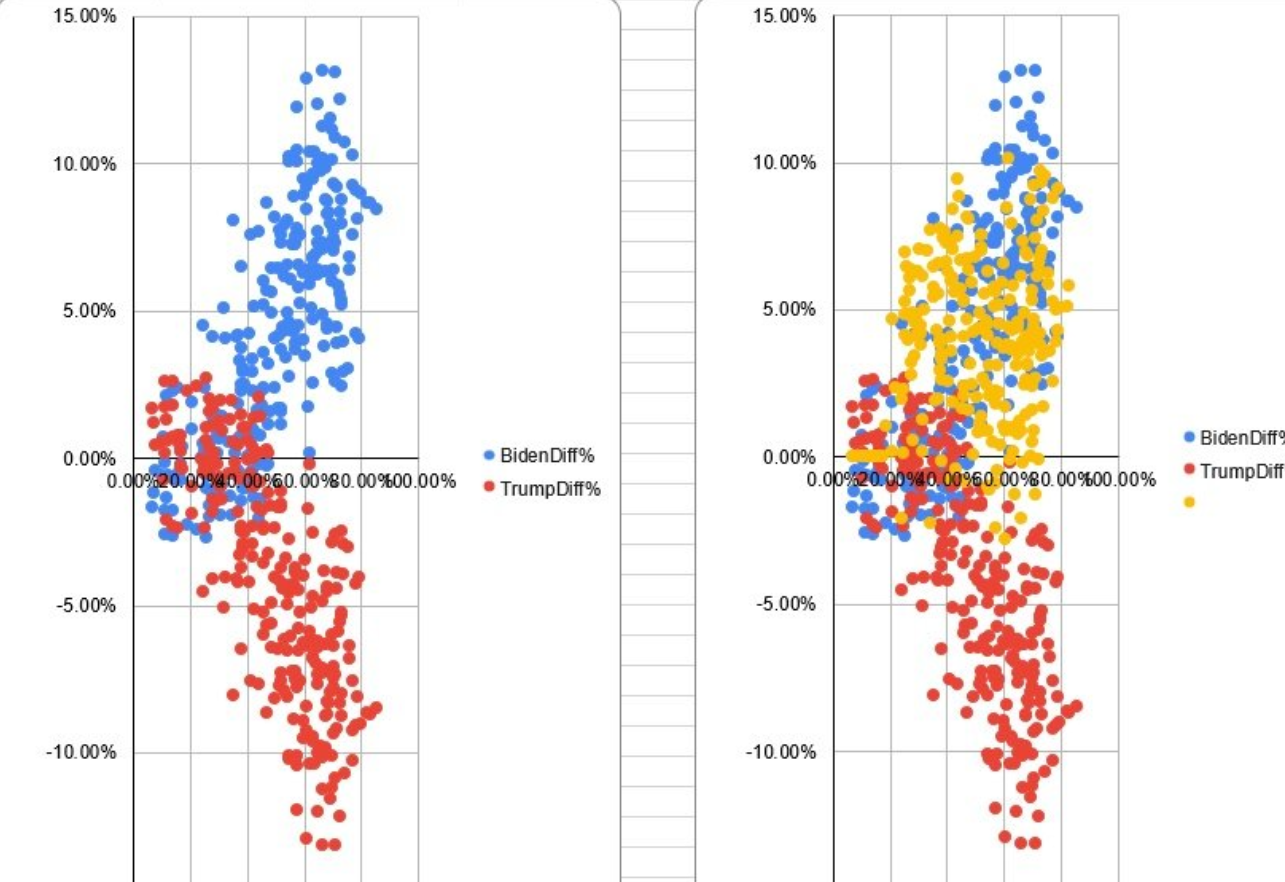 Based on the above analysis for Kent County, the current status of the county’s votes is in the left chart. The votes in the county for Biden are in a pattern that would be expected. The higher a precincts percent of Democrat votes for Congress, the higher the percent votes for Biden for President. However, for President Trump this is not the case. For Trump the higher the votes in the precinct for Republicans in Congress, the lower the percentage of votes for President Trump. This doesn’t make sense and is highly, highly unlikely. The reasonable expectation is the more the Republican votes for Congress, the more the number of Trump votes as well.

In the chart above on the right, the yellow points are where the President should land based on this statistical approach. Note his results would be similar to Biden’s in this county.

In Kent County, when statistically eliminating the current highly unlikely and impossible results (i.e. fraud), the more likely result is 20,900 more votes for President Trump and a corresponding 20,900 less votes for Joe Biden. The total being a 41,800 vote swap and is materially consistent with Dr. Shiva’s analysis.

The more we dig into the data, the more we identify patterns that don’t make any sense at all. The reason the numbers don’t make statistical sense is because there is something going on, and it’s more than likely fraud.

This the greatest election fraud in US history.

And we caught them.