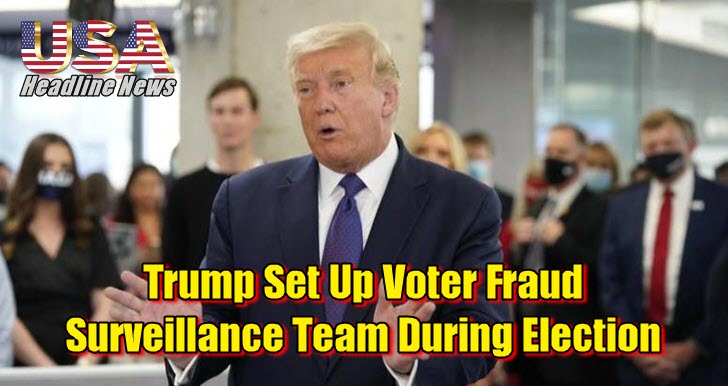 President Donald Trump’s campaign announced on Tuesday it had set up its headquarters for the 2020 election night inside the Eisenhower Executive Office Building (EEOB) within the White House’s compound, steps away from the West Wing. 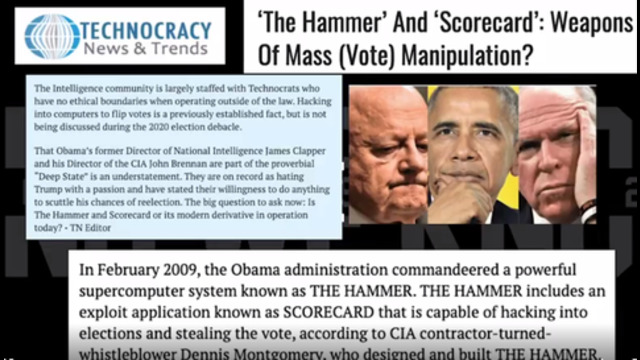 The campaign’s communication director Tim Murtaugh explained the arrangement had been “approved by the White House counsel” to make sure the “war room” was near the president. He added that “every piece of equipment […] was paid for by the campaign” at “no expense whatsoever to American taxpayers.”

They knew which states were using the voting machines loaded with HAMMER & SCORECARD.
(Software developed for the CIA to manipulate voter tallies remotely in foreign elections.)
It was just deployed against the American people.
Tom Fitton & Sydney Powell put it right in your face pic.twitter.com/QTjcfHE5BH

Imagine that the CIA had been using software for years that could undetectably alter vote counts in electronic transit between ballot centers and central vote collection sites. How inevitable is it that sooner or later this same program would be used within the USA? There is karma to this. The US played dirty games in other people’s elections for years, so it any wonder that having created the weapon and trained operatives to use it, that it would eventually come back to bite the US?

Electronic voting is a wild invitation for fraud. It can not be any other way.

Hammer and Scorecard are the names of the two programs designed by the CIA to interfere in foreign elections and now allegedly being used in the USA itself.

The General [Lt. Gen. McInerney] described “Hammer” and “Scorecard,” a pair of programs initially designed for the CIA before being privatized by Deep State players from the Obama administration. We explained how they work in an article last week, but the gist is this: “Hammer” or “THE HAMMER” is a counter-intelligence surveillance program used to spy on activities on protected networks (like voting machines) without detection while “Scorecard” is a vote-manipulation application that changes votes during transfer. It’s the least detectable form of election manipulation because it works during data transfer between voting stations and data storage hubs. Unless both sides are looking for irregularities, it’s impossible to catch. If nefarious forces had people on one side or the other (or both) during data transfer, it cannot be exposed.

Previously, Nov 2: Voting alterations are limited to something like 3% in each move to make it less obvious.

CIA program known as “Scorecard” allows its users to change voting outcomes by hacking into the transfer between local reporting stations and state or national data centers. According to McInerney, it’s a small amount, under 3%, to keep it from triggering any alarms. He would know. He served in top military positions under the Secretary of Defense and the Vice President of the United States.

There is a brief discussion of the Software glitch at 22 mins on. and then more at 29 minutes. (The whole episode is interesting).

At 29 minutes Sidney Powell (Michael Flynn’s Defence Attorney) talks about “Hammer and Scorecard“. The need to investigate the likelihood that 3% of the votes were changed across the country”. “We have some evidence that this can happen.” “We’ve used it against other countries, and now against our own people.” We’ll put it in the federal lawsuit. This is Coup 5.0.”

I think Hammer and Scorecard.

“The President must fight back now.”

Tom Fitton [the president of Judicial Watch] points out that the State Legislatures have the right to install electors that will vote for Trump if the election process has been compromised.

This shows the Hammer and Scorecard program SWITCHING VOTES CAUGHT LIVE ON CNN!!!

Hammer and Scorecard program switches to

Caught on CNN Live:  25% of the difference between Dem to Rep was just washed out.

Perhaps there is a legitimate reason for this. They may be correcting an error, a typo, but it should be investigated and explained. How often have these silent corrections happened? Who is keeping watch?

They have a witness and it’s the man who wrote the program. Dennis Montgomery is a hero…
There may be forensic evidence showing how the votes were changed. If that’s true, Mr Trump will have no problem in court.