So what should the Right do about it?

It’s also more than likely that Trump received at least another 10 million votes which were simply switched to Biden by Dominion software and several other fraudulent means.

We also know that millions of illegal voters participated and that other unlawful votes were likewise cast for Biden. An old and sick, dementia-ridden and drug-addled, corrupt and criminal, rape-accused and pedophile candidate like Joe Biden obviously did not receive the largest number of votes ever received by a POTUS winner. Even more than Obama, they say. Didn’t happen! Couldn’t happen! Would never happen!

But what does it all mean for those who voted for the real winner—Donald Trump?

It means that their vote was effectively disenfranchised.

It means their vote was cancelled out by the illegal vote of an illegal alien or a double voter’s second vote or dead person’s ballot or digital disappearance or switch to Joe Biden.

It means every Donald Trump voter in the nation was ripped off … and ripped off BIG-TIME!

Just take a look at the current vote standing according to the completely untrustworthy Mainstream Media. 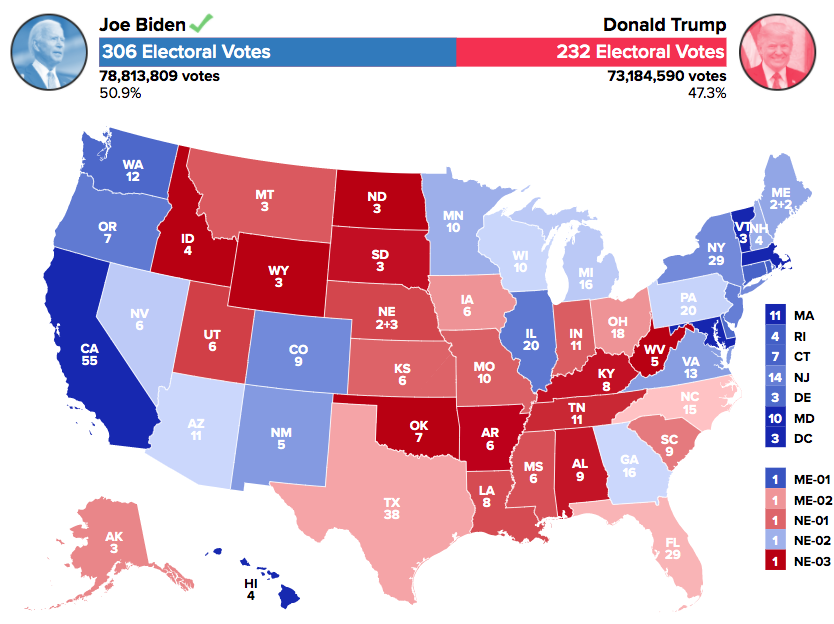 Now take a closer look at the most realistic outcome of the race had there been no cheating or fraud or theft whatsoever. 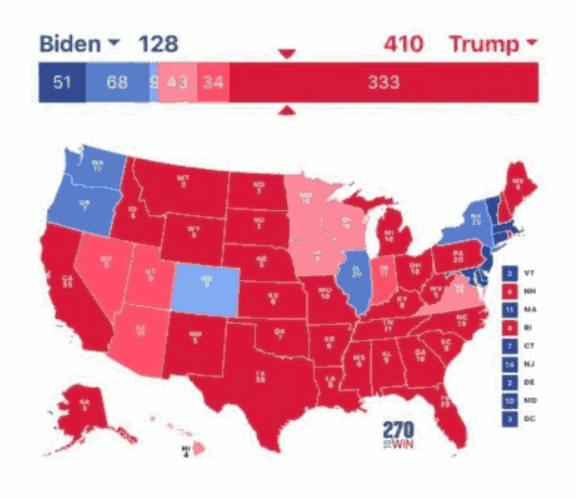 The vast difference in the voting tallies depicted above is just one of the obvious reasons the Democrats were so desperate to steal the election. Their utter humiliation was simply too much to bear. They also knew their “violent race riot” fiasco and “burned-down cities” blunder and “defund the police” debacle lost them millions upon millions of voters.

Let’s face it: The Democrats absolutely had to outright steal the election given
how mortifying the Trump landslide victory really was!

Houston, we have a problem.

Actually, it should read: Washington, DC, we have a problem. Is there anyone on planet Earth who doesn’t know that in 2020?

The stark reality we are now facing is both an inevitable constitutional crisis of epic proportions and a potential civil war of much greater proportions. Because, if the U.S. Supreme Court enables the Democrat’s election theft, Civil War II is inevitable!.

In light of how this entire 2020 election catastrophe was engineered by the power elite, it’s now critical for the American people to unite as never before. For it was the Central Banking Cartel and International Banking Crime Syndicate that set this whole thing up.

The banksters know full well that the real war raging under the radar is between the 1% and the 99%. That’s why they had to use their “divide and rule” strategy so effectively on the American people. If we aren’t fighting each other, they know we will turn our ire on them, and quite justifiably so.

Only by driving so many emotionally charged wedge issues deep into the heart of the body politic have the banksters succeeded at alienating every group in American society from another group. Isn’t that exactly why they launched OPERATION COVID-19 when they did in January of 2020?! Now we even have fearful face-mask wearers hating faithful non-mask folks. Can it possibly get any worse that that?!?!

But back to the central problem at hand.

They stole it. They stole it outright. The stole it brazenly and recklessly. They stole it in broad daylight and during prime time. And they are determined to get away with it and then rub our faces in the ‘Trump loss’ that never happened.

They would have already assassinated Trump, too, if they thought they could get away with it but they know as a martyr Trump would be a much more powerful figure (and force) for the fully armed Patriot Movement.

Trump’s personal reality is that he must win this election and serve a full second term for his own protection and the protection of his family, friends and supporters. He has set back the New World Order agenda so much and cost the globalists so many hundreds of billions of dollars that his only safeguard is to occupy the Oval Office for the next 4 plus years. After all, he won by an unprecedented landslide vote and, therefore, the most important job of his life is to decisively reverse this unparalleled election theft and gross injustice.

But it’s not only his legacy that’s at stake: President Trump must proceed down this grueling and tortuous path to victory for the sake of the country, the ever-loyal Patriot Movement, and the continuity of the American Republic. Upholding the integrity the U.S. election system and electoral process will be the single greatest achievement of his presidency. For the United States of America will cease to exist as both a constitutional republic and representative democracy without a fair and accurate voting system, election process and vote-counting procedure.

When the electorate is systematically disenfranchised by one of the major political parties, it ought to be clear that the communist Democrat Party is determined to foist a totalitarian government on the American people with all the trappings of a Covid-justified tyranny. Joe Biden is their front man and Kamala Harris is their pitchman just waiting to impose the most draconian measures this country has ever experienced via the OPERATION COVID-19 juggernaut.

All of which points to this: 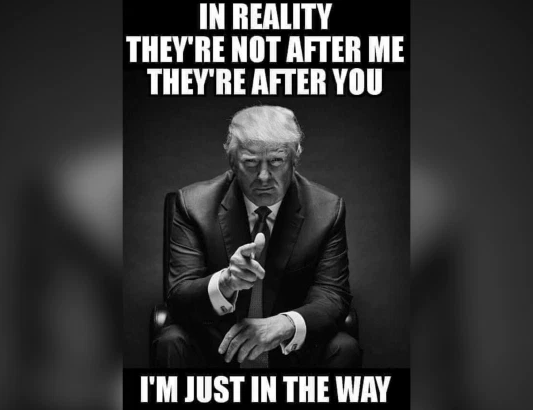 There can be only one response to the ongoing usurpation of the American Republic by way of a transparent POTUS election theft.

The Right must do whatever is necessary to prevent this communist takeover from ever happening. For once the Democrat bolsheviks occupy positions of power, they will concentrate and consolidate it like never before…just as the same bankster-backed Leninists did during the 1917 Bolshevik Revolution. Such a cataclysm would then be used by the radical Left to push the nation into a full-blown civil war so that the USA is completely destroyed from within. Then the foreign globalists, who are the barbarians at the gate, can easily work with the barbarians who are inside the gate.

The Democrat and RINO perps are already carrying out their perfidious agenda(s) via their countless agents of the highly destructive Cultural Marxism. These stone-cold traitors have quite stealthily created a super-conducive environment for Ordo ab Chao by irreparably tearing the fabric of American society. By dividing the American people in so many profound ways, it’s never been so clear why “a house divided against itself cannot stand“.

Therefore, the Patriot Movement must unify, first and foremost, in order to safeguard the POTUS. The Right especially needs to make it clear to every culpable party that WE WILL NOT STAND FOR THIS STOLEN ELECTION. And, that we will not tolerate or treat kindly the thieves and fraudsters who persist in perpetrating this immense crime spree and covering it up. The communist criminals only do so at their own peril.

It will require that the Right stay alert and agile so as to quickly react to any eventuality. It ought to be quite evident that the radical Left will do whatever is possible and/or necessary to destroy this nation. They have been socially engineered for this very moment, after decades of intense Tavistock mind-control programming, to collapse the United States of America. Their fake utopian goal is to fabricate a USSA where “A” stand for a new marxist paradise—Amerika. Don’t he biggest Democrat-run cities in the Northeast and on the Left Coast stand as glaring testaments to this ugly reality?

Perhaps the best approach the Right can take to this election theft-in-progress is to correctly understand that the Biden-Harris ticket has already surrendered any victory to Trump. See: TRUMP HAS WON BY DEFAULT—Here’s why!

That’s because the extraordinary degree of proven fraud and felony election crime has risen to the level of a nationwide RICO crime wave. And, that crime wave continues to wash over the country to this very day. We’re talking about a full-scale and ongoing RICO-level criminal organization that is treasonously operating to subvert the U.S. Federal Government and overthrow the POTUS. But it’s the pervasive and perfidious vote fraud that really matters as far as the final election outcome is concerned.

Let’s be very clear about the 2020 election outcome:
“FRAUD VITIATES EVERYTHING“.

It’s time to be prepared to light those torches and grab those pitchforks.

No matter how this election process evolves nearly one half of the electorate is going to be mad—VERY MAD! Hence, the end game is sure to engross the U.S. citizenry as no other drama of the third millennium. Both sides know in their bones that the final outcome is certain disaster for one or the other. However, the Left has no legitimate reason or right to attempt to overturn the very real Trump landslide victory. On the contrary, the Democrat, Deep State and Globalist co-conspirators all need to be prosecuted to the fullest extent of the law.

SEDITION AND TREASON
WILL BE DEALT WITH
SWIFTLY AND SEVERELY

Lastly, there’s only one way to successfully deal with such a precarious cross-border pandemic of treason and sedition: MILITARY TRIBUNALS: Why They Are Absolutely Necessary