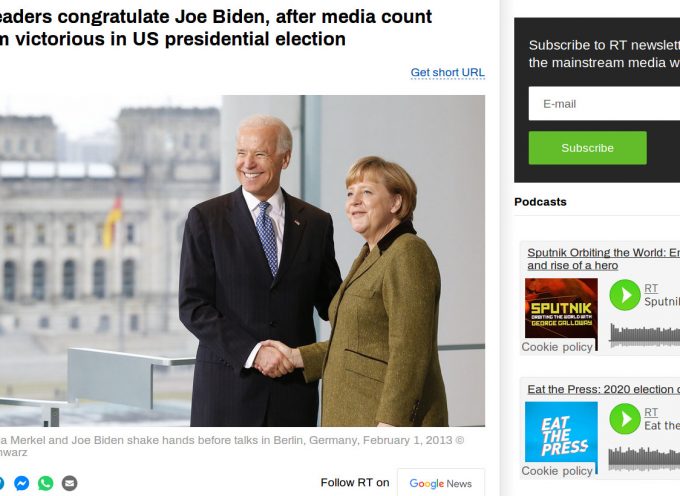 When I saw this I could not believe my eyes: “European leaders congratulate Joe Biden, after media count declares him victorious in US presidential election“.

This is truly unheard of: foreign leaders declare a winner in a US election even BEFORE the vote count has been certified by US courts!!!  Talk about “interference in US elections” – this really takes the prize!

Yeah, I know, these EU knuckleheads also declared Guaido and Tikhanovskaia had won.  But let’s be realists here: it is one thing to declare some victor in small and extremely weak countries, and quite another to do that with the supposed Sole Hyperpower and Planetary Hegemon.

We have to wonder what the point of these declarations are and I think the answer is obvious: put the maximal pressure on USSC Justices to accept the fait accompli (which, of course, is neither a fait, nor is is accompli, but nevermind that!).

Just the fact that the US Deep State has the power to force the EU leaders into that kind of blatant intervention is the best proof that there are no real democracies in the West – all we are dealing with is a transnational plutocracy.

Bottom line: the struggle for the liberation of the West from this gang of corrupt megalomaniacs is now on.  Yes, right now the resistance in the West looks very week, poorly organized and even very corrupt (just think of how corrupt the GOP is!).  But those who are familiar with Hegelian dialectical analyses will immediately see that this is an unstable situation which cannot and will not last.