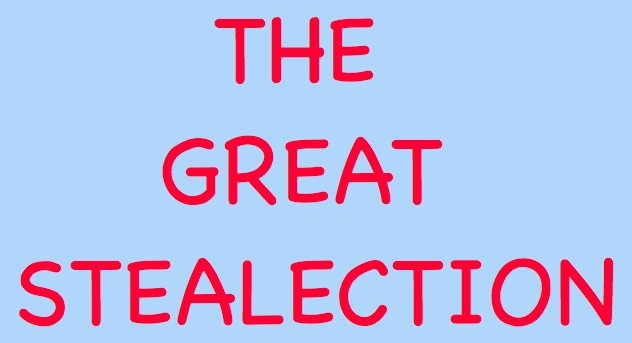 And they both know exactly how it was done.

What the American people have just witnessed is the most reckless and transparent and brazen election theft in U.S. history.  No, in recorded world history!

The multiple institutional perpetrators of this highly organized and complex criminal conspiracy really thought they could get away with this “Heist of the Millennium” scot-free because they control the whole system, especially the mainstream media.  As follows:

“Now we’re hearing every major organ of propaganda and prevarication throughout the CIA’s Mockingbird Media repeat and mock the Right about the ‘lack of evidence’.  This is just a typical psyop deceit that the Mainstream Media knows will successfully con those glued to the idiot box.  However, the idiocracy is shrinking fast!  People, on the Right and Left are watching this nationwide crime scene like a hawk.  The reality on the ground is that there’s already a massive and rapidly growing body of hard evidence that categorically proves election theft.  As for that evidence, let’s be clear.  The perps did not take the time or measures to hide anything, so much of their ongoing crime spree was practically recorded on video.  They really thought they could get away with the heist of the millennium as long as the MSM completely covered it up, which they have done.

Truly, there has never — EVER — been anything like THE GREAT STEALECTION.

The Democrats, to their great detriment, had 4 long years to plan out this election theft so it was really just a matter of execution for them and their numberless co-conspirators.  Colluding intimately with Deep State, Mainstream Media and the New World Order globalist cabal, the DNC leadership put together a staggeringly scandalous scheme they really thought they could get away with.

However, in this Age of the Internet it’s a lot more difficult to get away with conducting a full-scale crime wave in all 50 states when there are witnesses on every street corners armed with smartphones and tablets.

And, because the 2020 POTUS election was really set to be an overwhelming Trump landslide, the Democrats had to suspend many standard operating procedures when carrying out such a massive election theft.

In point of fact, the proof presented thus far indicates the perps cut a lot of corners, so much so that they will soon be indicted, arrested, prosecuted and incarcerated for the felony crimes of treason and sedition willfully committed to overthrow the U.S. Federal Government via election theft.

Just how vast and convoluted is this “complex criminal conspiracy” to steal the 2020 POTUS election?  Take a good look at any one of these highly radioactive exposés to comprehend the sheer depth and breadth of this ongoing crime spree.

ELECTIONgate: You’ve never seen anything like the ballot fraud and election theft perpetrated by the Democrats this week!

ELECTION THEFT 2020: It’s much worse than anyone knew!

Each of the preceding posts lays out different aspects of this immense criminal case that is slowing being constructed within the virtual PI space that’s presently manifesting across all of cyber-space.

When this case is completed, and it will quite likely never be concluded because of the inescapable necessity of the countless perpetrators to forever commit more crimes in order to cover up their previous crimes, it will prove — beyond a shadow of a doubt — that the 2020 POTUS election was willfully and calculatedly stolen by the Democrat Party.

In other words, the Democrat criminal enterprise will be proven guilty by this extreme case of premeditated theft carried out at the highest echelons of American government and Corporate America.  This criminal case will especially reveal the direct involvement of the U.S. Intelligence Community, particularly the C.I.A., NSA, FBI and DoJ.

What follows is just a glimpse at the treasonous plot and traitorous machinations of the those treacherous intel agencies.

As this swiftly expanding criminal case of flagrant election theft is pieced together during the coming weeks, it’s of paramount importance that the Patriot Movement remain alert to the myriad instances of cover-up.  For those deliberate acts of institutional cover-up also constitute a hardened pattern of criminal activity which must be prosecuted as treason and sedition.

All of the major corporate media companies have incriminated themselves in this international criminal conspiracy and can thus be held accountable and closed down based on the gravity of their crimes against the American Republic.

Because President Trump actually won by a landslide vote, the Patriot Movement ought to take great consolation in the fact that a great majority of Americans ardently support the President.  The Democrats know this which is why the steal became so obvious…to the point that it’s now universally known as THE GREAT STEALECTION.

The crucial point is that this fight will eventually come down to people power.  For when the facts are known about this exceedingly blatant and brash election theft, the will of We the People can be exerted to reverse the prematurely announced MSM result.

Incidentally, since when does the ever-untrustworthy Mainstream Media determine who actually won the POTUS election.  Not only does the MSM have no right or authority or legitimacy to call this election at such an early stage of serious legal development, they have already proven collectively to be Trump haters of the highest order. See: PSYOP ALERT: The mainstream media has launched a coordinated effort to proclaim Joe Biden President-Elect.

In light of these and many other conspiratorial plots by the Left to legitimize the fake election win for Biden, it’s imperative for the Right to remain resolute and vigilant.  President Trump must be able to show the Democrat Party, Deep State and NWO globalists that his support is simply overwhelming.  By every indication of the real vote as evidenced by pre-election campaign rallies and exit polls, Trump probably captured in excess of 55% of the national vote.  That’s why the steal became so conspicuous and desperate.

Hence, there will come a time between now and Inauguration Day when the Patriot Movement will need to flex their muscles and strut their stuff.  For only a dramatic show of people power will sufficient put the perps on notice that their criminal conduct will no longer be tolerated.  And, that it will be prosecuted to the fullest extent of the law in order to deter future schemes to subvert the US government.

When the Obamas, the Clintons, the Bidens, the Bushes, the Podestas, Soros, Bloomberg, Harris, Pelosi, Schumer, Schiff, Nadler, Brennan, Clapper, Hayden, Mueller, Comey, Wray, Haspel, Romney, Rosenstein, Zucker, Zuckerburg, Dorsey, Cook, Ocasio-Cortez, Pressley, Tlaib, Omar, et al. are all exposed for their egregious crimes committed against the American people, they will immediately become the MOST WANTED criminals in the USA.  Patriots everywhere will need to send that message LOUD and CLEAR!

The Body of Evidence

For the many armchair detectives, sidewalk investigators, Patriot PIs and election theft researchers, the job of accumulating, analyzing categorizing and safeguarding the voluminous amount of incriminating evidence only grows tremendously by the day.

The number of Alt Media websites dedicated to exposing the Democrat crime wave is also increasing by the week.  Folks who are attorneys or paralegals (both retired and working) are now assisting with the tedious organizational process as the enormous amount of evidence stacks up.

SOTN alone has already published and/or posted a prodigious amount of evidence-grade material.  Some of that is original content emailed by intel whistleblowers and deep insiders; much of it represents reproduced submissions sent from the 4 corners of our global citizen’s intelligence network.

The “Recent Posts” section on the sidebar of the SOTN site provides the best repository of articles, analyses, commentaries and exposés on this Alt Media platform.  Every election theft sleuth, then, is highly encouraged to go there and roam; there are clues and cues, leads and tips scattered all over that need to be traced back to the numerous scenes of the multitude of Democrat crimes.

Here are just a couple of posts that ought to be thoroughly investigated:

This “Special Report” will be the most exhaustive by far ever produced by State of the Nation.  This introductory post serves to inaugurate the first stage of what will become the single most intensive and largest citizens’ investigation endeavor in world history.

Please understand that this exceptionally weighty initiative is not only being undertaken to see President Trump re-elected, it has been launched to ensure the continuity and sovereignty of the American Republic.  For the United States of America will only remain a true constitutional republic and fully functioning representative democracy when the totally broken election system and electoral process are fixed, once and for all.

May God Bless the America Republic

May God Bless the American People

Our SOTN readership should understand that this post represents the first in this multi-series “special report”; therefore, we suggest that folks check back for breaking investigative reports and highly consequential legal developments.  Like the POTUS has recently said with great conviction: “This election is far from over.”