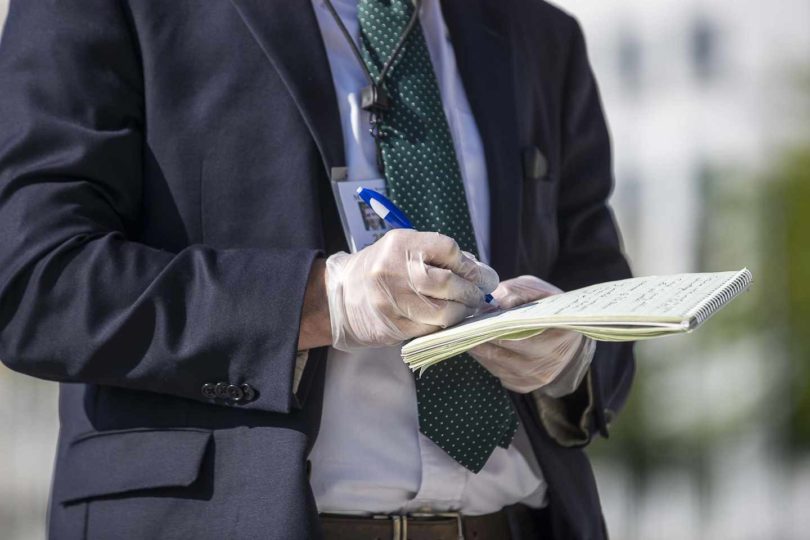 Propaganda, Election Fraud and the Death of Journalism

Easy question: Is it illegal to steal an election or not?

You would have to assume that it is no big deal based on the response to claims of widespread fraud in the contest between President Trump and Joe Biden. Big Media says the evidence just doesn’t exist, and most Americans seem to be lost in a blue haze of blind acceptance that whatever they are told by the talking heads on TV must be true.

This kind of unthinking obedience to authority is a frightening harbinger of an America that is no longer a nation of laws, but rather a nation of edicts. You can already see that unfolding in the sheep-like acceptance of COVID-19 restrictions that blatantly ignore the Constitution. But if you dare do your own independent assessment of facts — whether regarding the efficacy of mask use in preventing spread of coronavirus or regarding the security of electronic voting — you will quickly come to a different conclusion than that which is approved by Big Tech, Big Media and Big Money.

Unfortunately, most people don’t take the time to do their own research. They simply believe whatever is told to them. For those in thrall to the establishment media, that means they believe that Trump’s allegations of election fraud are “baseless.” Remember, the media made that declaration within hours of the election, long before any evidence had been presented in a court of law and before analysis had begun on the raw vote totals. Once that narrative was established, it didn’t matter how many affidavits were presented, how many witnesses came forward, or how much analysis suggested that the vote count may have been manipulated. The jury of the American people had already been tainted by Big Media to believe the narrative that Trump is a sore loser.

Don’t forget, the mainstream media — in the interests of public enlightenment (now known as wokeness) — have spent the past four years reporting as fact that the duly elected president of the United States is a liar, a tax cheat, a Russian puppet, and a racist. In other words, he is a con man who never should have been anywhere near the Oval Office in the first place. So why would anyone now believe his claims that Democrats used phony mail ballots, vote-counting software and foreign manipulation to steal the election? Most of the media is pretending that there is not even a real story to report in what, if true, would be one of the gravest constitutional crises in the history of our republic.

But, the newsrooms at CNN and MSNBC are keeping it from the public. They refused to even carry Giuliani’s press conference laying out the evidence of election fraud. As for Fox News, they covered it, and then put a reporter on the air to say the claims were “simply not true” or “baseless.” Clearly, we are not going to get the truth from the media. Has there been even one reporter for a mainstream outlet such as the Washington Post asking questions about the vulnerability of electronic voting systems to hacking or manipulation? Is any news organization demanding that the Justice Department or FBI get to the bottom of the story?

The loss of a free and neutral press means that democracy cannot work even if its elections were completely above board. The capacity of the people to self-govern is dependent on their access to true and accurate information. Sadly, the opposite principle applies as well. When journalism abandons objectivity in favor of an agenda, then the people are in the position of cattle being led to slaughter.

Thomas Jefferson described the abuses of a free press in 1814 in a letter to his friend Walter Jones:

“I deplore … the putrid state into which our newspapers have passed and the malignity, the vulgarity and the mendacious spirit of those who write for them… These ordures are rapidly depraving the public taste and lessening its relish for sound food. As vehicles of information and a curb on our functionaries, they have rendered themselves useless by forfeiting all title to belief… This has, in a great degree, been produced by the violence and malignity of party spirit.”

Of course, it is just such a malign “party spirit” that informs almost all mainstream journalism in the Age of Trump — a spirit that is visible in the hostility towards Trump himself, but also in the accommodation towards Democrats such as Joe Biden. Last Monday’s Biden press conference was a stunning abdication of responsibility by the media for its much-vaunted role of “speaking truth to power” — or at least asking tough questions.

Three of the first four queries were merely anti-Trump questions asked in a new way. Instead of asking Trump “How do you justify your unprecedented attempt to obstruct and delay a smooth transfer of power?” the reporters merely asked Biden what he thought about Trump’s “unprecedented attempt” blah blah blah. Then the next three questions were about COVID, which after six months of campaigning, even Sleepy Joe Biden could answer with his eyes closed.

Isn’t the media going to hold Biden accountable just like they claimed to hold Trump accountable? Why not ask about the curious patterns of vote counting in Michigan, Pennsylvania, Wisconsin and Georgia that make millions of people think Biden tried to steal the election? Shouldn’t he be asked to support a full investigation to prove his victory was legitimate? How about a question about whether Hunter Biden will come out of hiding now that the election is over? How about asking the “president-in-waiting” to condemn the BLM and antifa violence that sent several innocent Trump supporters to the hospital two weeks ago?

How about our celebrity journalists celebrate their own crucial role as defenders of democracy? If they don’t want to “render themselves useless,” they need to swear allegiance to facts, wherever they lead, and not to one party. Or as Sen. John Kennedy of Louisiana put it more indelicately, “They have to be equal opportunity assholes.”

But they aren’t — and sooner or later the American people will get tired of being manipulated. Journalism is supposed to give an honest account of the facts so that people can make up their own minds what they believe to be true. Propaganda, on the other hand, is a dishonest attempt to persuade people not to examine the facts for themselves. Journalism starts with facts and allows people to reach their own conclusion. Propaganda starts with a conclusion and manipulates people into accepting it as fact. You can decide for yourself whether what we have today is journalism or propaganda.

But the bottom line is this: Whether or not Donald Trump can prove his case in court should be irrelevant to the job of the press. What honest reporters ought to recognize is the significance of the allegation itself, the historical nature of the crime being alleged, and the importance to the future of our republic that the case must be heard.

Too bad there are so few honest reporters left.