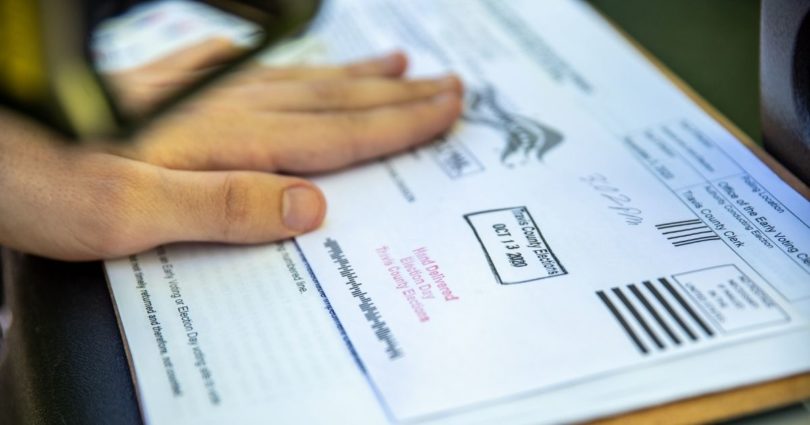 Payback really is a B.

And now the wheel has turned around and will squash the whole Swamp.

Nancy’s relatives own Scorecard, the program used to “flip” vote tallies, as shown in real time in this video. Just pay attention and you will literally see how positive votes for Trump were instantly converted into votes for Biden in exactly the same amounts:

A friend just sent this video she recorded election night.

At the end of the video the totals on the screen are for PA are:

They and their friends who work for CISA, the so-called Cybersecurity and Infrastructure Security Agency —- yet another of the ubiquitous and thoroughly unauthorized “Agency” Subcontractors on the Papist Municipal Government payroll, are caught red-handed in the act, and they are now desperately engaged in damage control.

It’s not going to work.

They took the bait, did the deed, and they are going to pay for it.

The penalty for willful election fraud in this country is fifty (50) years in prison.

Even with time off for good behavior, Nancy and Chuckie and Joey and probably even young Kammi and all their pals are going to time-out in striped pajamas.

The moment Biden foolishly declared victory, he “enforced” the fraud. And that sets off an entire chain of event reactions that leave him and those with him liable for their actions.

The election for the office of “President of the United States” was patently fraudulent due to the nature of the Municipal bankruptcy (Chapter 7) and its settlement two days after the Election; there is no valid Municipal Office left to occupy, and we have called them on it.

They won’t be able to finesse an unobserved “succession” and we are not assuming any contracts involving Joe Biden or Ms. Harris.

The other election for the Office of President of the United States of America was valid, but, by law, the only people eligible to vote in that election are the U.S. Citizens. Don’t believe me? Look at their corporate By-Laws published as their Fourteenth Amendment and maintained as their private law since 1868.

Put simply, they’ve attempted a Bait and Switch, only using the Offices involved instead of the candidates.

They may or may not have elected Joe Biden to be “President of the United States” — an office that disappeared along with the UNITED STATES, INC., two days later.

But they have definitely attempted to use this as an excuse to claim that they won the Office of the President of the United States of America, too — an Office belonging to a separate Territorial corporation that has different rules for counting ballots.

The election for the President of the United States of America just happens to be a closed election.

Municipal citizens of the United States aren’t supposed to be participating in it at all, and simply from the total number of ballots cast, President Trump has iron-clad proof that a monstrous amount of voter fraud occurred.

He doesn’t even have to argue it. All he has to do is show the total number of ballots cast and it is self-evident that massive numbers of Municipal citizens crossed the line, committed the crime, and did indeed act as foreign agents trying to influence the Territorial Election.

Isn’t it ironic that the very people who have been screaming for four years about foreign governments trying to influence these elections, have been caught in the act, doing precisely that?

LOL. As I have often told you, the Satanists follow a strict modus operandi. They always accuse the other guy of doing what they are in fact doing themselves.

And now, President Trump has them squarely cornered in a trap of their own making. And we have them flat on the floor, by refusing to contract with their new version of Municipal Corporation.

It doesn’t matter who our Municipal Employees elected to lead them. They don’t have a contract.

It’s all over but the shouting and the arrests.