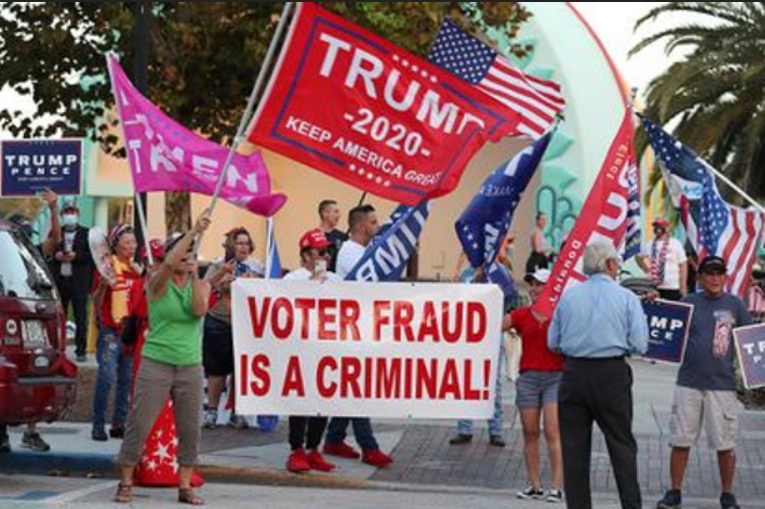 There’s a growing body of detailed information explaining both the traditional election fraud and the computer vote theft that threw this election to Biden. Indeed, in the past weeks, our American Thinker authors have added greatly to that body of work. Today, though, there was an explosion of information — including Rudy Giuliani’s stunning statements before the Pennsylvania Legislature — so I wanted to put a road map together for you in a single post.

Fasten your seatbelts and hold on to your hats, because this is going to be a wild ride of amazing, horrifying, and fascinating information about the greatest election heist in American history.

This video is a bombshell…..any normal person can see this is absolute fraud of 800k votes……

Even the crowd gasps….. pic.twitter.com/33whoS3VSG

[See the update below, though, explaining that contemporaneous data completely contradicts Giuliani’s statement.]

2. One witness whom Giuliani questioned testified about the normal appearance of real-time vote-tallying graphs, even if one candidate is far ahead of the other. No matter what, there’s always a smooth curve rising up on the graph. When there’s a huge spike, it signals fraud. The witness described almost 604,000 votes arriving at once as a huge bolus for Biden, with slightly over 3,200 votes for Trump.

.@RudyGiuliani: Of the 600K votes added during curious "spikes" in PA, how many went to Biden?

Witness: "I think our figures were about 570-some-odd-thousand."

"And how much for Trump?

3. Gregory Strenstrom testified before the Pennsylvania Legislature that USB drives with data were missing, that people were walking around with bags of USBs that they plugged into voting machines, that the chain of custody for drives and ballots was broken, that unopened mail-in ballots and 47 USB cards vanished, and that various other documents and records were destroyed.

As a reminder, it’s illegal to destroy voting records. Moreover, the doctrine of spoliation holds that when people destroy records they’re required to maintain, the law will presume that the records were adverse to them.

4. “Anomalies in Vote Counts and Their Effects on Election 2020.” We’ve been hearing since November 4 about those bizarre vote spikes for Biden, all of which occurred in the wee hours of the morning. If you mention them to a Biden-supporter, you’ll find them dismissed. You’ll be told that it was normal for Biden to receive votes in the hundreds of thousands, all at once, because he was the king of mail-in ballots.

At the link, you can see a summary of all of those weird spikes in Michigan, Wisconsin, and Georgia, none of which can be explained away simply by saying “mail-in ballots.” There’s math, but it’s accessible and will help you understand what everyone is talking about.

5. “2020 Election: Could Trump’s claims have merit?” This is another analysis of the voting data from Georgia, Michigan, Pennsylvania, and Wisconsin showing data spikes that cannot be accounted for in the natural order of things.

6. Russell Ramsland, Jr., is a co-founder of Allied Security Operations Group, LLC (ASOG). His company has been tracking problems with computer voting systems (including Dominion and Smartmatic) for years. You can read here his affidavit explaining how the computer data show vote manipulation in the contested states. I especially appreciate the huge voter turnout for Biden, with many places recording that more than 100% of registered voters showed up.

Additionally, I cannot recommend highly enough the following 45-minute PowerPoint discussion that Ramsland gave for Jerome Corsi’s broadcast. It’s not specifically about the election. Instead, it is about how these computer systems work and why they are so vulnerable to fraud. I thought I’d be a bit bored with all the technical information, but I was mesmerized. If you want to understand inexplicable elections (including, in my opinion, Obama’s 2012 re-election), this video is a must-see:

(I assume that Democrats didn’t bring significant fraud to the 2016 election because they didn’t think they had to. They were so confident that Hillary couldn’t lose that they skipped taking out their “insurance policy.”)

7. Joseph Hippolito has a solid summary of the facts showing why Trump will win when all the fraud is exposed. You might want to pair reading it with reading the complaint Sidney Powell filed in Georgia just before midnight on Wednesday.

8. The Thomas More Society’s Amistad Project filed a lawsuit in Georgia “arguing that more than 200,000 votes in Georgia may have been either illegally counted or improperly uncounted.” This number matters because Biden’s alleged lead over Trump is only a little over 12,000 votes.

9. And here’s a bonus (hat tip: Gateway Pundit) just to remind you about the huge wellspring of love those 80 million Americans who (ahem) “voted” for Joe Biden feel for the man:

Joe Biden Gets Only 1,000 Viewers to Watch His Thanksgiving Address Live — But He Got 80 Million Votes? — What a COMPLETE JOKE! via @gatewaypundit https://t.co/B7cLqIEeci

UPDATE: Richard Baehr has informed me that, while Rudy’s statement about the number of mail-in ballots was fascinating, it was also incorrect.

A Florida professor meticulously tracked the early mail-in voting in Pennsylvania. including the number of absentee ballots requested and the number returned, all while noting party registration. and county.  Richard says, “I tracked this every day and the numbers requested and received were both over 2.5 million. This information is on the Pennsylvania state election website and the professor’s. I have no idea where Rudy gets his numbers, but they are wrong.” In other words, to the extent Rudy says 2.5 million mail-in votes got counted, the professor’s data says that the same number were both requested and logged-in as returned.
See also, Richard’s article from November 6, which I hadn’t incorporated into my thinking when I posted Giuliani’s statement.