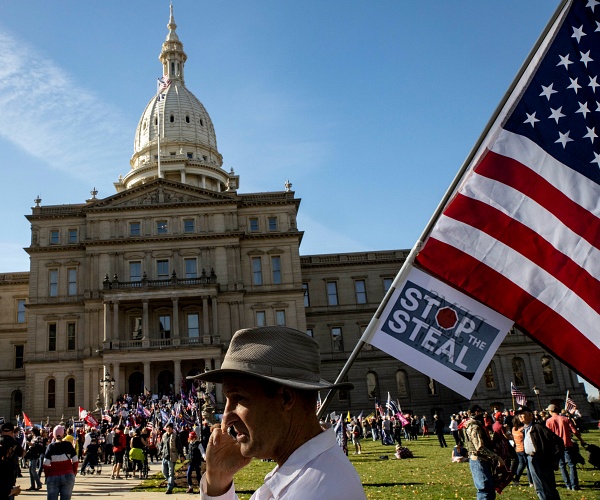 On Monday, Norm Shinkle drew national attention as the lone member of the Michigan Board of Canvassers who abstained from voting to certify the state’s 16 electoral votes for Joe Biden.

But the vote of Shinkle, a Williamston attorney and 8th District Republican chairman, came after what he called “a whole string of anonymous calls threatening my family and me, and 20 to 30 protesters on my front lawn Saturday night.”

“The mentality here was ‘whoever threatens the most wins,’” Shinkle told Newsmax on Monday evening, soon after the six-hour meeting of the Board of Canvassers. “And I was ‘Dr. Evil’ to the left wing.”

Days before the vote, Shinkle made clear his desire to vote to delay certification pending a complete audit of the 5.5 million votes cast Nov. 3 in the Water Wonderland.

But, he told Newsmax on Saturday, “I need the evidence [of errors in the vote-count] and I need it in 48 hours.”

Shinkle said he has carefully watched President Donald Trump’s legal team — Sydney Powell, Rudy Giuliani, and former Kansas Attorney General Phill Kline — “and I want to see what they have in terms of hard evidence.”

Lacking the desired evidence, he abstained to vote. The other Republican on the Board of Canvassers, state House Republican Caucus attorney Aaron Van Langevelde, voted with the two Democrats to certify the outcome of the election. The two Democrats are Jeannette Bradshaw, recording secretary of the International Brotherhood of Electrical Workers Local 58, and Macomb County Commissioner Julie Matuzak, former political director of the American Federation of Teachers.

By the time he sat down with the Board on Monday, Shinkle said, he had received more than 40 telephone calls and 7,000 emails — most of them calling on him to certify the votes for Biden and many of them threatening.

The calls and emails, he believed, were “most likely orchestrated by the state Democratic Party and labor unions.”

Shinkle also believes that the “public comments” that were Skyped and Zoomed into the meeting before the vote were “completed orchestrated by the left. Nearly all of the participants warning against a vote not to certify used the exact words ‘disenfranchishing black and brown voters’ and that was a clear sign this was scripted.”

He emphasized to Newsmax he still has “many questions” about the Dominion Systems company whose voting machines are used in much of the state and about the role of the “Rock the Vote” Democrat turnout apparatus.

Before the vote, Shinkle read a strong statement denouncing liberal Democrat and Secretary of State Jocelyn Benson and calling for an investigation of illegal voting in the 2020 Michigan election and a plan to fix the system. In so doing, he echoed a similar call from State Senate Republican Leader Mike Shirkey.

As for the threatening phone messages, Shinkle told Newsmax “the ones that mentioned my wife and children or said ‘we know where you live’ I turned over to the police.”