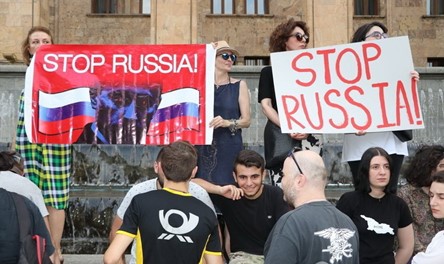 Did you ever wonder why ‘western’ mainstream media get stories about Russia and other foreign countries so wrong?

It is simple. They hire the most brainwashed, biased and cynical writers they can get for the job. Those who are corrupt enough to tell any lie required to support the world view of their editors and media owners.

They are quite upfront about it.

Here is evidence in form of a New York Timesjob description for a foreign correspondent position in Moscow:

Vladimir Putin’s Russia remains one of the biggest stories in the world.

it sends out hit squads armed with nerve agents against its enemies, most recently the opposition leader Aleksei Navalny. It has its cyber agents sow chaos and disharmony in the West to tarnish its democratic systems, while promoting its faux version of democracy. It has deployed private military contractors around the globe to secretly spread its influence. At home, its hospitals are filling up fast with Covid patients as its president hides out in his villa.

If that sounds like a place you want to cover, then we have good news: We will have an opening for a new correspondent as Andy Higgins takes over as our next Eastern Europe Bureau Chief early next year. 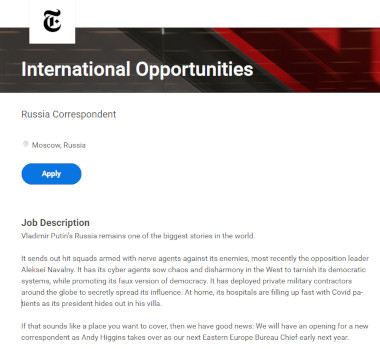 bigger
To be allowed to write for the Times one must see the Russian Federation as a country that is ruled by just one man.

One must be a fervent believer in MI6 produced Novichok hogwash. One must also believe in Russiagate and in the multiple idiocies it produced even after all of them have been debunked.

One must know that vote counts in Russia are always wrong while U.S. vote counting is the most reliable ever. Russian private military contractors (which one must know to be evil men) are ‘secretly deployed’ to wherever the editors claim them to be. Russia’s hospitals are of course always much worse than ours.

Even when it is easy to check that Vladimir Putin (the most evil man ever) is at work in the Kremlin the job will require one to claim that he is hiding in a villa.

Most people writing for the Times will actually not believe the above nonsense. But the description is not for a position that requires one to weigh and report the facts. It is for a job that requires one to lie. That the Times lists all the recent nonsense about Russia right at the top of the job description makes it clear that only people who support those past lies will be considered adequate to tell future lies about Russia.

No honest unbiased person will want such a job. But as it comes with social prestige, a good paycheck and a probably nice flat in Moscow the New York Times will surely find a number of people who are willing to sell their souls to take it.

Interestingly the job advertisement does not list Russian language capabilities as a requirement. It only says that ‘Fluency in Russian is preferred’.

‘Western’ mainstream media are filled with such biased, cynical and self-censoring correspondents who have little if any knowledge of the country they are reporting from. It is therefore not astonishing that ‘western’ populations as well as their politicians have often no knowledge of what is really happening in the world.