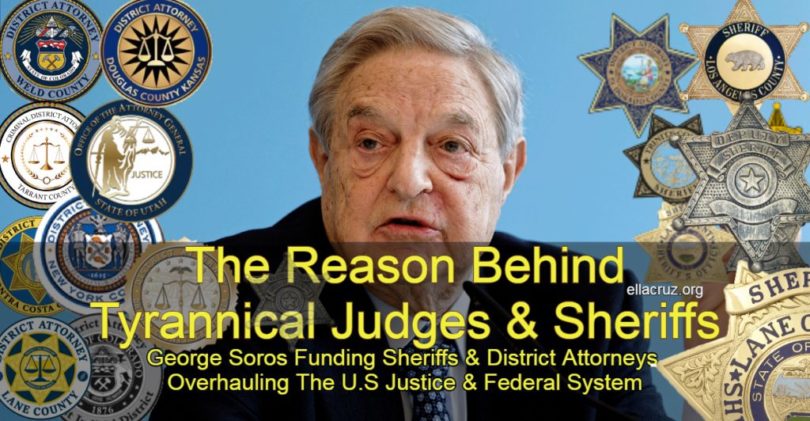 With all these tyrant governors and sheriffs running the UN & the WHO-Rockefeller-Bill Gates vaccine agenda at all costs, violating the Constitution by raiding people’s home in squads and pulling them off their homes, or echoing the WHO in raiding and “isolating” members of the family who have been in contact with the virus, it makes clear that a solo sheriff breaking his oath is not the case but it is a “system”. A system that has trained and installed tyrant individuals with a proper blueprint. Otherwise, it is impossible for all these officials who have taken their oath on the Constitution,  to perform a unique anti-Constitutional behavior in different counties and states.

I remembered an article about Soros buying Judges and ….especially in Texas because for God’s sake….you don’t mess with Texas….that was the foundation of American patriotism…It was an earing in our ears…that if you can take Texas down, you can take America down.

So I have searched for the mentioned article and now connecting the dots becomes a piece of cake. Soros has been “selecting” Judges and district attorneys for long. In RING OF THE CABEL, I explained the process as follows but at that time he was not collecting Sheriffs. So just imagine how worse the situation now today should be.

While people are convinced to elect district attorneys and Sheriffs, Soros funnels massive money into the campaign of his “selected” individual and at the same time, an army of his media goons, character assassination lawyers and social justice protesters campaign against who is running against his candidate and the outcome is very simple. Who has more money sounds bigger does bigger and wins bigger and if in course of the competition, they need to crush the good candidate, they have the money to do it and they run over him/her with their progressive bulldozer.

“What happens when a government starts to break down its own laws? A constitutional crisis is what happens. That’s what we are facing now in 2017, and what the mainstream media insists on volumizing and benefiting from it by pushing more and more the “Constitutional Crisis” Phrase in their selected trajectory; a path that does not target the judges’ misbehavior but the Constitution itself. This whole creepy underground movement aims to defend the “wrong” and condemn the victim. It’s quite like raping a woman and blaming her for provoking the rapist. We actually are seeing this. The illegal alien; Sanchez Milian’s defense, whom the 13-years-old teen in Rockville Maryland claims to be raped by him, was that “she wanted” and he got away with it and took just ONE MONTH in jail. And be sure that one month was for saving their faces to be able to claim there was a sentence.

Soros had influenced the selection of states’ Supreme Court justices all across America, Europe, and Australia. In America, he’s funding massive efforts to end judicial elections, state after state which should be elected based on merit. Instead, he wants to create laws to pick the judges by favoritism, and political interests of liberal attorneys who pick the judges. Not all, but many lawyers are paid liars who academically learn to lie. They don’t care about right or wrong. They care about the winning game. They are specialized in fraudulence and Soros works with these types of lawyers.

In this way, Soros is engineering a judicial revolution. He could install a judge after judge who views the Constitution as his toy or particularly as Soros interprets the constitution and we know he sees it as worthy as a toilet paper. His judges make Compelling statements asking Congress that the constitution as an old document is not good for a modern society and his Democratic Party immediately sends a bill to Congress to be confirmed and become law. So the judge’s decision, in that case, will comply with the new law. He has already spent over $65 million to change state procedures from electing judges to having them appointed. The man who said: “I do business, I don’t care about the consequences” is almost close to succeed in remaking the judiciary system and fundamentally change the way judges are selected in the United States forever. If that happens, believe me, we will be a few months distant from his world government as judges determine who, what, where and what to do.

Soros’s money is spent on “Justice at Stake,” an organization which its principal goal is to replace judicial elections with judges picked up by his attorneys. In this way, judges in all 50 states will never get elected, retained or rejected by voters. He actually says people understand nothing and somebody else, who is eligible should decide for them, so his professional liar attorneys will do so.

He is the self-claimed emperor, and all these fake organizations are his ministries. Through them, he is controlling the world and his throne is “the money throne.” He whines and condemns the positive, free and constructive, Capitalism system while he is reshaping the world with his own, negative downward, destructive, and demonic totalitarian state.

Former Supreme Court Justice Sandra Day O’Connor’s supported Soros, citing that voters are “too un-sophisticated to evaluate judges.” The notion was investigated and fortunately rejected for there was no evidence of such an opinion in a review of 30,000 court opinions. But with all these brainwashed new judges and attorneys it is not guaranteed to be blocked the next time it will be presented as the system is under extreme change imposed by Soros.

“I want a government small enough to fit inside the Constitution.” –Harry Browne”

But today he is many steps further. Actually we are not talking about “steps” anymore. People gave him inches and he took miles. For people thinking and acting for a Presidential candidate is already too much. They may bother a bit and vote for mid-term elections but they really don’t care about governors and Sheriffs and especially district attorneys. Well, let me be more specific. They “do” vote for Sheriffs and Governors but they don’t bother to investigate them before voting. They don’t know where these candidates come from? What is their background? If the campaign motto satisfies them, they vote. One single word or phrase within the slogan can trigger them to vote. It is that simple and it is that dangerous and it is happening that soon. (Read my note at the end of the article)

An article on Politico writes: