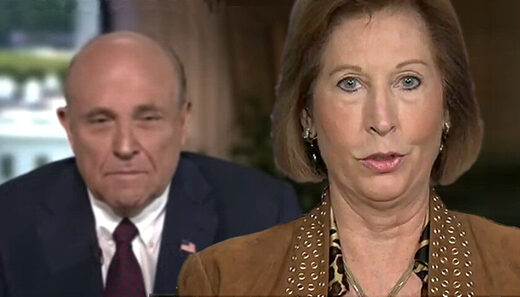 Today several of President Trump’s lawyers, including Rudy Giuliani and Sidney Powell, held a press conference in which they alleged that they have convincing if not conclusive evidence that the presidential election was rigged, and that in addition to garden variety voter fraud, hundreds of thousands of votes were added to Joe Biden’s totals through electronic manipulation. This is the familiar issue that involves Dominion and SmartMatic software. Here is the press conference; it begins around an hour into the video.

There is circumstantial evidence of more than a normal amount of voter fraud in this year’s election, but Trump’s lawyers have not yet presented most of the evidence supporting the electronic claims that they must rely on to have any hope of reversing the outcome of the election. So we can only reserve judgment for now. It is hard to understand what motive lawyers like Sidney Powell and Lin Wood might have to make explosive claims that they cannot prove, which would be career-destroying. But how strong their evidence will ultimately be, we don’t yet know. I hope their claims turn out to be well-founded and provable.

However: I got an email today from a Minnesota resident, a conservative and a smart guy who is the CEO of a company, and later talked with him on the phone. He has taken the trouble to read the filings that have been made so far by Trump’s lawyers. He directed my attention to an affidavit signed by Russell Ramsland, a Texas resident who is an expert on cyber security. The affidavit was filed by Lin Wood in the Georgia lawsuit, but it relates entirely to Michigan, and it is a safe bet that it has been filed in one or more cases in that state as well.

The Ramsland affidavit is part of the Trump team’s case relating to Dominion. In paragraph 9, the affidavit states:

Based on the significant anomalies and red flags that we have observed, we believe there is a significant probability that election results have been manipulated within the Dominion/Premier system in Michigan.

What are those anomalies and red flags? Paragraph 11 explains:

Another statistical red flag is evident is evident in the number of votes cast compared to the number of voters in some precincts. A preliminary analysis using data obtained from the Michigan Secretary of State pinpoints a statistical anomaly so far outside of every statistical norm as to be virtually impossible. […] There were at least 19 precincts where the Presidential Votes Cast compared to the Estimated Voters based on Reported Statistics exceeded 100%.

This is a screenshot of the list of 19 precincts: 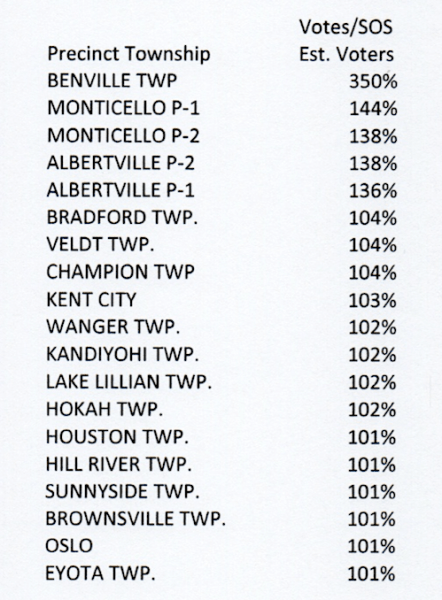 This list of 25 precincts or townships (a number that does not obviously fit with the preceding language) follows: 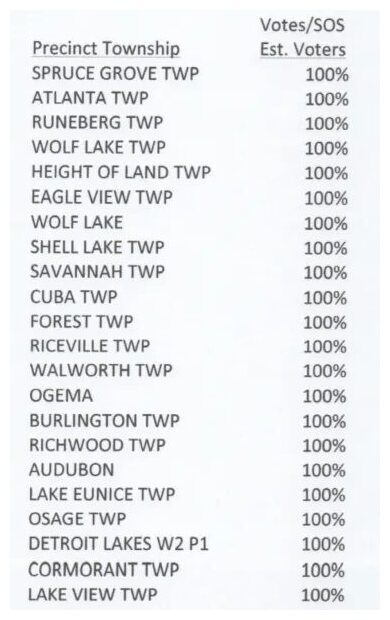 Here’s the problem: the townships and precincts listed in paragraphs 11 and 17 of the affidavit are not in Michigan. They are in Minnesota. Monticello, Albertville, Lake Lillian, Houston, Brownsville, Runeberg, Wolf Lake, Height of Land, Detroit Lakes, Frazee, Kandiyohi-these are all towns in Minnesota. I haven’t checked them all, but I checked a lot of them, and all locations listed in paragraphs 11 and 17 that I looked up are in Minnesota, with no corresponding township in Michigan. This would have been obvious to someone from this state, but Mr. Ramsland is a Texan and the lawyers are probably not natives of either Minnesota or Michigan.

Evidently a researcher, either Mr. Ramsland or someone working for him, was working with a database and confused “MI” for Minnesota with “MI” for Michigan. (The postal code for Minnesota is MN, while Michigan is MI, so one can see how this might happen.) So the affidavit, which addresses “anomalies and red flags” in Michigan, is based largely, and mistakenly, on data from Minnesota.

This is a catastrophic error, the kind of thing that causes a legal position to crash and burn. Trump’s lawyers are fighting an uphill battle, to put it mildly, and confusing Michigan with Minnesota will at best make the hill steeper. Credibility once lost is hard to regain. Possibly Trump’s lawyers have already discovered this appalling error, and have undertaken to correct it. But the Ramsland Affidavit was filed in Georgia just yesterday.

A postscript: has Mr. Ramsland inadvertently stumbled across evidence of voter fraud in Minnesota? I seriously doubt it. The venues in question are all in red Greater Minnesota, not in the blue urban areas where voter fraud is common.

Trump’s lawyers have not yet had their day in court, but they will have to do a great deal better than this if they hope to succeed.