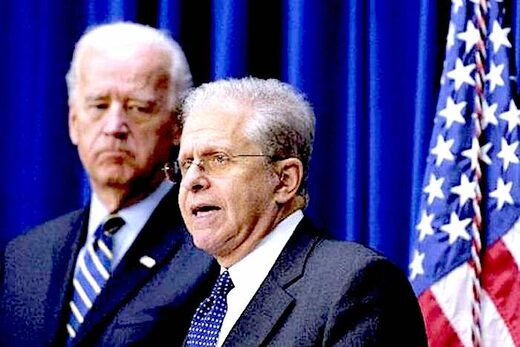 If taking claims to court undermines democracy, how to defend Democrats’ vociferous and repeated claims that Donald Trump stole the election in 2016 with the help of Russia?

A prominent liberal legal academic who spent the last four years pushing outrageous, discredited, and debunked conspiracy theories about Donald Trump stealing the 2016 election said on Fox News Sunday that refusal to accept the legitimacy of the 2020 presidential election threatens the country.

“He is undermining democracy because there are millions of people who will believe him even though there is nothing to his arguments and no evidence to back them,” Harvard Law professor Laurence Tribe said of President Trump’s litigation regarding the November election.

As Trump and many of his 74 million voters express concern about the security of the 2020 election, in which many states rushed to expand mail-in balloting while dramatically lowering scrutiny of mail-in ballots, many media figures have condemned their efforts to litigate the results. 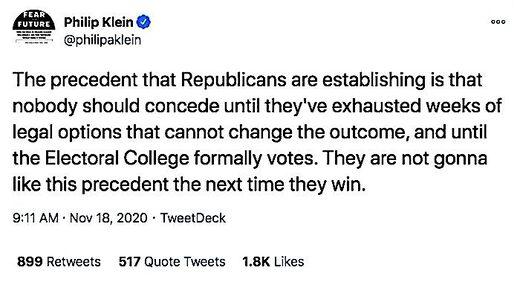 Leaving apart the question-begging about what the results of litigation will be, readers were aghast that Klein seemed to completely forget the four long years Democrats and other anti-Trump activists spent refusing to acknowledge the legitimacy of Trump’s presidency. 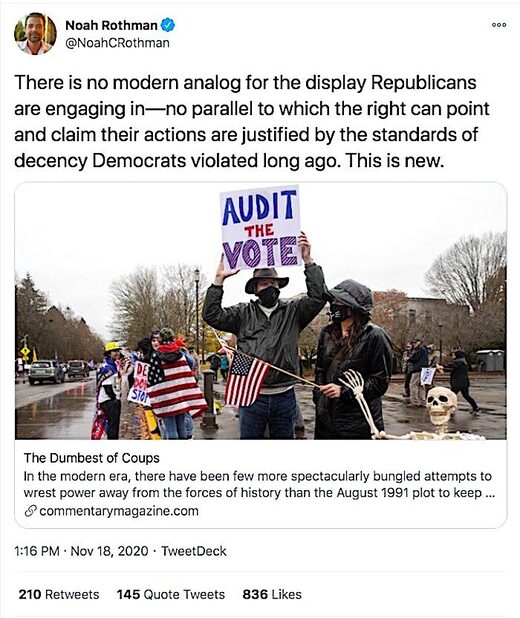 Of course, candidates routinely go to court in election disputes, including presidential candidates in 2000, 2004, and 2016. As for the outlandish claim that there is no analog to a few weeks of litigation, it is perhaps worth noting that Rothman helped contribute to the Russia collusion hoax at a time conservative readers were desperate for assistance in fighting the false narrative.

No conspiracy theories of recent vintage have damaged the country as much as the ones Tribe (and many other anti-Trump media figures) trafficked in each and every day of the last four years from prominent perches in politics, media, and the academy. If taking claims to court undermines democracy, how to defend Tribe’s vociferous and repeated claims that Trump stole the election in 2016 with the help of Russia?

Tribe began pushing the Russia collusion theory on , well after the Hillary Clinton campaign had secretly developed and begun running its “Russia collusion” campaign operation, but before the FBI had started its Crossfire Hurricane investigation. “I’m not into conspiracy,” he wrote, before suggesting Russian oligarchs had compromised Trump with business deals and made him develop a foreign policy that U.S. allies should be responsible for more of their own anti-Russian defense budgets. A follow-up tweet said Trump was hiding his tax returns in order to hide his business relationship with Vladimir Putin.

By July 28, 2016, Tribe was wondering if Trump had committed the capital crime of “treason.” By July 29, 2016, he was proposing wringing Trump on charges of violating the Logan Act. On October 17, 2016, he began suggesting Trump had rigged the election against Clinton.

The rhetoric ramped up after Trump’s election, which Tribe attributed to Russian “”On November 17, 2016, Tribe promoted a plan to get Electoral College delegates a briefing on the Russia collusion conspiracy theory, in the hopes it would keep them from registering their votes for the duly elected Trump. He pushed the campaign for the next month. In late November, he said Trump would be violating the emoluments clause. On December 10, 2016, Tribe again claimed Trump had rigged the election with Russia’s help.

Tribe alleged that Trump’s first pick for secretary of state, Rex Tillerson, was a compromised Russian agent. At the end of December, Tribe was pushing claims about Russia “hacking our democracy.” On January 6, 2017, Tribe was talking about election systems being the “most critical” part of the country’s infrastructure, which was why he was so concerned about Russia’s “attack” on them.

On the same day, he said of the hacking of Democrat National Committee emails that “Russia’s hacking” had significant “impact on 2016 election.” On January 8, 2017, Tribe said that it was an “understatement” to say Trump was a “Russian spy.” On January 18, 2017, Tribe called for a special counsel to “investigate Trump collusion with Putin.-

That was all before Trump’s inauguration.

After Trump’s inauguration, Tribe continued to question Trump’s legitimacy daily, up to today. Just this past May he claimed that Trump was colluding with Putin to steal the 2020 election, just like he supposedly had done in the 2016 election.

On major cable networks and in major newspapers, Tribe was an omnipresent leader of the efforts to oust Trump from office. He pushed for impeachment — for unclear reasons — beginning in May 2017. He pushed for it in the spring of 2019, too, for good measure. He guided Democrats on how to handle their eventual impeachment — they had to settle for impeaching Trump over something unrelated to Russia collusion after that fell apart.

My hunch = DJT is hiding something darker & more dangerous than #goldenshowers! Putin must have a noose tightly around POTUS's neck. https://t.co/hRpEK1M5Jj

The NON-salacious aspects are the deadly serious ones: they start to shed light on why POTUS keeps licking Putin's boots . . . . https://t.co/3tWshJw2kT

I usually go with @frankrichny, but not this time: what I've long figured Putin has on Trump is as bad as it could possibly be https://t.co/yTUm4gKsFL

1/ What we really need to learn about is Trump's debts in Russia and China. That's where https://t.co/JwOwot44Lj

He encouraged the firing of Mike Flynn for merely having a conversation with a Russian counterpart. He said that Trump had committed a “high crime or misdemeanor” by Feb. 23, 2017. He pushed for Attorney General Jeff Sessions to recuse himself from any oversight of the Russia collusion probe on March 1, 2017.

On March 3, 2017, Tribe tweeted out one of the New York Times articles that pushed the Russia collusion hoax. It was headlined, “A Timeline of Jeff Sessions’ Trump Ties and Meetings with Russia. Tribe said the article was “Useful in destroying all ‘innocent’ explanations” of Sessions’ meetings. He had previously repeatedly called on Sessions to quit or be fired.

The next day he tweeted an elaborate theory of how Trump and Russia colluded with each other and why. Later that month he said that Trump’s protestations of his innocence were evidence that he was obstructing justice. In April, Tribe said that Trump campaign affiliate Carter Page might be guilty of treason, but that since Russia is only an “adversary,” he’s probably safe from the charge. (In fact, there is no evidence of Page committing any crime, even after a year of intense U.S. surveillance of him.)

In April 2017, Tribe amplified claims of nebulous and undefined — and later debunked — “concrete evidence” of collusion with Russia. After spending months complaining regularly that James Comey had cost Clinton the 2016 election, Tribe abruptly changed his tune once Trump fired Comey for poor performance and once Comey began leaking documents to hurt Trump. Then, Tribe began saying that firing Comey was obstruction of justice. He cheered, naturally, the appointment of a special counsel to probe Russia collusion.

In July 2017, Tribe said there was evidence coming of Trump-Russia collusion and “you can take that to the bank.” In September 2017, Tribe said he predicted an “avalanche” of indictments and that it would take a miracle “for Trump to escape being an unindicted co-conspirator.”

It kept going day in, and day out. At one point in 2018, Tribe was personally putting forth a deranged conspiracy theory about Putin or Trump bringing down an airliner to kill somebody who, it turned out, was not on the plane. In 2019, after the special counsel was unable to find evidence of any American colluding with Russia, he wrote:

“Trump might as well have told Putin, ‘You’re cleared to keep up your attack on our democracy, Vlad. Except I can’t quite say it that way, if you catch my drift. We still have the death penalty for treason. Yuck yuck.'”

Later that year, he rejected the idea Trump was either a Russian asset or an idiot. “He’s both,” he said.

All of these things may sound like the rantings of a madman, but Tribe is a very important figure to the left. And his claims about Trump and Russia — and obstruction — became blueprints for the special counsel’s years-long effort to get Trump impeached for something, anything.

Tribe is not a nobody. Politico describes him as President Barack Obama’s “.- He is well known for inventing the practice of “borking.” To bork is “to attack or defeat (a nominee or candidate for public office) unfairly through an organized campaign of harsh public criticism or vilification,” according to the Merriam-Webster dictionary. It is a reference to what Tribe did to Robert Bork when he was nominated by President Ronald Reagan to the Supreme Court. Tribe is also credited with developing Democrats’ strategy of filibustering judicial nominees during the Bush presidency.

Tribe tweeted hundreds, if not thousands, of times about the Russia collusion hoax and how it made Trump an illegitimate president. He wrote op-eds for the Washington Post and appeared on major cable news. He helped Democrats message “impeachment” proceedings as mere “investigations“.”

He’s just one of thousands of pundits, media figures, and Democratic officials who perpetrated the claim that Trump was an illegitimate president. Here’s a quick video showing some high-profile elected officials saying Trump was not legitimate.

The media praised these figures for their stances. Rep. John Lewis refused to attend the inauguration of Trump as president because he said he was “illegitimate.” He was joined in that refusal by more than five dozen — five dozen — Democrats. Lewis said of his refusal to acknowledge the legitimacy of Trump, “I don’t see this president-elect as a legitimate president. I think the Russians participated in helping this man get elected.”

What Democrats and their media enablers put Trump and his Republican voters through these last four years was truly horrific. The media sold the Russia collusion story as a certainty for years. When it unraveled, they either denied that it had unraveled, or ignored it and moved to the next effort to oust Trump.

The false and delusional conspiracy theory, wielded eagerly and viciously by media handmaidens in order to harm Trump and his voters and keep them from accomplishing their policy objectives, damaged the country. While there is no evidence in support of the claim of treasonous collusion with Russia to steal the 2016 election, and in fact not a single American was found to have colluded, it was pushed so relentlessly by liberals that 81 percent of liberals actually believe it was true! Tribe is right that conspiracy theories are harmful to the fabric of the country. He and every single other person who perpetrated the Russia collusion hoax should never forget how much they harmed the country with their lies.

Trump’s 74 million supporters–knowing that their political opponents are willing to spy, fund and fabricate a dossier, push a “collusion” hoax, accuse a federal judge of being a serial gang rapist, run a “resistance” campaign throughout the federal government, manufacture an impeachment, use tech corporations to censor legitimate news about Biden family corruption, trash an economy, and lie about Trump’s standing with American voters through propaganda polls — now have a pretty good idea that election fraud is well within the realm of possibility. That would be true even if Democrats hadn’t spent much of the year working to ensure lowered scrutiny of mail-in ballots, which everyone knows are more susceptible to fraud than other ballots.

If it takes a few weeks for these 74 million voters and their elected representatives to see if they can learn anything about election integrity and whether this election had it, the people who put them through four years of claims about “illegitimacy” can go ahead and sit down and wait.

About the Author:
Mollie Ziegler Hemingway is a senior editor at The Federalist. She is Senior Journalism Fellow at Hillsdale College and a Fox News contributor. She is the co-author of Justice on Trial: The Kavanaugh Confirmation and the Future of the Supreme Court“. Follow her on Twitter at @mzhemingway