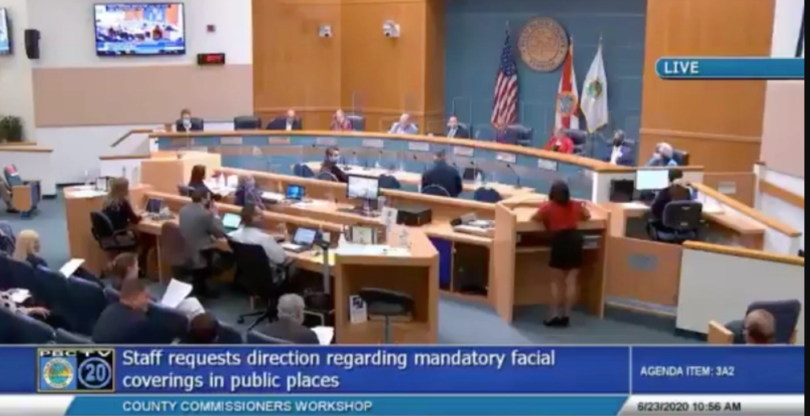 ‘You cannot escape God. Not even with the mask…’

Residents of Palm Beach County blasted commissioners’ decision to enact mandatory face mask rules, with many calling the measure an overstep of their authority.

At a Board of Commissioners meeting earlier this week, numerous residents challenged the compulsory face mask orders.

The woman went on to say the agenda behind having everyone obey face mask orders is to force compliance before a wider 5G system comes online and everyone’s health is tracked.

“Six feet, like I said before, is military protocol, you’re trying to get the people, to train them, so when the cameras, the 5G comes out, what? They’re going to scan everybody? We have to get scanned, we have to get temperatured [sic]? The kids have to go to school with masks?”

“Are you insane? Are you crazy?” she asked. “I think all of you should be in a psych ward right the heck now, because none of you, none of you know what the hell you are all talking about. This is insane.”

“And then you want to open this meeting with a prayer to God… Are you praying to the Devil? Because God is not listening to that prayer, because all of you are practicing the devil’s law.”

The irate woman went on to accuse members of the county commissioners’ court of working in league with vaccine pusher Bill Gates, Democrat presidential loser Hillary Clinton and the pro-pedophilia Deep State.