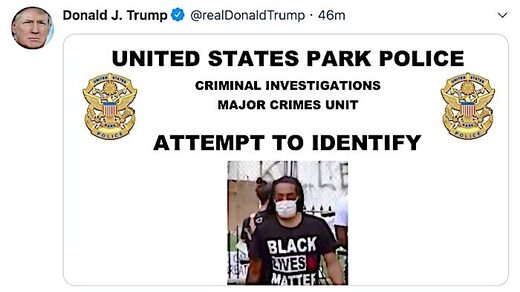 US President Donald Trump’s barrage of tweets about the FBI seeking to identify individuals suspected of vandalizing federal property has triggered a wave of criticism for unwarranted persecution of Black Lives Matter activists.

Back on Friday, the US president already shared an FBI poster with the pictures of the wanted individuals, yet on Saturday night he doubled down on his call to bring the suspected vandals to justice, tweeting out fifteen separate posters.

Even though Trump merely amplified a public call for information by the United States Park Police and the FBI – this time not even threatening 10-year prison sentences – his detractors immediately criticized the move as a dangerous encouragement of vigilantism.

Are we all ignoring the fact that Trump is sharing Wanted posters on Twitter, like his fanbase isn't going to try and attack anyone who looks like them?

On Friday, Trump signed what he called a “very strong” executive order, stating it would protect “monuments, memorials and statues,” as well as combat “recent criminal violence,” promising “long prison terms for these lawless acts.”

When Trump warned protesters against setting up a Seattle-style “autonomous zone” in Lafayette Park, outside the White House earlier this week, Twitter suppressed that post, saying it was “abusive” because it amounted to “a threat of harm against an identifiable group.” This time, however, Twitter remained silent, so far.

President @realDonaldTrump is tweeting out a bunch of “wanted” posters of (mostly black/brown) people who, at most, allegedly committed (or attempted) vandalism. He’s either going to get someone hurt/killed by vigilantes or get the USPP/FBI tip lines flooded w/ bad info, or both.

If anyone gets doxed by his little stunt we should make sure they have a GoFundMe set up immediately.

OMG….Snowflake. So putting up posters of criminals is harassment? I'm sure you're fine with the criminals tearing down the statues but Trump advertising to bring to find these criminals hurts your feelings for your liberal buddies