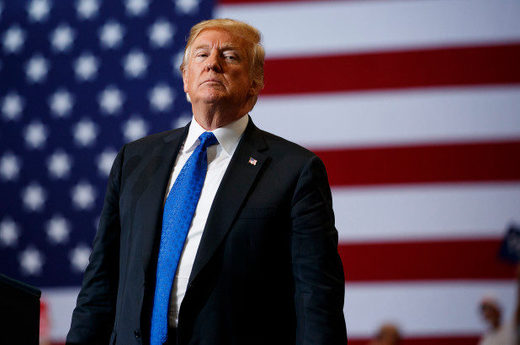 President Trump suggested at his campaign rally in Tulsa, Okla., on Saturday that legislation be proposed to require a minimum sentence of a year for anyone who burns the American flag.

“We ought to come up with legislation that if you burn the American flag you go to jail for one year,” Trump said, pointing to Oklahoma Republican Senators Jim Inhofe and James Lankford in the crowd.

“We oughta do it. We talk about freedom of speech… but that’s desecration.”

Burning the American flag is not illegal.

In the 1989 case Texas v. Johnson, the Supreme Court ruled in a 5-4 decision that the act of burning an American flag is constitutionally-protected free speech under the First Amendment.

The president has suggested similar legislation in the past. However, his idea has resurfaced recently after several demonstrators protesting the death of George Floyd were seen burning U.S. flags.

The death of Floyd, an unarmed Black man who died in Minneapolis police custody, has sparked massive protests across the country, including in front of the White House and throughout the nation’s capital.

During a conference call with governors earlier this month, Trump reportedly called the act a “disgrace” and pledged support for an “anti-flag burning” statute.

“We have a different court and I think that it’s time that we review that again. Because when I see flags being burned — they wanted to crawl up flag poles in Washington and try and burn flags but we stopped them,” the President told governors, according to audio of the call obtained by CNN.

“They’re weren’t able to do it. They would’ve done it if we didn’t stop them. I think it’s time to relook at that issue, hopefully the Supreme Court will accept that.”