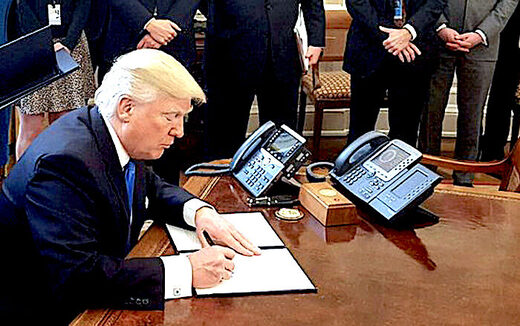 President Trump says it is “common sense” to reduce overall immigration to the United States while more than 30 million Americans are jobless and want full-time work.

“I think it’s going to make a lot of people very happy,” Trump said of his plan to expand his current executive order that halted new employment-based green cards from being issued to foreign workers.

The plan has overwhelming support from overall Americans and, specifically, from swing-state voters.

Trump said there will be “very little” exemptions in the expansion of the order, and hinted that he may take further action in the future to cut more immigration.

“Very little exclusion and they’re pretty tight,” Trump said. “And we may even go very tight for a period of time.”

As Breitbart News reported, Trump is expected to sign the expansion of the order within the next week. The expansion will halt new foreign workers arriving in the U.S. to take jobs on H-1B visas, H-2B visas, J-1 visas, and L-1 visas.

Extensive research by economists such as George Borjas and analyst Steven Camarota revealed that the country’s current mass legal immigration system burdens U.S. taxpayers and America’s working and middle class, while redistributing about $500 billion in wealth every year to major employers and newly arrived immigrants. Similarly, research has revealed how Americans’ wages are crushed by the country’s high immigration levels.

Every year, the U.S. admits about 1.2 million legal immigrants on green cards to permanently resettle in the country. In addition, another 1.4 million foreign workers are admitted every year to take American jobs. Often, Americans are fired and replaced by foreign visa workers. Many are forced to train their foreign replacements.