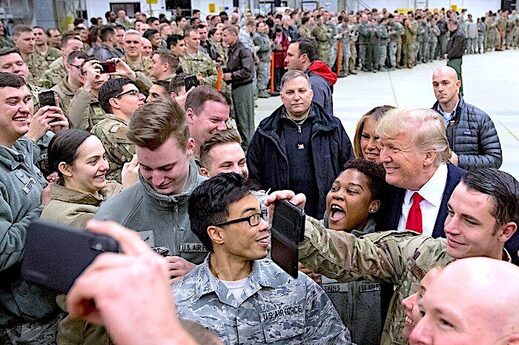 President Donald Trump confirmed Monday he is looking to cut the number of U.S. troops stationed at American military bases in Germany because of his lingering concerns that leaders of the European power aren’t spending enough on their own national defense.

Until now, White House officials had not publicly confirmed the rumored troops cuts, first reported by the Wall Street Journal earlier this month. In an impromptu press conference at the White House Monday afternoon, Trump said he intends to reduce the American military presence there because German officials are “delinquent in their payments” to NATO.

“They owe NATO billions and they know it,” Trump said. “Why should we be doing what we’re doing if they don’t pay?”

According to the Wall Street Journal, White House officials have already ordered (but not publicly disclosed) an end-strength reduction of about 9,500 troops from U.S. military bases in Germany in coming months.

The instruction would also cap American troop levels in the country at 25,000, creating a potential logistics problem for military leaders. U.S. bases there often serve as a stopover point for troops deploying to a host of worldwide locations, meaning end strength totals in the county can swell by thousands of troops from day-to-day.

A host of Republican and Democratic leaders in Congress have already criticized the plan, calling it short-sighted and potentially dangerous for American national security.

Trump administration officials for the last several years have been pushing Germany and other NATO allies to spend more on its military forces, the alliance’s stated goal of spending 2 percent of gross domestic product on defense. Germany has not yet agreed to that mark.

But critics of the president have noted that the goal of increasing defense budgets is not the same as counties owing money to NATO, and argued that the U.S. presence in Germany is as advantageous to American military strategy as it is to Germany defense planning.

White House officials did not release any further details of the plan, including when the draw downs may begin. Pentagon officials have not commented on the potential troop reductions.