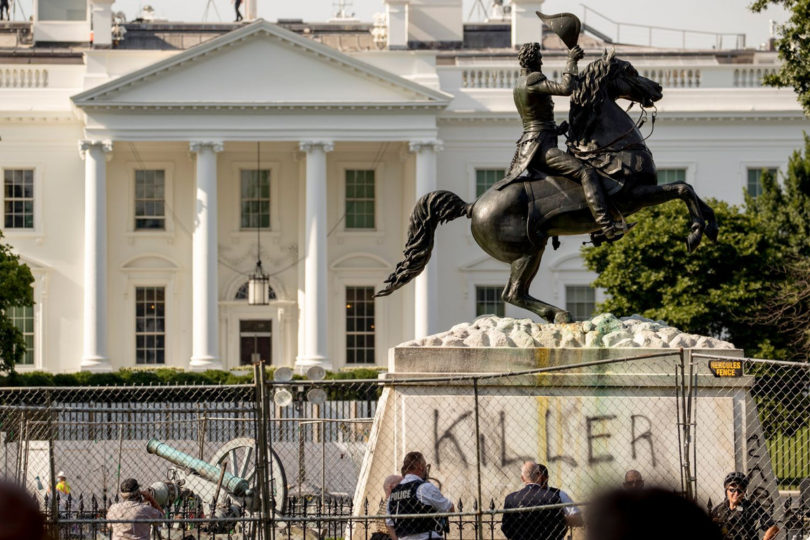 President Donald Trump on Thursday promised “retribution” against protesters nationwide who tore down statues and referred to Wisconsin demonstrators as “terrorists.”

“Every night, we’re going to get tougher and tougher,” Trump said at a Fox News town hall in Wisconsin on Thursday night, in response to an audience question about his plan to tamp down protests there. “And at some point, there’s going to be retribution because there has to be. These people are vandals, but they’re agitators, but they’re really — they’re terrorists, in a sense.”

It’s unclear what the president meant by “retribution,” but Trump earlier in the town hall called for prison time for protesters who tear down monuments. And in a Tuesday tweet, Trump promised 10 years in jail for “anyone who vandalizes or destroys any monument, statue or other such federal property,” citing the 2003 Veterans’ Memorial Preservation Act.

Protesters have toppled statues of Confederate generals, slaveholders and colonial figures in cities nationwide in the wake of massive protests against police brutality and racism. On Monday, demonstrators attempted to tear down a statue of former President Andrew Jackson outside the White House before law enforcement cleared the crowd.

“I can understand certain things being taken down, but they ought to go through a process legally,” Trump said Thursday.

In late May, Trump seemingly urged the shooting of looters in Minneapolis amid protests over the death of George Floyd. Trump has repeatedly called for “law and order” as protests continued throughout June.