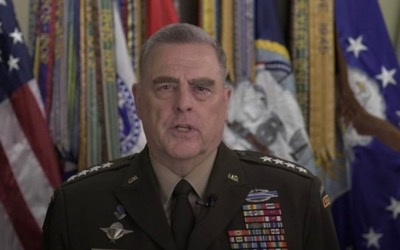 Two months ago we had envisioned the possibility that martial law might be declared to tackle the Covid-19 pandemic [1 ]. The European Union then slammed our article as pro-Russian propaganda [2]. However, the fact remains that a number of key military officers have recently come out of their reserve.

Defense Secretary Mark Esper has publicly distanced himself from President Donald Trump’s recent announcement to deploy the military to restore public order, which has been seriously disturbed by the violent protests in the wake of George Flyod’s tragic death.

Former Secretary of Defense General Jim Mattis gave an interview to The Atlantic last week along with the Chairman of the Chiefs of Staff, General Mike Milley. While the latter, as top-ranking military officer in service, failed to speak during the meeting, he nevertheless handed over an OpEd column to the monthly magazine pronouncing himself against the mobilization of the Armed Forces for the purpose of maintaining public order. His former boss explicitly denounced the divisive policy allegedly carried out by President Donald Trump.

During his 10 June 2020 appearance on the Comedy Central’s Daily Show, former US Vice President and Democratic Party presidential candidate Joe Biden reported having heard that US military officers were ready to remove Donald Trump manu militari if he loses the election.

In a Tweet on 11 June, President Trump thanked Archbishop Viganò for his letter in which he equated the organizers of the destabilization attempt, behind the pretext of the Covid-19 pandemic, with those fuelling the violent demonstrations following the death of George Floyd [3 ].

Chairman of the Chiefs of Staff General Mark Milley solemnly declared in a recorded message for a military graduation ceremony at Notre Dame University on 11 June that he regretted having gone with President Trump to Saint John Church while the crowd was being dispersed. He lamented having given a partisan image of the Armed Forces (photo).

[1 ] “Putchists in the Shadow of the Coronavirus”, by Thierry Meyssan, Translation Roger Lagassé, Voltaire Network, 31 March 2020.