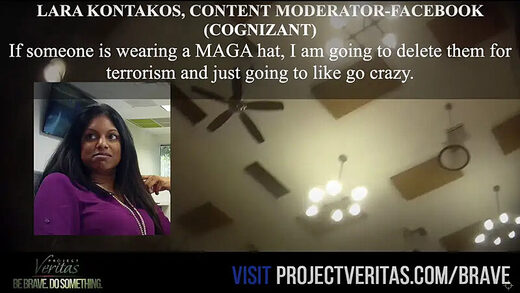 Facebook content moderator: ‘If someone is wearing a MAGA hat, I am going to delete them for terrorism’

“Zach McElroy’s story raises serious doubts about the Capitol Hill testimony of Facebook CEO Mark Zuckerberg, who gave lawmakers the impression that his company only takes content that could cause harm, such as relating to terrorism or hate speech, but never for politics,” said James O’Keefe, Project Veritas’ founding CEO.

“Facebook and other social media platforms are protected by Section 230 of the Communications Decency Act, because they claim that unlike traditional publishers that do not actively edit content — they say they are like the phone company just stringing wires on poles,” said O’Keefe.

“Facebook’s $400 billion market capitalization is tied to this protection and our report shows for the first time anywhere Facebook’s robust and human-directed process for restricting the marketplace of ideas, which calls into question their CDA 230 immunity,” he said.

In one example, McElroy captured as a screenshot, President Donald Trump posted on Facebook about Republican successes, including electing a GOP governor of Mississippi. In the screenshot, Trump’s account is labeled “Verified and Shielded,” but a seemingly innocuous comment on the post: “Cleaning up the house” with heart emojis is flagged in the Single Review Tool for adjudication.

One of the content moderators was asked if she deleted every Republican item that came up on her queue, she said: “Yes! I don’t give no f*cks, I’ll delete it.”

The same moderator said she does not take down anti-Trump content, even if it did not violate policy.

“You gotta take it down but I leave it up,” she said. “If you see something that’s not supposed to be up, it’s probably me.”

Another content moderator, Lara Kontakos, was asked what she did when she saw a posts supporting the president: “If someone is wearing a MAGA hat, I am going to delete them for terrorism.”

Then, Kontakos looked around at her colleagues: “I think we are all doing that.”

Steve Grimmett, a content review lead, said it was Facebook’s culture to target the president and his supporters. “It’s a very progressive company, who’s very anti-MAGA.”

Facebook CEO Mark Zuckerberg testified before Congress that Facebook is a politically neutral platform. However, the investigation report raises serious doubts about Zuckerberg’s Capitol Hill testimony, that gave lawmakers the impression that his company only takes down content that could cause harm, such as relating to terrorism or hate speech, but never for politics.

Social media platforms, like Facebook, are protected by Section 230 of the Communications Decency Act, because unlike traditional publishers they are not meant to actively edit content — claiming they are like a phone company just stringing wires on poles. Facebook’s $400 billion market capitalization is protected by CDA 230 immunity. However, today’s report shows Facebook’s robust and human-directed process for restricting the marketplace of ideas.

Zuckerberg told lawmakers that each example of conservatives being singled out and sanctioned were mistakes. At a combined Senate Judiciary and Commerce committee hearing on April 10, 2018, Sen. Ted Cruz (R.-Texas) addressed this:

In addition to that, Facebook has initially shut down the Chick-fil-A Appreciation Day page, has blocked a post of a Fox News reporter, has blocked over two dozen Catholic pages, and most recently blocked Trump supporters Diamond and Silk’s page, with 1.2 million Facebook followers, after determining their content and brand were, “unsafe to the community.”

To a great many Americans that appears to be a pervasive pattern of political bias. Do you agree with that assessment?

Zuckerberg: First, I understand where that concern is coming from, because Facebook in the tech industry are located in Silicon Valley, which is an extremely left-leaning place, and I — this is actually a concern that I have and that I try to root out in the company, is making sure that we do not have any bias in the work that we do, and I think it is a fair concern that people would at least wonder about.

The next day, Zuckerberg testified in front of the House Energy and Commerce Committee and Rep. Stephen J. Scalise (R.-La.), the GOP whip, asked the social media mogul if his company’s artificial intelligence program was unfair to conservatives.

Scalise: You can determine whether you want to write an algorithm to sort data, to compartmentalize data, but you can also put a bias in if that’s the directive. Was there a directive to put a bias in? And first, are you aware of this bias that many people have looked at and analyzed and seen?

Zuckerberg: There is absolutely no directive in any of the changes that we make to have a bias in anything that we do. To the contrary, our goal is to be a platform for all ideas.

Later, in the same hearing, Rep. Timothy L. Walberg (R.-Mich.) asked Zuckerberg if he could assure the congressman that Facebook did not restrict ads based on political views. Under oath, Zuckerberg gave that assurance.

Walberg: Can you assure me that ads and content are not being denied based on particular views?

Zuckerberg: Congressman, yes, politically. Although, I think what you — when I hear that, what I hear is, kind of, normal political speech. We certainly are not going to allow ads for terrorist content, for example, so we would be banning those views. But I think that that is something that we would all expect.