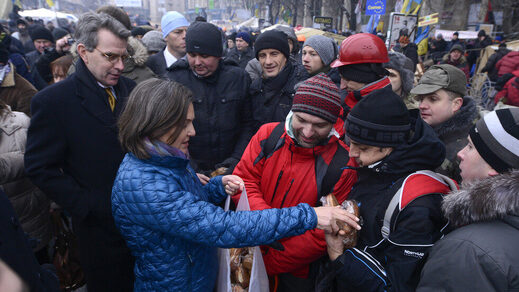 Victoria Nuland, the infamous State Department diplomat who “midwifed” Ukraine’s 2014 coup, has outlined a Russia strategy for the Biden administration. It is based on fantasies and projection, offering nothing of value to anyone.

You may remember ‘Tori’ Nuland from the so-called “revolution of dignity” in Ukraine, in particular the publicity stunt in which she doled out pastries to “peaceful protesters” on Kiev’s Independence Square. Standing next to her was US Ambassador Geoffrey Pyatt, who will be recorded some weeks later discussing with Nuland which protest leader will be allowed to form a government. Soon thereafter, the people they named led an armed coup against the government in Kiev and set up their own.

That was the zenith of her diplomatic career, however, as she resigned from the State Department after the inauguration of President Donald Trump and went into the private sector – currently working for Madeleine Albright‘s consultancy group in Washington. Now Nuland is making a comeback, with an article in the July-August edition of Foreign Affairs titled ‘Pinning Down Putin.’

Between re-airing the usual mainstream Washington accusations against Russia and projecting US and NATO wrongdoing on Moscow, Nuland is basically outlining a policy for the Biden administration, should Democrats capture the White House this November as the US establishment hopes. Bear in mind as you read on that Nuland isn’t necessarily partisan – she worked for Bill Clinton’s Russia guru Strobe Talbott as well as George W. Bush’s grey eminence Dick Cheney. If there is an embodiment of the bipartisan US establishment consensus on Russia, that’s her. That’s the main reason her essay is worth a look.

Her actual policy advice is trite and predictable, calling for “consistent US leadership at the presidential level, unity with democratic allies and partners, and a shared resolve to deter and roll back dangerous behavior by the Kremlin.”

According to Nuland, President Vladimir Putin has “cut off his population from the outside world” and the US needs to “speak directly to the Russian people about the benefits of working together and the price they have paid for Putin’s hard turn away from liberalism.”

Far from being “cut off” though, Russians have greater access to news and opinion than your average American – including news and opinions Nuland disagrees with, which is obviously the problem here. Someone is clearly salty that Putin has made it more difficult for US-backed “civil society” activists and NGOs to operate in Russia.

Nuland argues that US and NATO have “tried to persuade Moscow that NATO was a purely defensive alliance that posed no threat to Russia” but then has the gall to invoke the “independence” of Kosovo as an example of a “democratic struggle” and talks about how “a belt of increasingly democratic, prosperous states around Russia would pose a challenge” to Putin’s leadership!

Yet Kosovo is proof positive of NATO’s perfidy, and it was the 1999 war there that “lost” Russia, which had previously uncritically looked up to the West – something Nuland hopes to replicate. If she believes places like Ukraine or Georgia are either democratic or prosperous, she’s clearly delusional. Note that Washington praised Putin’s “democratic” predecessor Boris Yeltsin when he sent tanks to bomb the parliament in 1993. US allies like Poland and Hungary are being denounced by the EU as “undemocratic” these days. Perhaps “democracy” means only US-backed parties are allowed to win, along the lines of what happened in Serbia after the 2000 color revolution?

No less delusional are Nuland’s expectations. She describes matters in terms of “the carrot and the stick,” as if Russia were a donkey. Even if we get over the offensive metaphor, her “carrot” is patently ridiculous: Joint investments? Free trade? Lower tariffs? Energy partnerships? A toothless and pointless “pan-European security dialogue” proposed 12 years ago? Meanwhile, Russia would have to “demonstrate its commitment to ending its attacks on democracies” – in other words, prove a negative. Quite a bargain!

What Nuland really wants is to get around the Russian government and win the hearts and minds of the people, using the academia, “civil society” activists and students. She even proposes visa-free travel for Russians “between the ages of 16 and 22, allowing them to form their own opinions before their life paths are set.” Because the kind of graduates that come from US college campuses these days are really an example for the whole world to aspire to!

Nuland was a Sovietologist, so it’s not a surprise her proposals are still stuck in the Cold War mindset. But the 1980s propaganda was based on American opulence, prosperity and Reagan-era confidence. Soviets who bought into it ended up with what Nuland herself recognizes as the “years of chaos and impoverishment during the 1990s.” Putin is the product of that disillusionment, and while one may argue things might have been better this way or that, there is zero argument that his rule hasn’t been vastly preferable over the 1990s to everyone – except the oligarchs and the activists on the payroll of the National Endowment for Democracy.

What does the US offer now, though? Russians look at the scenes from American television, and see a remake of the Chinese Cultural Revolution. They see race riots and self-proclaimed Communists calling for a revolt. They see “science” that says one thing one day and something completely different the other, based solely on political considerations. They see the destruction of monuments and renunciation of the nation’s history and heritage.

Can one blame them if all of this reminds them of Russia’s own past from 1917 onward? As the very American expression goes, “been there, done that.” Also, “no thanks.”

Nebojsa Malic is a Serbian-American journalist, blogger and translator, who wrote a regular column for Antiwar.com from 2000 to 2015, and is now senior writer at RT. Follow him on Twitter @NebojsaMalic