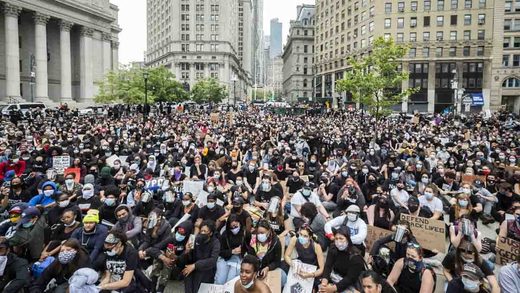 It was the biggest news story and most consequential policy decision of our lifetime. The lockdowns destroyed potentially 53% of our GDP, paralyzed our health care system, shut down our education system, and induced a physical and mental health crisis along with a social, economic, and labor catastrophe that we still can’t begin to conceptualize. Yet we were told it was absolutely necessary for our survival because of the most dangerous virus ever that required these actions to some degree until there is a vaccine or a cure. Well, it appears that we found a cure, though not a medical one.

From day one, the coronavirus response was a display of the tail wagging the dog – the media driving the scientific and medical community, not the other way around. This is why the minute the media found a more exciting narrative to advance their agenda, namely racial strife, not only is the virus is out of the news entirely, but the cult-like devotion to quarantine, wearing masks, and the mind-numbing trope of “social distancing” has been repudiated within hours of the first sacred “protesters” smashing and burning storefronts in Minneapolis last week.

Even the media figures who tacitly condemn the violence and the local officials who take some action against the most violent rioters have all elevated the “protesters” to sainthood status. They have allowed them to break curfews and gather in the thousands on top of each other. Politicians have even joined in with them, and there have been group hugging and kneeling sessions with the police.

This is the mayor who shut down my synagogue for 3 months. I hope my rabbi sees this. We were conned. pic.twitter.com/Of25pALXM7

Stunning scene in downtown D.C. as the sun begins to set. Thousands are lying on the hot pavement in extreme heat and humidity — baking underneath their masks — almost a week into the protests.

FULL ON CONCERT!!! He just sang “Lean On Me” and the entire crowd had their lights up and was singing along. The focus is no longer on the cops and is on the community now. This is PEACEFUL!! #washingtondcprotest #blacklivesmatter @wusa9 @DMVBlackLives @PoPville pic.twitter.com/WepCzq544B

To this day schools are closed and businesses are driving themselves crazy trying to comply with nearly impossible restrictions. Weddings are still canceled in many of these cities, and funerals for loved ones are still extremely limited and, for a while, were only being conducted graveside in some states. We are walking in the heat with masks to stores because we were told if we don’t do all this, there will be a massive second wave and we will all die. Most of these cities were still under phase one of the shelter-in-place order, and every state still banned large gatherings.

PA Health Sec. won’t allow the state to reopen or people to gather – and the Gov. who said businesses that disobey are cowards as he marches in protests himself – actually tries to legitimize limitless protests in the street while standing by restrictions. pic.twitter.com/4jKwJGBtpG

Yet somehow, when you have thousands of protesters on top of each other in every major city or gathering in a church in D.C. to set it on fire rather than pray in it, there is no longer a concern of mass spread of this super-deadly pandemic of the millennium?

Obviously, the question answers itself. The media giveth, and the media taketh away. It was clear all along that this virus had spread much farther, much quicker, and for much longer than they admitted, making it much less deadly but also less prone to any meaningful mitigation while it was running its course. At the same time, once it ran its course, it was likely over, thanks to inherent and cross-immunity beyond the 10%-20% of the population that it hits. The media shut down those who tried to make this case, so long as this was their issue of the day through which to promote anarchy and tyranny. Now that they have moved on to bigger and better things, the truth of the most devastating policy decision of all time comes out.

In that vein, let’s catch up on some of the virus news you might have missed in recent days since the magical cure was discovered: