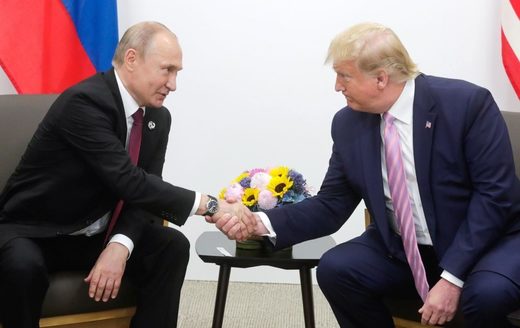 The media ignored only the second joint US-Russia statement in four years, to talk about silly hair and small hands.

“April 25, 2020, marks the 75th Anniversary of the historic meeting between American and Soviet troops, who shook hands on the damaged bridge over the Elbe River. This event heralded the decisive defeat of the Nazi Regime.”

Thus reads the first paragraph of a joint statement by President Donald J. Trump and his Russian counterpart Vladimir Putin.

This statement correctly is called “rare” by two of the very few mainstream media articles addressing it. Props to Reuters and the New York Post for this one.

The only other time the US and Russia issued a joint statement or declaration was when Putin and Trump met in Helsinki back in July 2018.

Googling the press release using “trump putin joint statement” one would expect the page to be full of huge news corporation results but that’s not the case. Apart from Reuters and the New York Post, you’ll find a bunch of Australian sites and a Chinese one who cover it without much ado. [Google results widely differ geographically. I ran them from Belgium.]

Mainstream Bias For All To See

Some others like The Hill, MarketWatch, The Week and Forbes apparently find ominous reasons for concern.

They all cite the Wall Street Journal as the source for the unease.

For the WSJ, issuing the statement in and by itself is considered “a move” by the Russians and it immediately follows its article with a link to a 2017 article on the same site about how the Pentagon and the State Department “have complained about Russia’s behaviour“.

Why hark back to 2017, I wonder; these two organisations consistently address Russia’s stance in the wider world quite negatively and could easily find more recent analyses in the same vein.

Apart from the often cited “anonymous sources” on whose claims complete fabrications are often built, WSJ also refers to a certain Angela Stent, author of books like The Limits of Partnership: US-Russian Relations in the 21st Century, in which her anti-Russian bias is “apparent” while “inconvenient history is not mentioned”.

Let’s compare this muted response to the first joint statement by the leaders of the two nuclear superpowers to the disinfectant concoction prevalent on mainstream news ever since Friday.

Using the Google query “+Trump +disinfectant site:guardian.com” which indicates that the results need to have both “Trump” and “disinfectant” in its article, we find — at the time of writing — more than 4.000 pages retrievable on The Guardian alone. Measure that number against a “+Trump +Putin +Elbe +Statement site:theguardian.com” query which yields only 8 results. All but one of those eight date from 2017, the one exception being from 2015.

In other words, the beacon of British “quality journalism” in the eyes of many fails to even report on what is a “rare joint statement” at all.

The Extreme Bias Right Before You

Maintaining social distancing here in Antwerp, we still are allowed outside and can talk to others. The public’s reaction to the disinfectant-story insanity is telling: “what a fool Trump is”, “he should inject it himself” then “we’d finally be rid of that fool”; “it goes to show how stupid and what a selfish asshole he really is” and so on. What is worrying to me, is that such media sensationalism leads to too much polarisation.

Mainstream press, apparently, did its due with The Guardian apparently thinking that “Trump’s coronavirus disinfectant comments could be the tipping point”.

The public at large was given yet another reason to despise no. 45 although Trump is the first president since before WWII who did not start any foreign intervention — as he promised in his 2016 election campaign. For comparison: Nobel Peace prize winner Obama started seven wars, while the other winner Carter started four. Even JFK did the same! Not to mention the Bushes and Reagan.

Yet here we have a president who is vilified by the general “enlightened” public (as Guardian readers generally believe themselves to be) because of some of the following media stories. I’ll state the number of page hits again:

What I am getting at is this: isn’t it remarkable that incredibly banal topics as well as flat out lies and/or misinterpretations get a lot more coverage than a “rare joint statement” by the US and Russia that carries a message of hope and cooperation, no less?

I think it is and it shows not only how amazingly biased mainstream news really is about both presidents but also how easily the public at large are led astray in forming their opinions based on these “reputable” sources’ flat out propagandistic coverage.

Joris De Draeck is an independent journalist, creator of Planet News and contributor to Fort Russ News, SOTT and Global Research. He focuses on major international conflicts. You can follow him on Twitter @DeDraeck.