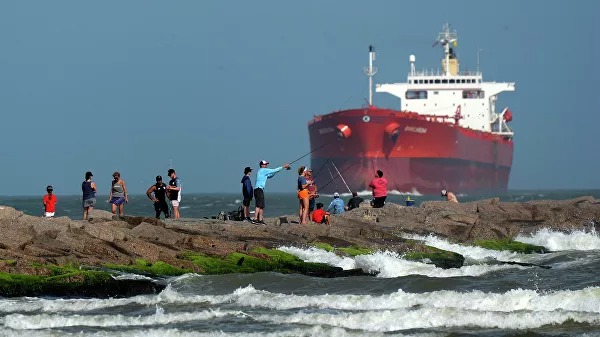 In June US refineries will receive about 9 million barrels of Russian oil – twice as much as in March. The material of RIA Novosti covers why the United States, even in the face of a market overstocking, cannot do without supplies from Russia.

According to the Marinetraffic and Vesselfinder navigation websites, ten tankers with Russian oil are now approaching the shores of America: 8 from Ust-Luga and 2 from Novorossiysk.

All of them belong to the Aframax class and take on board up to 900,000 barrels. Thus, by the end of the month, the United States will receive up to 9 million barrels of our Urals – a nine-year record.

Recall that the largest American refineries cannot operate on light oil produced in west Texas and shale fields. These enterprises are designed for sulfur grades, so light oil must be mixed with heavy oil, which was previously purchased in Venezuela.

But last January Donald Trump imposed sanctions on Caracas. As a result, Venezuelan oil exports decreased by 32% to 1.001 million barrels per day. China acquires the lion’s share of this volume, and the prospect of a shutdown looms ahead of the Gulf of Mexico and east coast refineries due to a shortage of raw materials.

To avoid disaster, the Americans switched to our Urals. Last autumn, Russia even became the second after Canada to export energy to the US, beating Mexico and Saudi Arabia.

Where it came from is unexpected

Experts note that the United States took advantage of the April drop in oil prices, when Urals quotes sank to $12 per barrel, to sharply increase purchases. However, Russia also benefits.

After the failure of the March OPEC+ meeting, Saudi Arabia decided to “punish Moscow for intransigence”, filling the markets with cheap oil. Riyadh moved to a “maximum production policy”: the government instructed Saudi Aramco to increase exports by a third, from 9.7 to 12.3 million barrels per day.

At the same time, the Saudis harshly flooded the European market, trying to undermine Russia’s position: they offered raw materials $10.25 below Brent stock exchange quotes. The result, in addition to the collapse of oil quotes, was an overflow of oil storage facilities around the world.

At the end of March, traders could not find buyers for Russian oil in Europe even at record low prices. The prospect of overflowing oil storage facilities and stopping wells became quite real in Russia.

The Americans helped our oil workers to survive the most acute period of the price war unleashed by the Saudis. It was not necessary to stop the wells. Moreover, thanks to a jump in demand by the end of April, Urals in world markets was quoted at a higher price than Brent for the first time in many years.

As a result, Russia emerged from the oil war with the least losses. The main thing was to avoid the shutdown of wells, while in the same US, according to Baker Hughes, the number of operating oil rigs since the beginning of the year decreased by almost 70%: from 677 to 206 (according to June 5th). This is the lowest since the global crisis of 2008-2009.

As for the Saudis, they had to pay for the flooding with huge losses. “We are experiencing a serious crisis that we have never seen in modern history,” admitted Mohammed Al-Jadaan, Minister of Finance of the Kingdom, in May. “Problems in the oil market have led to a reduction in revenues and such pressure on public finances that it is difficult to cope without compromising macroeconomics in the medium and long term.”

The Saudi Ministry of Finance launched from June 1st a program to optimise state finances for almost $30 billion. They canceled the payment of the subsistence minimum to the poor and increased VAT threefold – from 5% to 15%.

According to experts, in July the demand for Russian oil will continue to grow. Firstly, OPEC+ participants extended the current restrictions on production until August, which in most countries is ensured mainly by heavy, less valuable, grades of oil.

Secondly, since quarantine is canceled, the demand for diesel grows faster than for gasoline. And heavy grades give more diesel fuel.

Meanwhile, Urals quotes this week exceeded $42.4 per barrel and reached the level budgeted for in the federal budget for this year. I.e., Russia is already making up for lost time due to the oil war, unlike its main competitors.