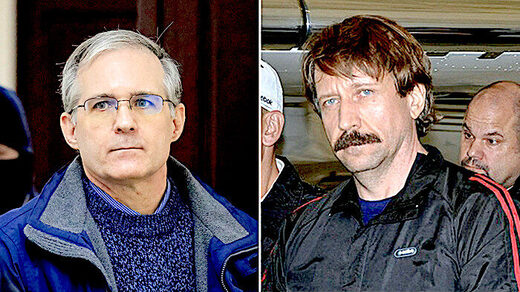 Two days after he was convicted on spying charges and sentenced to 16 years in prison, Moscow news agency Interfax reports that Paul Whelan may be traded for two Russians jailed in the US. It cites “an informed source.”

The pair of Russians concerned are weapons dealer Victor Bout – serving 25 years – and pilot Konstantin Yaroshenko, who received a 20-year term. Interfax says it would be managed through presidential pardons.

“Washington and Moscow are discussing various options, but the final decision has not yet been made. “Whelan’s exchange is being discussed for two Russians at once – Bout and Yaroshenko.”

If the report proves true, there is a significant imbalance. Bout is considered a heavyweight prisoner, whereas Whelan, and the US authorities, have insisted he was only in Moscow to attend a wedding. Whelan has described himself as “more like Mr Bean, than James Bond.”

Bout was sentenced to 25 years in prison in 2011 for conspiring to sell a large batch of weapons to the left-wing Colombian group FARC. The same year, Pilot Konstantin Yaroshenko was handed a 20-year jail term on drug-dealing charges that Russia says were trumped up.

The US Embassy in Moscow told Interfax it could not add anything to Monday’s statement by Ambassador John Sullivan. He said that the US was “not looking for exchanges, but justice for Paul.”

Whelan’s lawyer Vladimir Zherebenkov said, the same day, that he was confident his client would be exchanged. On Tuesday, Whelan’s brother David accused Russia of “hostage diplomacy.” He added that “Paul has been convicted as a spy now. Nobody believes he’s a spy, I don’t think even the Russians believe he is a spy,”

The former US-Marine was detained in Moscow on December 28, 2018 and accused of receiving a flash drive with state secrets. The American protested that he was expecting to take delivery of photos from a previous trip, and that he was in Moscow to attend a wedding.