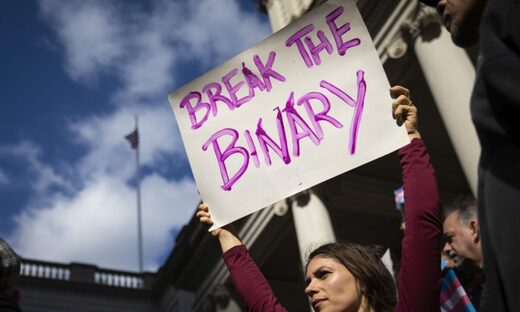 Amid the recent clamour to denounce JK Rowling for her sacrilegious utterance of the word ‘woman’ came some good news. A slipped-out government announcement revealed – at long last – some badly needed pushback to the demands of transgender activists. In a paper due to be published at the end of July, the government is expected to drop plans to allow transgender people to change their birth certificates without a medical diagnosis and to put in place new protections to safeguard female-only spaces such as refuges and prisons.

This is not before time. The drawn-out conflict between defenders of sex-based rights and believers in gender self-identification has benefitted no one. And, let’s not forget, this was a conflict largely prompted by a Conservative government. It was back in 2018, on Theresa May‘s watch, that the consultation to the Gender Recognition Act (2004) was launched, paving the way for gender self-identification and calling into question once taken for granted assumptions about biology, sex and what it means to be a woman.

But to understand how institutions such as the police, prisons, schools and medical services became so transfixed by the ideology of transgenderism that they were prepared to jettison the safeguarding of children and turn back the clock on women’s hard-won rights, we have to look beyond government announcements and consultations. We need to ask how, in little more than two decades, ‘transgender’ morphed from a term representing individuals, and little used outside of specialist communities, to one signifying a powerful political ideology driving significant social change.

We need to ask how children – often girls with autism or suffering with mental-health problems – could so easily find themselves heading down a path leading to surgery. We need to ask why teenage girls were expected to get changed for PE or try on clothes in shops alongside boys. We need to ask why incarcerated women could be sexually assaulted by male inmates and why women escaping domestic violence could end up in a shelter with men. In a new book, The Corrosive Impact of Transgender Ideology, published by Civitas and out today, I explore how so many people in positions of power within the realms of media, education, academia, police, social work, medicine, law, and local and national government were prepared to coalesce behind the demands of a tiny group of transgender activists.

In part, this political and policy success was down to strategies consciously adopted by key figures within the transgender movement. Deliberate efforts were made to align campaigns for transgender rights with pre-existing gay-rights groups – adding the ‘T’ to the LGB movement. Significantly, this allowed access to already established networks and funding at a time when, with the legalisation of same-sex marriage, gay rights had largely been achieved. When it came to advocating for changes to the Gender Recognition Act, transgender activists were in a position to set out the key issue – self-identification – before feminist groups were fully aware of what was at stake. Indeed, transgender activists deliberately targeted certain women’s groups to gain acceptance for their view that gender was entirely based in the brain.

One masterstroke by transgender activists was the refusal to debate. Any attempt at rational discussion, any recognition that there may be competing rights at stake, was met by accusations of calling into question the right of transgender people to exist. Another, even more shameful ploy was hiding an adult agenda behind concern for the plight of children. For activists in the transgender movement, the existence and increasing visibility of transgender children provided evidence for their claims that transgender people are ‘born that way’ and that identifying with a different gender to your anatomical sex is an intrinsic part of a person’s psyche. The beatification of transgender children as vulnerable but brave and politically progressive, rubbed off on their defenders. This, in turn, provided transgender adults with a layer of protection from criticism and questioning and legitimised demands being made of educators, health professionals and policymakers.

But the actions taken by a small number of transgender activists, no matter how shrewd or calculating, are not sufficient to explain the widespread reshaping of social institutions and cultural conventions that has taken place in recent years. None of this could have happened without a readiness from people outside of the transgender community and in positions of authority not only to accept having their language and policies policed but to go further and play a role in affirming the gender ideology promoted by campaigners and, in the process, enforcing speech and behaviour codes.

The reasons for this acquiescence lie in our broader political climate, in particular the rise of identity politics and the emergence of a culture of victimhood. Transgender people are exploited as the living embodiment of challenge to a seemingly outdated, binary, heteronormative order. Advocating on behalf of the ‘transgender community’ allows others to be associated with this identity-driven challenge to convention. It provides institutions with a sense of purpose and legitimacy for action that comes with the ready-made moral authority of protecting the oppressed.

The current government’s decision to back down on proposed changes to the Gender Recognition Act will come as a relief to many. But the grip transgender ideology has on our culture and institutions remains. For instance, a school in West Sussex recently dropped plans to name one of its houses after JK Rowling following her tweets in defence of women. This is a shameful message to send to children. Rowling should be a role model for her life story, her achievements and her strength of character in standing up to social-media bullies.

National policy change is a small step in the right direction. But if we really want to challenge the corrosive impact of the transgender ideology we need to win a bigger social, cultural and political argument. We need to understand how transgenderism was able to gain such a tight grip on our institutions so that we do not end up in this position once more.

Joanna Williams is director of the Freedom, Democracy and Victimhood Project at Civitas The Corrosive Impact of Transgender Ideology is free to download.