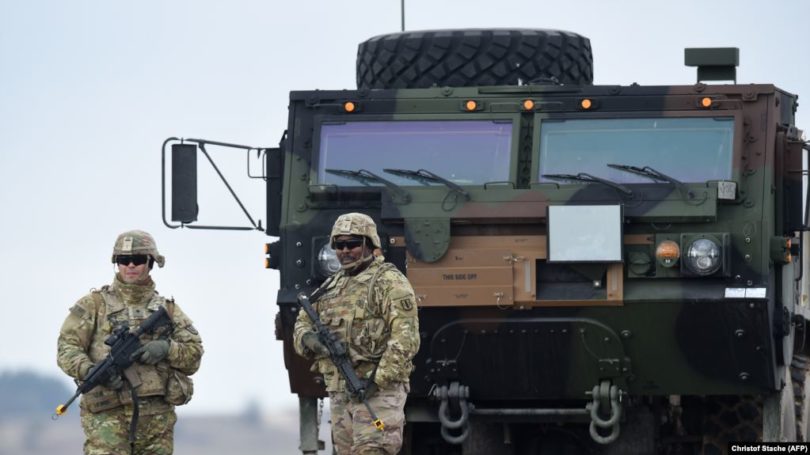 The German government says it has received formal notification of a possible partial withdrawal of U.S. troops stationed in the country, a move that some worry sends the wrong signal to Russia and damages NATO security.

The June 10 announcement follows media reports that U.S. President Donald Trump had ordered the withdrawal of up to 15,000 of the approximately 34,500 U.S. soldiers stationed in Germany.

Both the White House and NATO have declined to comment on the media reports.

“The federal government has been informed that there are considerations in the U.S. administration to reduce the presence of the U.S. armed forces in Germany,” Chancellor Angela Merkel’s spokeswoman Ulrike Demmer told journalists in Berlin.

“As far as we know, there has been no final decision,” she added.

Some U.S. lawmakers have warned that if implemented, the reported plan would damage U.S. national security and strengthen Russia’s position in Europe.

The Wall Street Journal reported last week that Trump planned to move forward with the withdrawal of up to 9,500 U.S. personnel, while the German news magazine Der Spiegel said between 5,000 and 15,000 could be withdrawn later this year.

Earlier this week, German Defense Minister Annegret Kramp-Karrenbauer, who is also the leader of Merkel’s Christian Democrats (CDU), suggested that if the United States goes ahead, it would do more harm to NATO as a whole than to Germany’s own defense.

“I don’t want to speculate on something for which I have no confirmation,” she told a news conference on June 8. “The fact is the presence of U.S. troops in Germany serves the entire security of the NATO alliance — so American security too. That is the basis on which we work together.”

Germany hosts more U.S. troops than any other country in Europe.

But transatlantic ties have become strained under Trump, who has repeatedly criticized Germany and other European countries for not fulfilling their NATO commitment to spend 2 percent of economic output on their militaries.

Berlin has pledged to increase military spending, but meeting the NATO target would likely not happen before 2030.

In an open letter dated June 9, 22 Republican members of the U.S. House Armed Services Committee said they were “very concerned about reports that the Administration is considering a significant reduction of U.S. troops currently based in Europe as well as a cap on the total number of U.S. troops which can be present there at any one time.”

“Such steps would significantly damage U.S. national security as well as strengthen the position of Russia to our detriment,” the lawmakers wrote, adding: “In Europe, the threats posed by Russia have not lessened, and we believe that signs of a weakened U.S. commitment to NATO will encourage further Russian aggression and opportunism.”