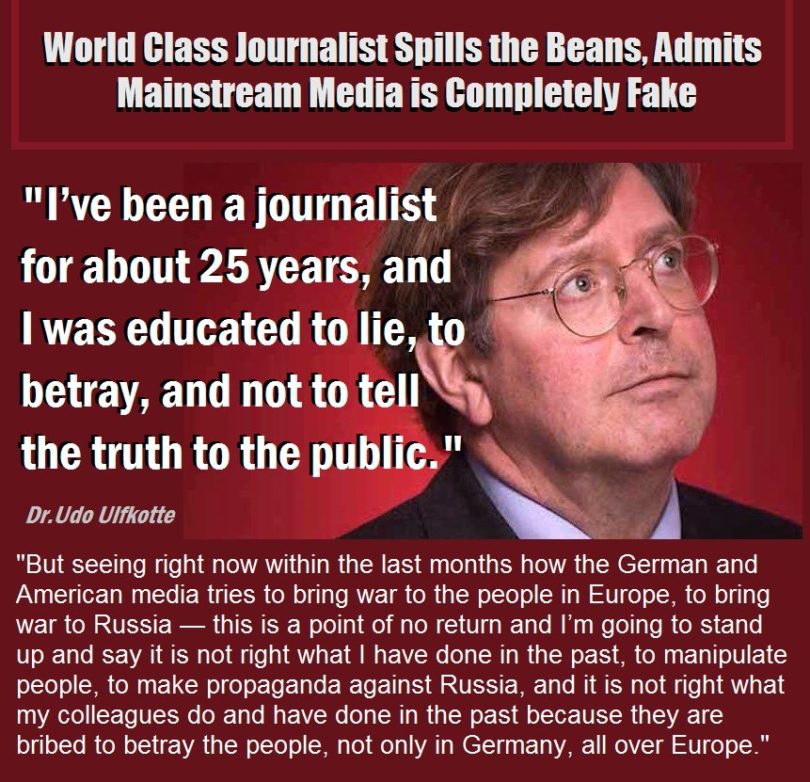 The two go hand-in-hand, of course. When several years ago the late Udo Ulfkotte published his revelations about the inner workings of the corrupt Western media (ostensibly printed in English by a minor publisher in 2017 but “unavailable” ever since, followed soon thereafter by convenient death by heart attack of the apparently healthy 57-year old German author) who would have suspected that in the fabled West identical processes were corroding other important areas of public life?

Just as a reminder, as the publisher points out in its blurb, “Dr. Udo Ulfkotte, a former editor for the German main daily newspaper, Frankfurter Allgemeine Zeitung (FAZ), has first-hand knowledge of how the CIA and German Intelligence (BND) bribe journalists to write articles free of truth and with a decidedly pro-Western, pro-NATO bent or, in other words, propaganda. In his bestselling book Bought Journalists (“Gekaufte Journalisten”), Dr. Ulfkotte explains in great detail the workings of the U.S. and NATO s propaganda campaign and how a lack of compliance with it, on the part of a journalist, can cost a career.”

The ongoing Coronavirus pandemic, whatever one may think of it, has exposed a situation in Western science that is ominously analogous to what Ulfkotte had described in what passes as its “journalism”.

One of quite a few (but never enough) scientists in the U.S. with integrity to resist the intense career-costing pressure to distort scientific data and conform it to the marketing requirements of huge pharmaceutical concerns is renowned microbiologist Dr. Judy Mikovits. Dr. Mikovits played a leading role in HIV research in the 80s and was fulsomely praised at the time for her contribution to suppressing that epidemic. But her stellar scientific credentials notwithstanding, she quickly became persona non grata for the gekaufte scientific establishment once she started to question some of the sacrosanct verities of the current Corona commotion. “The hammer began to fall,” she explains, “and I was told to deny the data, to misrepresent the data, to throw the data away, and when I refused to do so I was fired. My lab was locked down on September 29 [2019] and my two offices and my entire 30-year career and everything, my notebooks, was confiscated.”

The symbiosis of “Big Science,” “Big Pharma,” and their executive committee (unfortunately the Leninist expression does work best here), also known as “the government,” manifested itself vividly in the Neil Ferguson Oxford College fiasco, using a rigged mathematical model and disregarding hard data to conjure up a phantasmagorical pandemic disaster scenario which subsequently resulted in a genuine economic, social, and for hapless millions personal, disaster of incalculable magnitude. In a shameless puff piece devoted to the quack Ferguson, he was praised by Business Insider for having “modeled the spread of all those outbreaks, advising five UK prime ministers in the process. But all that seems like a practice run for 2020.” Indeed, it was, as we are finding out. Left unmentioned, of course, was the appalling track record of Ferguson’s infelicitous consultations, all his predictions in previous epidemics (as well as the current one) having proven flat out wrong every single time. In the end, hemmed in by irrefutable facts, Ferguson was obliged to admit, with the “greatest respect” for Swedish scientists, that Sweden had managed to suppress the Corona virus without resorting to tough restrictions, and he even had the effrontery to add – after the damage caused by his recommendations had turned irreversible – that Sweden had used “the same science as the UK” to achieve a successful public health result at a far lower social cost. But as Ferguson’s like-minded friend George Soros, unequivocally and with amazing frankness, recently put it, “even before the pandemic hit, I realized that we were in a revolutionary moment where what would be impossible or even inconceivable in normal times had become not only possible, but probably absolutely necessary.” The agenda indeed must be advanced at any cost, and as another person from the same unsavoury circle observed not long ago, “you never want a serious crisis to go to waste.”

So now we come to one of the gekaufte Wissenschaft sources of the current global hysteria, as unexpectedly revealed by a most unlikely journalistic authority, The Guardian: “A Guardian investigation can reveal the U.S.-based company Surgisphere, whose handful of employees appear to include a science fiction writer and an adult-content model, has provided data for multiple studies on Covid-19 co-authored by its chief executive, but has so far failed to adequately explain its data or methodology.”

It turns out that this obscure outfit’s impact on the policies and practices of governments and international organizations has been nothing short of spectacular: “Data it claims to have legitimately obtained from more than a thousand hospitals worldwide formed the basis of scientific articles that have led to changes in Covid-19 treatment policies in Latin American countries. It was also behind a decision by the WHO and research institutes around the world to halt trials of the controversial drug hydroxychloroquine. On Wednesday, the WHO announced those trials would now resume.” In other words, what The Guardian uncovered within the Western scientific and governmental nexus was a huge, utterly discreditable case of fraud.

But it was not fraud just in the abstract sense of the word. It had tangible consequences in the real world, affecting directly the life and health of countless human beings.

As when, on May 22, 2020, and entirely based on the “scientific” findings put forward by Surgisphere Corporation, Britain’s prestigious medical journal The Lancet published “Hydroxychloroquine or Chloroquine With or Without A Macrolide For Treatment of COVID-19: a Multinational Registry Analysis”.  It was described (and later the article was mercifully retracted) as an observational study purportedly involving more than 96,000 hospitalized Covid-19 patients in 671 hospitals across six continents. What was not disclosed is the fact that the two lead co-authors have significant, relevant financial conflicts of interest that just may have biased the reported findings.

As if on cue, within days of Lancet’s publication of these bogus data, Dr. Anthony Fauci, head of the National Institute of Allergy and Infectious Diseases (NIAID), referring to HCQ, declared on CNN “The scientific data is really quite evident now about the lack of efficacy.” A media blitz against hydroxychloroquine (HCQ) created a panic: clinical trials aimed at testing hydroxychloroquin for COVID-19 were suspended by international public health institutions, including the World Health Organization, the UK government regulatory agency, and the French government. As Stephen Smith, a U.S. doctor with professional integrity, has pointed out “COVID-19 Patients Died Because of Bogus Lancet Study that Disparaged Hydroxycholorquine.”

It all makes solid financial sense, of course. Hydroxychloroquin is a dirt cheap, widely available remedy the proceeds from which would not fill anybody’s coffers and which would not lend itself to any of the further “crisis exploitation” agendas Messrs. Soros, Gates, Ferguson et al. might have in mind. The threatened globally injected vaccine in the making, however, meets all their sinister requirements, and it offers the prospect of virtually limitless juicy profits to boot. Case closed.

But that is just one of the things that happens when nations and their gekaufte governments allow rascals and charlatans to bamboozle them.