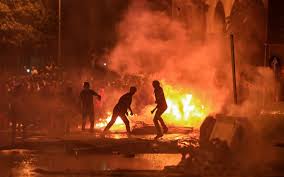 “We are a nation of communities… a brilliant diversity spread like stars, like a thousand points of light in a broad and peaceful sky. We have become not a melting pot but a beautiful mosaic. Different people, different beliefs, different yearnings, different hopes, different dreams.” Thus said former US President G H W Bush, waxing lyrical on the joys of diversity.

“A car tried to ram a gang of approximately 100 Chechens armed with pipes, knives and other weapons. It failed and then flipped over.” The would-be rammer then had summary justice applied. “However after being outnumbered for a few days, and being chased around and beaten by Chechens, the Arab gangs brought in assault rifles and are now posting videos and photos on Twitter, calling for the Chechens to leave town.” But…but…diversity? What about the beautiful mosaic? It appears that the African ‘communities’ that run the city’s drug trade are concerned at this unwelcome exposure.

And, Covid or no Covid, the brilliant diversity continues to spread like stars (do stars spread?) as the mud-slide envelopes the whole country. Same thing way up north in demographically vulnerable Iceland (population a mere 300,000) as they welcome a steady stream of invaders new citizens, all Muslim and/or African. The birth rate for Icelandic women is well below replacement levels but the new arrivals, like Hassan and his seven children, will see to that. And presumably this guy  – whose ambition is to have no fewer than twelve children – has been busy since I wrote about him nearly ten years ago.
Aristotle saw it all two and a half millennia ago. “Another cause of revolution is difference of races which do not at once acquire a common spirit; for a state is not the growth of a day, any more than it grows out of a multitude brought together by accident. Hence the reception of strangers in colonies, either at the time of their foundation or afterwards, has generally produced revolution; for example, the Achaeans who joined the Troezenians in the foundation of Sybaris, becoming later the more numerous, expelled them; hence the curse fell upon Sybaris.”
We’re on the eve of destruction yet it cannot be denied that, aided and abetted by the traitors in our midst, we have brought it on ourselves. And you know what? Maybe it’s for the best. Seriously. Because if things continue under the Present System our countries will end up as impoverished, faction-riven and violent failed states. “Your country is desolate, your cities are burned with fire: your land, strangers devour it in your presence, and it is desolate, overthrown by strangers.” Isaiah 1:7