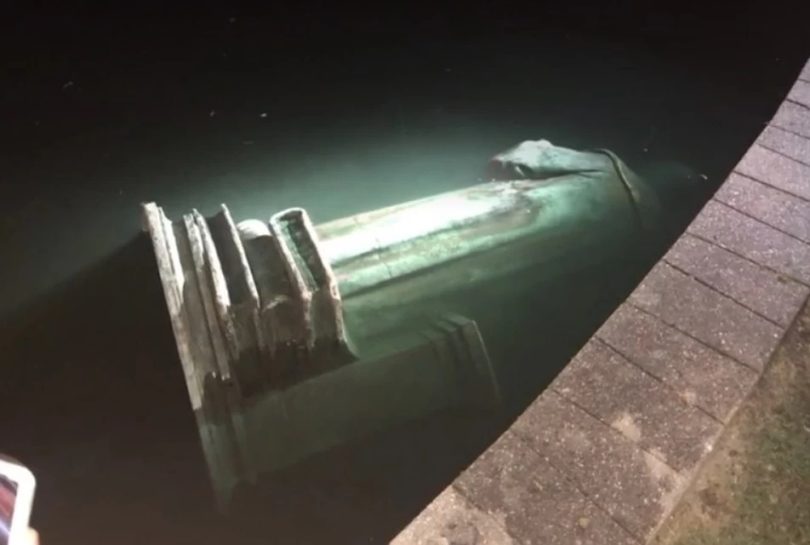 Education Is Offensive and Racist and so is America

Years of teaching blacks to have grievances against white people for things that happened centuries ago have come to fruition. Rioting and looting are not enough, the violent thugs and ignorant woke creatures are pulling down historic monuments in public parks and defacing public buildings while police and public authorities stand down.

In Richmond, Virginia, a statue eight feet tall of Christopher Columbus in a public park has just been pulled down and rolled into a lake by a group of thugs.  Why?  “Columbus represents genocide.”  What the barbarians mean is that by discovering America, Columbus exposed the inhabitants to invasion from abroad, which is what the US has been undergoing since 1965.

Who hasn’t suffered invasions?  Why of all the countless invasions in history is European entry into the new world so upsetting.  Columbus wasn’t looking to invade any country.  He was testing a theory and hoping to find a shorter route to the spice trade.

Any number of Confederate memorials are being pulled down.  Not even Robert E. Lee will be spared.  Are public authorities  so stupid that they do not understand that their acquiescence to lawlessness and destruction of property lets the genie out of the bottle?

The new word for racist is white.  By definition a white person is a racist.  The two words are synonyms.  Every stature of every white person is a statue of a racist and can be pulled down. The Republican-led Senate Armed Services Committee has amended the defense bill to require the US military to rename bases named after anyone who served under the Confederate flag. They don’t understand that as white is a synonym for racist, all whites, including Union officers, are racists. All US military bases will have to be named after blacks or it will be racist.  Grant and Lee were both white and served together fighting for American empire in the war against people of color in Mexico. The only difference between Grant and Lee is that in addition to fighting for American empire against Mexico, Grant also fought for American empire against the South.

History is also being pulled down.  Future historians will be perplexed to find no signs of the racism on which the NY Times says America was founded.

Ignorance is everywhere. RT describes Columbus as “another notorious figure in the history of slavery.”  What!? The year 1492 was long before the black Kindgom of Dahomey created the black slave trade and long before there were any colonies needing a labor force.  But facts no longer matter.  Truth is whatever is emotionally satisfying.

America is said to be a superpower, but its inhabitants collapse in excruciating pain over a mere word. The pain felt by mental and emotional weaklings is so severe that it has caused universities to overthrow academic freedom.  At UCLA, once a university and now a propaganda ministry, a faculty member is under investigation for reading Martin Luther King’s “Letter from Birmingham Jail” to the class he teaches.  The letter (April 16, 1963) was King’s reply to black pastors who expressed their concern to him about his arrival as an outsider to their community to stir up confrontation when they were working to negotiate the achievement of the same goals peaceably. King’s answer was that confrontation sharpens the issue and will aid their negotiations. Creating a crisis, King told the pastors, fosters tension and forces a community to deal with the issue.

Oh, the hurt, the offense!  University administrators have denounced the professor. To keep the controversy going students are urged to come forward with complaints. A town hall will be held to outline future next steps.

Think about this for a minute. According to reports “numerous students plead (sic ) with Professor Ajax Peris to not use the n word.”  But it was King, not Peris, who used the n word. What is the message here?  Does it mean that a white person cannot read out loud Martin Luther King’s letter?  If the professor wanted students to be aware of the letter, would he have to bring in a black guest lecturer to read the letter?  Would the professor still be accused of insensitivity if he gave  Martin Luther King’s letter to the students as a reading assignment?  Does it mean that King himself committed an offense by using the n word?

The professor also showed the class a documentary about lynching. The documentary had graphic descriptions that distressed and angered the students.  Do we have here the plight of what sounds like a leftwing professor trying to rile up blacks against whites and finding that he cannot succeed because the necessary words and images cause them paroxysms of pain?

In our oh-so-sensitive-times, no one is concerned about giving offense to Southerners.  White Republican senators are leading the charge to rename military bases. Not to be outdone, black members of the House want to remove what they call Confederate statues from the vicinity of the Capitol as part of the protest against police violence in Minneapolis. They are having a fit over Jefferson Davis, who for 3 or 4 years of his life was president of the Confederate States of America. Much more of Davis’ life was spent serving the United States of America as a military officer, a US Senator and as US Secretary of War (they were more honest in those days; today they call it “defense”).  Davis was a West Point graduate. As an officer in the US Army he fought for the US empire in the Mexican-American war. It was Davis who led the sucessful charge on the La Teneria fort in the Battle of Monterrey.  He was married to the daughter of US President Zachary Taylor. He argued against secession.  These are the reasons that there is a statue of him.

Davis, like Robert E. Lee, and so many others from Southern states spent their life in service to the United States. They rallied to the Confederacy only because Lincoln invaded their states.  People are so ignorant today, especially those who go around shouting “racist,” that they are unaware that in those days people regarded their home state as their country.  The US Constitution gave governing power to the states, reserving to the states all powers not ennumerated to the federal government.  All of this was changed by Lincoln’s war which consolidated power in Washington and eventually turned largely independent states into vassals of Washington.

Robert E. Lee, a West Point Graduate, spent his life in the US military fighting wars for the US empire. He served as Superintendent of the United States Military Academy. He was so highly regarded that he was offered a Union command in Lincoln’s war. Lee’s response was that as a Virginian, he could not lead an army to invade his country.  If the US was going to invade Virginia, he would have to resign his commission in the US Army.

An ignorant person once wrote in CounterPunch that Lee had 200 slaves.  Lee had no plantation. He spent his life fighting against Indians and Mexicans for the American empire. It did not occur to the peabrain at CounterPunch what a person fighting Indians on the frontier and Mexicans in Mexico would do with 200 slaves.  But as I have often observed, it you are out to demonize someone—Trump, Putin, or Lee—you say whatever does the job.

Lee had to take a leave from the US army for 2 years in order to settle his father-in-law’s estate, which had land holdings and slaves on one side of the ledger and massive debts on the other. The aim was to emancipate the slaves. Knowing that, some slaves pushed it before it could be done. They were punished, and ever since it has been used to blacken Lee who had fiduciary duties.

The current line is that Confederate memorials “pay tribute to white supremacy and slavery,” as the most ignorant Barbara Lee (D, CA) put it.  So, according to a person regarded by people in California of sufficient intelligence and integrity to represent them in Washington, a Southerner who resists the invasion of his country is a white supremacist.

As has been proven so many times, the so-called “Civil War” was fought over economics, not slavery. Lincoln himself intended to send the blacks back to Africa, judging them unfit to live among white people.  Lincoln said over and over that the war was fought to preserve the Union. He gave assurances to the South that they could have slaves as long as they stayed in the Union and paid the tariff. Historians have researched the letters and diaries of participants on both sides of the war and found that soldiers were not fighting for or against slavery. The North was fighting for the Union, and the South was fighting because the South was invaded.  There is a famous book in which the contents of the wartime letters and diaries are recorded.

Yet the real documented history has been replaced with a false made-up history that serves the sole purpose of creating dissention and hatred in a vulnerable and fragile multicultural society.

As I recently wrote using Richard Weaver’s title, ideas have consequences. The stand downs of police and public authorities while criminals loot and destroy are consequences of the false history that has been created for the United States.

The United States is a Tower of Babel from which white people should flee. The state of collapse is advanced. With mayors and governors refusing to protect property from black looters, President Trump threatened to call out the US military.  His own Secretary of Defense, Mark Esper, and his own Chairman of the Joint Chief of Staff, Mark Milley, quickly informed the US military that their duty was to the Constitution, not to the President. The two made a show of this to undercut President Trump and to present him as a tyrant for trying to fulfill his constitutional obligation to protect private property and the lives of citizens.  Apparently, both Esper and Milley are too dumbshit to understand that it is a constitutional duty to protect property.

Trump is not Establishment, but his government is. Trump is a President surrounded by his enemies. Trump attempted to be a president of the people, but the Establishment will not permit it.  Trump will be the last president who attempts to represent the American people.  All future presidents will have learned the lesson in advance. An American president serves the ruling elite and no one else.  The elite have worked long and hard to acquire a divided population that cannot unite against them.  They have succeeded.