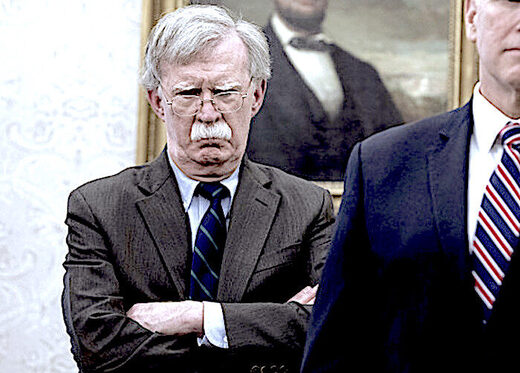 Most Americans don’t have time for the kind of drama that unfolds in Washington D.C. It’s like a twisted soap opera, where the characters range from the unscrupulous media, pesky hangers-on, some life-long parasites in the bureaucracy, and the powerful politicians.

The drama unfolding around John Bolton’s new book just months before the election reveals the establishment’s seething anger at the American people who voted for President Donald Trump and is far more important than people realize.

The former National Security Advisor’s soon-to-be-released memoir — The Room Where It Happened: A White House Memoir contains classified information. It was strategic, of course. Everything about the book, including its release date was planned. The fact that Bolton didn’t testify during the impeachment hearings was also calculated. If what he says is true about President Trump, why didn’t he testify? He didn’t testify because it’s all lies. Writing a book doesn’t require Bolton to be under oath and in the end he figured it would be his word against Trump.

I used to respect Bolton for his long years of service to our nation but now I see him for what he is – a backstabbing liar intent on taking down a president he had given accolades to on the world stage.

That scenario happens frequently in Washington D.C. There’s a saying. “if you want a friend in Washington D.C., get a dog.- Sad but somewhat true. Just look at the tweet with a video compilation of Bolton below by Dan Scavino.

There is nothing worse than a disgruntled, arrogant, egotistical, and all around miserable warmonger who gets fired from their job, and goes to write a book with classified information — while being paid millions of dollars for it. Someone changed their tune, once he was FIRED! pic.twitter.com/IwWyueQGQt

Bolton, however, didn’t plan this battle against Trump alone. He joined forces with the Rhinos, long time political diplomats, politicians, and bureaucrats in both the Republican and Democratic Parties.

They golf together, go on vacation together, misuse your tax dollars without ever thinking about the grueling hours you put into your work to make a life for your family. They dine at the best restaurants and calculate how to take the disruptor down. They then laugh as they leak their lies to the Washington D.C. elite media that despises you for voting for him and then watch many lap it up without question. This group of life-long politicos cares only about themselves and their legacy. They are playing for keeps and to retain power. They use the American people as pawns in their game. We are the chess pieces that they attempt to move.

Bolton is part of that and that’s why the book’s release comes just months before the election. It’s crucial for their continuing disinformation campaign against this administration and it’s lasted now for nearly four years.

Trump is surrounded by scoundrels. He knows it and keeps fighting back. It can’t be easy.

Department of Justice prosecutors are thinking about prosecuting Bolton. They should and will. But Bolton knew that it would come to this and he was prepared for the battle. In the end, all he wants is to drive his political spear into Trump for firing him and aid the President’s enemies in defeating him come November.

Don’t be a pawn of these unscrupulous people. All they want is to remain relevant. Their self-worth is based on their ability to stay in the limelight – meaning they want your attention, need your accolades and once in a while during an election year, they’ll remember you by talking about the hard-working middle class and what they need to do to help you out.

However, that doesn’t mean when they walk down to shake your hands at a rally or kiss your babies on the cheek that they’d want to actually be your friend or really care about your plight in life. No, they don’t. For the most part, the majority of them are self-serving. I should know.

Of course, that’s not everyone in Washington D.C. I don’t want to paint broad strokes with one brush but it’s difficult for people working in the bubble to understand life outside it.

As for President Trump, since the moment I met him in 2016, I knew he was different. I was one of the few that believed he was going to win the election, even on election day when The New York Times said Hillary Clinton would win with 85 percent of the vote.

I spoke to the people coming to see him at the rallies during the 2016 election. Thousands of people would line up and the overflows were huge. In fact, it’s no different today. I particularly remember Wisconsin, Florida, and Pennsylvania and all the wonderful people who showed up to be a part of the democratic process. I spoke with supporters that were Republicans, Democrats, and Independents. All of them felt the same about President Trump. They believed he cared about them, they believed he listened to them and they believed that his word meant something.

The American people were right and that’s why Trump won the election.

Now he is battling for America that he promised the electorate. But his enemies, which now include Bolton, are fighting him with everything in their political arsenal.

Of course, no one is perfect. But Trump cares about the American people. I have personally seen it, spoken with those who’ve worked for him and he’s demonstrated it through his policy and actions.

The elitist just can’t handle what Trump is doing and how he has exposed the decades of lies. He fulfills his campaign promises, while the more groomed politicians and bureaucrats make never-ending unobtainable promises, creating false complicated roadmaps that they say can never be achieved.

This Army of never-Trump activists has spewed lies and divided our nation. They don’t care about you or your families. However, they do want to send you a message: outsiders, especially disrupters are not welcome.

Bolton is one of those Washington D.C. parasites. He thought he could play Trump like a fiddle, but in the end he will lose. The American people are too smart to be fooled.