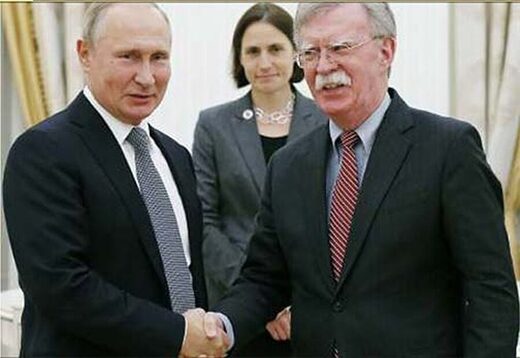 The place where it happens in The Room Where it Happened is the July 2018 Helsinki meeting between Donald Trump and Vladimir Putin. Here Bolton is shaking hands with “the villain.” Well, it was a photo op.

The U.S. Justice Department had just indicted agents of the GRU, the foreign military-intelligence agency of the General Staff of the Russian Armed Forces. It charged them with hacking into the Democratic National Committee computers and releasing the information to influence the 2016 election. The emails showed how the DNC, which was supposed to be neutral, helped Hillary Clinton against Bernie Sanders in the primary.

It is relevant that the U.S. intelligence assessment written in January 2017 said in effect “we have no proof.- See the very last page, Annex B. That’s called burying the lede. No matter. The Justice Department dropped the case, folded, when the Russians contested it and demanded discovery! Actual proof!

And now we know from testimony from the CEO of Crowdstrike, Shaun Henry, whose company examined the DNC server, that he lied when he said the Russians were responsible. Based on his statements, the Mueller report (April 2019) said the GRU “appeared” to have stolen the DNC emails. But in December 2017, more than a year earlier, Henry told the House Intelligence Committee run by Rep. Adam Schiff that there was no evidence of who had “exfiltrated” the data. Schiff kept the testimony secret till it was finally released with testimony of other witnesses in May 2020. So the Russia stole the DNC emails story was fake!

Also fake, the “Magnitsky was a lawyer” story

Bolton writes that Putin offered to try the agents and let Mueller’s investigators (yes, that was still going on) come to Russia for their work, “so long as there was reciprocity with respect to Bill Browder, a businessman whose lawyer in Russia, Sergei Magnitsky, had been arrested and killed by the Putin regime.”

We know that Magnitsky wasn’t a lawyer, Browder admitted in a deposition in U.S. federal court that Magnitsky didn’t go to law school or have a law license. See the clip.

Magnitsky was an accountant who worked for Browder from 1997, handling his tax evasion and fraud against the Russian Treasury. Magnitsky’s 2006 and 2008 testimonies to investigators are marked “Education: higher, ‘economist'” and “Work place: auditor in CJSC ‘Firestone Duncan’.” Browder lies that he was a lawyer he hired in 2007 to deflect attention from his real role over a decade.

We know that Magnitsky got terrible medical treatment in prison, but there is no evidence he was “killed.” See the report of the Physicians for Human Rights, Cambridge, Mass., that Browder commissioned and to which he provided any evidence he could scarf up.

By the way, a pet peeve, the use of the word “regime.” “Regime” means a government the U.S. government doesn’t like. When is the last time you heard the Saudi dictatorship referred to as the Saudi “regime?” Or the Egyptian “regime.” Usually, I tune out anything following that signal of bias, prevalent in the mainstream press. But I continued.

Browder a tax-avoider in the U.S., tax cheat in Russia

Bolton writes that Browder, “now a British citizen, had done well financially in Russia, but Magnitsky’s murder and the actions taken against his investments moved him to launch an international campaign against Moscow.”

Bolton doesn’t wonder why Browder is now a British citizen. Does he care that the IRS called him a “tax expatriate?” Browder shredded his U.S. passport because he had “done well financially” and didn’t want to pay U.S. taxes.

There was no Russian action against his investments, unless he is referring to normal tax collection. But Browder didn’t want to pay taxes in Russia either and filed fraudulent returns claiming $40 million in fake deductions, then ignored court orders to pay, so the Russians refused to renew his visa. CBS reported tongue in cheek, “Officials with the U.S. Department of State had no serious plan to assist Browder find a new home in 2006, after he renounced his American rights for tax reasons.”

More Bolton: “He persuaded Congress to pass a law that enabled the U.S. to sanction Russian human-rights violators; several other countries followed suit.” Actually, the Russian victims were low-level tax investigators, court officials or medical staff. Browder’s goal had nothing to do with human rights, it was to block the Russians from collecting on what now adds up to nearly $400 million in evaded taxes and fraud against the Russian Treasury.

Who gave money to Hillary?

Bolton: “The way Putin saw it, Browder had given Hillary Clinton’s campaign, foundation, and other parts of the Clinton galactic empire some $400 million that he had basically stolen from Russia, which got Trump’s attention. It was all hot air, but Trump was very excited about it.”

There is no transcript of the conversation, and Bolton likely misreports it. In fact, it was Browder’s clients the Ziff Brothers who had contributed to the Democrats, which at that time meant the Clinton campaign. This is the first time I heard the claim Browder or the Ziffs gave money to the Clinton foundation. But there’s the $400 million number which I see in print for the first time! Putin got that right!

Back to the GRU and Mueller. “Putin raised the 1999 Mutual Legal Assistance Treaty. … Putin said Mueller could take advantage of the treaty, and Russia should also be able to take advantage of it to pursue Bill Browder for his alleged crimes, as he had related to Trump during their encounter.”

Yes, that is what Mutual Legal Assistance Treaties (MLATs) are for as used around the world. Bolton appears ignorant of it. He says, “Putin’s description of what might be possible under the treaty was a long way from what it actually provided, but by the time we explained it to the press, Putin had scored his propaganda point.”

Then, “We were hard at work researching the MLAT, confirming the initial view that Putin had totally distorted the treaty, both how it applied to Bill Browder and what Mueller’s team might be able to obtain. It was pure propaganda, Soviet-style.” Here is where details would help.

He doesn’t explain what is or isn’t possible, or why this is about propaganda (it isn’t), or that Putin, not a lawyer, might not have provided a proper legal description, but under the MLATs, the U.S. Justice Department and law ministries around the world provide information to each other. Usually, they share documents. The Russians probably wanted bank documents that showed how Browder moved money stolen from Russia into the world financial system.

The Intelligence Community admits it has no proof

This part, not about Browder, is pretty funny, as Bolton, still working for Trump, needed to pick and choose how to get through the Democrats/MSNBC minefield. He wrote down his advice: Trump should say he supports the intelligence community, that there was never any “Russia collusion [true], and Russian (or any other foreign) meddling is unacceptable.” Which seems to counter the first point, since the intelligence community said in its expansive 2017 report, half hidden in an annex on the last page, that they have no proof of meddling.

Hear my audio of this story on Fault Lines at 1hr 32min into the broadcast.

Lucy Komisar reports on thesecret underbelly of the global financial system — offshore bank and corporate secrecy — and its links to corporate crime; tax evasion by the corporations and the very rich; empowerment of dictators and oligarchs; bribery and corruption; drug and arms trafficking; and terrorism. She was winner of 2010 Gerald Loeb, National Press Club, Sigma Delta Chi, and National Headliner awards for her exposé of Ponzi-schemer Allen Stanford, which she brought to the Miami Herald. The Loeb award is the country’s most prestigious prize for financial journalism.